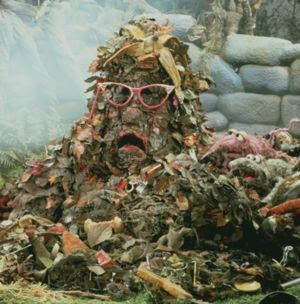 Our readers have been sending in wonderful Halloween costume ideas:


I once wore a brown trash bag with "Hershey" in white letters taped to it and had an aluminum foil hershey's kiss twisted hat. It was quick, inexpensive and required no sewing!

Great idea! I suggested to Sister St. Aloysius that she dress the children as trash. Just cut arm and leg holes in a trash bag and tie the bag up around the neck with the head sticking out. Stuff the bag with old newspapers. You could make a milk carton hat!

She does not care for the idea of dressing children as trash. I think everyone is too sensitive these days. 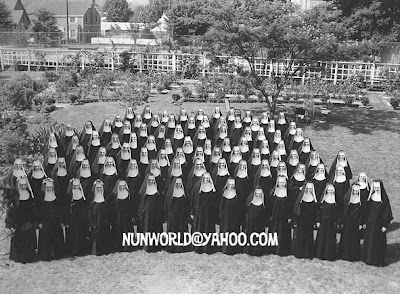 Meanwhile our Nun So Beautiful Non Contest is going very well. And thanks to Sheila for the wonderful name!

You mean there isn't a guy in Kenya who needs me to hold his money for him so he needs my bank account number? Uh-oh. I was hoping to use the money to buy a really cheap Rolex. Another dream dashed. It would have all worked out because so many people have emailed about debt relief.

The Infant of Prague.

You may have noticed that our poll results have our contest ending (by one vote!) on September 30th. At least many people were willing to admit that they are lazy procrastinators.

I am a lazy procrastinator, how did you know? Is it a sin to procrastinate? I've always wondered.

Procrastination is one of those murky areas, sin-wise. It falls into the bad habit category. Bad habits are not sins. Unless they become sins. For example, you can smoke. It's a stupid bad stinky habit, but it doesn't make the sin list. But if you smoke like the Little Engine That Could finally making it to the top of the emphysima hill, you've probably crossed the line into ruining the wonderful body God gave you. Gambling is not a sin. Gambling until you lose your house is a sin. (Somebody tell Fannie Mae and Freddy Mac. Who are they? Do they know each other? Doesn't one of them make great candy?)

At the point where you've put off cleaning your house so long you can't find the baby, maybe you've crossed the line.

On the other hand, don't confuse procrastination with prioritizing.

What if you're sitting around sending me nun pictures when you should be trying to find the baby? That isn't good. By the way, if you've dressed the baby like a bag of trash, he will be even harder to find in your messy house.

Laziness, on the other hand, is always a sin. It's right on the Big List, better known as the Seven Deadly Sins. Sloth.

But don't confuse prioritizing with laziness. There are only so many hours in a day. Though it's never mentioned in the New Testament, I'm pretty sure Jesus slept. He was probably like Thomas Edison, though, and didn't sleep much.

Thomas Edison only slept for an hour or two every so often and even then he just laid on a table in the workroom or something. I envy him.

i think you add more info about it.

ok. I found an information here that i want to look for.


--How about glow-stick halos? Better-looking and safe in case someone goes trick-or-treating a bit late into the night. (Look for the long, bendable kind that come with connectors; Yellow) Just glue the end of the stick into the connector, and glue the connector on a strong object that can hold it, and then put this object on a hair band.

--Simple angel costumes made out of sewn sheets (that meet at a single sewn line from one side to the other, with the top of the sheets only sewn at the arms) with arm holes, cinched at the top of the shoulders (that part you had sewn earlier, now above the arm holes; just use a thin string to tie it together, from arm to neck). Mold some thick wire into a J shape, and sew wing-cut fabric over it. Add a halo.

--Father Time is also made by using the same dress/tunic/whatever, except omitting the wings and halo. Instead, use a fake beard and an hourglass (they're hard to find, so I don't suggest this costume)

--The reaper is, perhaps, the easiest to make (the only hard part is making the hooded robe). Use a single sheet and dye it black. Simply cut and sew as necessary to make a robe. Use a long, strong STICK (yes, a stick! It adds to the effect), and cut a large, half-moon shape out of cardboard and cover it in aluminum foil. Glue the foil-covered cardboard onto the stick and it's good to go. (CHEAP!!)

--I'm just going to stop here because it's already a pretty long post. But if you REALLY want to dress them up in trash (and get away with it), cut arm holes out of an old garbage can with the bottom cut out (use ribbon and hole puncher, and punch 4 holes in the front and back of the can, cris-crossing around front and around back to secure it to the person; remove the handles and place them up to where you just removed the bottom at; glue tin foil to it and press the tin foil in to match the shape of the can), and tell them to wear a green shirt and paint their face green with a big, brown uni-brow; make a big whaite circle around their eyes in white face paint. Did you ever watch Sesame Street? It think it was the Grouch or something.

And there I went, making the post longer. Though, since I've already lengthened the post, might I suggest making a child into pop-art, and, taking a large rectangle of cardboard, score it and fold it into a can shape. paint the outside to look like a soda can or some other round object. (And if you really ARE intent on making them wear trash, turn it into a trash can).

Wow, Sister, thank you - I'm in better shape than I thought I was:)
Thank you, as always, for a wonderful read!

Wasn't Jesus sleeping on the boat when the storm overtook the Disciples? I always picture Him rubbing His eyes, commanding the storm to stop and then laying back down to continue his nap.

I went once as a bag of jelly beans in a long clear plastic bag filled with different coloured balloons and a bow around my neck.

After my sister and I were a little older (I was nine or ten or so) we always made our own from our mom's old clothes.

Hi Sister,
Just wondering what happened to the search function where you could look up saints. Now that school is back in session, can the 8th grade boys help you get it back up? I really enjoyed using that search.
Thanks!

Hmmmmphf....Why did that saint finder disappear? I just tried to add it again...no go. I've contacted the Aquinas bookstore people. Hope they help us!

My name is Carol, so whenever I'm stuck for a costume, I just put on some red and/or green clothing, put a big ribbon in my hair, dig out my jingle bell earrings, and go as a Christmas Carol! I also know an Easter Lily.

Dear Sister, do you know of a particular saint with whom one might ask for a little extra help with a loved one with problems in not being able to see how alcohol problems are usurping life? (Other than that of going straight to the source of strength, or BVM and her Motherliness?)
Thanks,
'mother of alcoholic'

Though I know Sr. A won't approve, how about a white kitchen trash bag and they can go as white trash!!! this is one of my favorites. :)

What I really need to know is this: how many 'extra' sheets do you people have lying around? (and white ones at that!)and do people really spend their time DYING A SHEET BLACK? I feel like I'm watching Martha Stewart!

A friend of mine once dressed her daughter as a bunch of grapes--black turtleneck/pants with purple balloons pinned all over her in a grape-bunch shape and a green stocking cap pulled up high like a stem. She was so cute!

Monica, I could tell you the number of sheets we have in our house, but I'm afraid I just can't count that high; I don't know what comes after "trillion." And besides, my mother has a bad habit of stealing hospital sheets, so we have enough plain white sheets to build a sheet-rope to the moon. Really, we have a closet full, a dresser full, a chest full, and large piles on and around the chest that have a habit of toppling over. We have a pile of sheets and a pile of sheet scraps right next to the sewing machine. We have 8 beds that always have sheets on them, along with extra sheets and a few blankets just in case an ice age hits while you're sleeping. We have so many sheets that we use sheets and blankets as couch and chair covers. We keep sheets in the car in case something gets severed in an accident and the wound needs to be compressed. AND, when my mom sees some, she buys them, and my dad brings them home all the time. So, we have a LOT of sheets.

My sister dressed as white trash once.
Broadcloth of any color can be bought at Wal-mart for a couple of dollars. Cheaper than dying sheets.
I'm kinda locked in on someone stealing sheets from hospitals. How do you even do that?

sister, you never fail to make this old canuck laugh. truly, your a gem! you should be the patron saint of humor:) every time i visit your blog, i smile. :)

For the "mother of an alcoholic", look into the Venerable Matt Talbot.

Anonymous, if you leave wearing a sheet or a blanket, they don't take it back regardless of what you do. Though they know you have it and don't really care, it's still technically stealing. But everyone in my family does it every time we go, since we're all absent-minded sinners.

But it was supposed to be a joke about my mom and the number of times she goes into the hospital, since she is going to be going into the hospital for the millionth time soon for what I know is going to be her last time ever. I try to lessen the burden by laughing about it with her by telling her that she'd better live because we need new sheets. Laughing about the sheets and then hearing someone talk about sheets just made me want to carry the joke over. It never even occurred to me that nobody would understand it. But you know how that is; when you live under certain conditions and for a certain way for so long, you begin to forget that there is a life outside of it all.