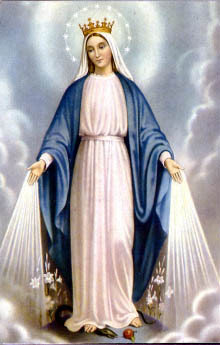 Yesterday was the Feast of the Immaculate Conception. I hope everyone went to Mass. It was a Holy Day of Obligation. If you didn't go to Mass I hope you went to confession and told the priest that you didn't go to Mass. Of course, if you are already skipping Holy Days of Obligation, chances are very good that you are also skirting the confessional.

Do they even have confessionals in your parish? We have them, but confessions are not heard in them. The latest trendy trend is the face to face confession. I can appreciate why so many people dodge that experience. In some ways, avoiding that kind of potential embarrassment is how we arrived at the old confession box.

I love the old confessional. Don't we all have the stories? The person in front of you who talks too loudly in there, the old priest who dozes off. We had one priest when I was a girl who not only dozed, he was just about impossible to wake up again. Especially in the summertime. It wasn't that he was snoring away in there or anything. He just didn't answer. You had to stop periodically and say, "Father? Father!" Then the person next in line would hear you in there. It was a vicious cycle.

I guess it wasn't vicious. It was just a cycle.

The ritual of "Bless me Father for I have sinned..." made the process easy and understandable. You could get out your examination of conscious sin list and run through the Ten Commandments and all the sins you might commit under each one and make a mental or a real list and you were off to the races. Take your lumps, receive absolution, feel better.

Badabing Badaboom, as they say.

Still, I think a lot of people are very uncomfortable with the whole thing. They need to get over it. Sin is supposed to make you uncomfortable. Guilt is a good thing when you are actually guilty.

Ah well. Today's question which refers to my last post about couple's living together.

I am confused what you mean by scandal. Say nothing is going on, and you and your friend know it. And God knows it. We should be all about pleasing God here, so does it really matter if other people think different?

Yes, it does matter. Unless setting a good example has become utterly meaningless. Let's talk about the set up again here so we are all clear. In this particular little 'if/then" equation, we have a couple who is living together who plan to marry but aren't 'doing' anything, living chastely together until the big wedding. 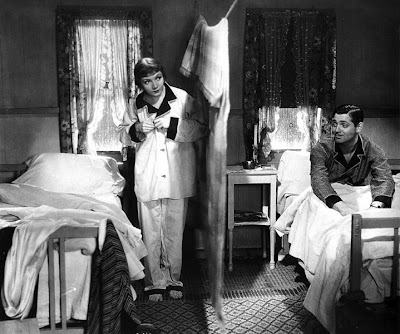 But, for the sake of argument, which is your question, lets' say they actually are doing just that, like some sort of modern day Gable and Cobert "It Happened One Night" behavior. It does matter if other people think differently if what you are doing causes them to sin. Here is what the Catholic Church means by scandal:

2284 Scandal is an attitude or behavior which leads another to do evil. The person who gives scandal becomes his neighbor's tempter. He damages virtue and integrity; he may even draw his brother into spiritual death. Scandal is a grave offense if by deed or omission another is deliberately led into a grave offense.

We can't just sit here and say that a couple in the situation you describe are sinning away and causing other people to sin. We just tend to try to err on the side of caution. As I mentioned, eternity is such a long time. Suppose after Mary and Todd live together and get married, all sin free, Mary's little sister Beulah decides, "Hey, Mary and Todd lived together before they got married and nothing happened. Certainly, Alphonso and I can live together that way, too."

Then Beulah and Alphonso can't cut the mustard. Now what? I'd avoid the whole mess.

And then this:
If a woman chooses to dress in a tank top and skimpy shorts for her own sake, and not to tempt someone into sin (although it seems women have been tempting men into sin since the days of Eve, the poor lambs), and a man is then prompted into sinful thoughts, is it still a sin on the woman's part? Should women be required to dress modestly so as to not inadvertently cause men to have sinful thoughts?

I think maybe tomorrow...we need to talk about the modesty pyramid from skimpy shorts to Burkhas.
Posted by Sister Mary Martha at 4:31 PM

Thanks for the post about Confession. I teach 3rd grade Catechism at my parish and I just might need to read your blog post to the class. Actually, the class is getting ready for their First Confessions and I'm praying and doing my best to prepare them.

In fairness, Sister, no one is forced to make confession face-to-face. Confessionals still have screens, ig the penitent chooses to use one.

We had a BEAUTIFUL mass here in Aggieland for the feast of the Immaculate Conception, and I'm also proud to say we have confessions heard every weekday and Sat! And that's just the scheduled times!

I love hearing Marian songs; we don't get to hear them enough!

I love your blog, keep up the good work :)

We are blessed to have confessions here, also. And long lines!! Many in our parish actually go to a different parish to confession because they don't want to wait an hour or more in line!!
We are so blessed....and I credit it to 24 hour Eucharistic Adoration in our town.

First - I dig the santa hat on your profile.

[ In this particular little 'if/then" equation, we have a couple who is living together who plan to marry but aren't 'doing' anything, living chastely together until the big wedding.

The "Yeah, right" response got me.

Thank you for the wit and wisdom.

About the modesty pyramid:

Isn't it also about appropriateness? Say, if you are on the beach in a swimsuit(not jumping on trampolines, mind you), or at the pool swimming laps, then it's "nothing new" and nothing shocking. But, say if you went walking through the mall or the grocery store in the same swimsuit, then wouldn't you attract some stares of shock?

Also, I'd just like to point out that the women and girls at the FLDS Compound in Texas were very well covered, but that didn't stop some very salacious things from happening.

What is worrying me with scandal and cohabitation is the risk of people thinking one might be in a homosexual relationship.

You haven't found the right man yet, you're living with a platonic female friend, yet it's oh-so-fashionable for girls to bat for both teams. Before you know it, you're creating a scandal. This is worrying me a lot, I had no idea about scandal until I came here.

Sister Martha, we know who authored the first part of the Hail Mary, but who wrote that wonderful second part--Holy Mary Mother of God, pray for us sinners now and at the hour of our death, Amen.

"Mother of God"--it's like a Zen koan, only better. Who wrote it and when? Does anyone know?

I listened to a CD about confession and the speaker pointed out that the physical act of confessing was part of the penance process. He noted that Jesus gave the disciples the power to forgive but didn't give them mind-reading ability too!

I wish I could remember the speaker to give credit where it was due!