Catching Up a Little 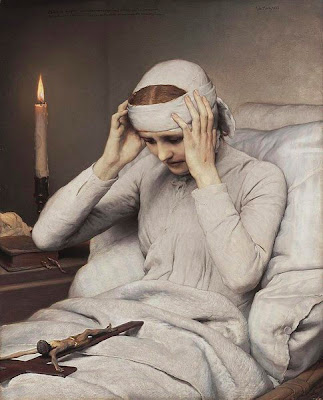 Good morning Sister A question from one of those un-Church-educated children of lapsed Catholics – how exactly do you “offer it up”? Loving your blog!

It's a good thing you asked. You can be offering up your suffering for the future destination of your parents.

We've talked endlessly here on the blog about

So I'll let you catch up on the concept.

Now all you need to do is say a little prayer to let God know if you are offering up your suffering for the Poor Souls in Purgatory, or for the sins of the world or where ever else you may want to send your suffering. Just like putting the check for the electric bill in the Commonwealth Edison envelope and the check for the gas in the Gas Company envelope. 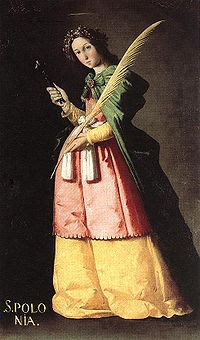 Sister, could you recommend a saint for me to pray to about my daughter's upcoming dental work?

Of course! This is one of those happy occasions where we don't have to extrapolate to find a saint who is sympathetic to the suffering and struggles of the dental impaired. St. Apollonia, the poor thing, had all her teeth knocked out by way of torturing her into giving up her chastity.

Here she is holding a giant pair of pliers, as martyrs are often depicted with the instrument of their torture.

There is some slight discussion about St. Apollonia's actual manner of death. Some feel that her demise really pushes the envelope. Here is what happened: after having all her teeth either knocked out or pulled out, she was given one last chance to 'give in' or be thrown into the fire. They were all standing there right next to the fire, too.

St. Apollonia asked that they not hold her so tight whilst she decided what to do, and when they loosened their grip, she danced off into the flames on her own.

This behavior was not unusual among virgin martyrs. They jumped into oceans and rivers and flames and off of cliffs to remain pure.

Some people call that 'committing suicide'. That would be a mortal sin.

The Catholic Church does not call it suicide. We call it 'extreme vigilance'. Actually, we don't call it that. I've just coined that term this minute, but you get the point.

Even St. Augustine seems to have wrestled with the dilemma:

"But, they say, during the time of persecution certain holy women plunged into the water with the intention of being swept away by the waves and drowned, and thus preserve their threatened chastity. Although they quitted life in this wise, nevertheless they receive high honour as martyrs in the Catholic Church and their feasts are observed with great ceremony. This is a matter on which I dare not pass judgment lightly. For I know not but that the Church was divinely authorized through trustworthy revelations to honour thus the memory of these Christians. It may be that such is the case. May it not be, too, that these acted in such a manner, not through human caprice but on the command of God, not erroneously but through obedience, as we must believe in the case of Samson? When, however, God gives a command and makes it clearly known, who would account obedience there to a crime or condemn such pious devotion and ready service?"

What he is saying here is that the Catholic Church has decided that this is not suicide, so just don't worry yourself about it for another second.

I hope your daughter's teeth have fared better than those of St. Apollonia.
Posted by Sister Mary Martha at 1:01 AM

Sister,
My daughter will be pulling out 6 permanent teeth and my son will be pulling out his 4 wisdom teeth on Thursday. Please pray with us through the intercession of St. Apollonia on that day! I am so grateful that God showed me your blog today with yet another wonderful saint for us in our time of need. I wish i could have been a martyr like some of our saints!
God Bless you Sister! Thanks for saying yes!

Thank you for explaining "offering up." I am a neophite (received my first communion and confirmation at this Easter's vigil), and I still have a lot to learn.

for the faithful Catholic, the learning, growing, and improving in faith never ends. Don't let anyone suggest to you that they've reached the endgame of the Christian life -- that does not happen short of Heaven.

He has not failed me yet, even after 37 years of giving anesthesia.

Sister,
May you include the holy souls in your daily offering in the morning? Just add, I offer all my sufferings today for the salvation of souls? I don't always remember to offer it up in the moment. I'd hate for my sufferings and sacrifices to be wasted.