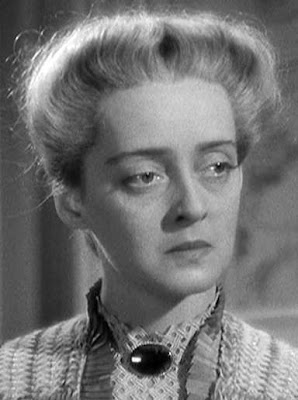 Funny, isn't it, that my last post was about laziness and I haven't answered any questions in almost a week? Was I lazy? I think, maybe, yes. Certainly my attention has been elsewhere with the impending return of Sister St. Aloysius and the exit of Sister Nicholas. I can't find the bottom of the desk. Actually, that isn't correct. I can't find the top of the desk. I don't dare say anything about the state of the desk top because if I do, Sister Nicholas will clean it before I have ended the sentence and I'll never find anything ever again.

School is about to start. We're gearing up the building, the desks, the hallways. We're having meetings and coffee and pastries. We're dotting our i's and crossing our t's.

So on Sunday, after Mass, I did a crossword puzzle, watched a Bette Davis movie called "The Old Maid" and suddenly remembered that someone had asked me this question:

I have a patron saint question for you: I've read of several female saints who wanted to remain single for Christ, but ended up getting married anyway (usually in obedience to their parents.) Are there any saints who had the opposite problem, i.e. they wanted to marry and teach their children to love God, but God never brought them a husband so they had to learn to accept this as His will for them? Thanks!

This a real poser. I have been digging and digging for the answer to this one. The official patron saint for spinsters and old maids is St. Catherine of Alexandria. But she does not fit your criteria. She wanted to remain single. 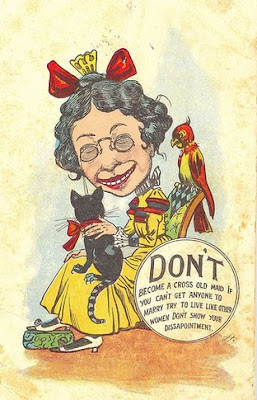 The problem here is that saints, being saints, don't complain. So we don't really know how many of them longed for a family they never had. They shut up about it. There really could be hundreds of them and we just don't know.

Then I remembered poor little Bernadette! St. Bernadette of Lourdes would have liked to just been a mother and a wife. But she realized that, what with Mary visiting her and all, it just wasn't in the cards for her. There always seems to me to be a great sadness hanging over Bernadette. The healing spring was "not for me." She was terribly sick all of her short life. She longed to see Mary again. She was endlessly harassed and disciplined by her superior in the convent. She died in agony. And she really did want to get married and have a family. At least she did before she was whisked off to the convent, a decision made for her by others that she accepted.

I'll have to know more about what a software engineer actually does to find you a patron saint. I only have a vague understanding of the work involved. But I can answer your question about who decides the official patronage of any given saint. 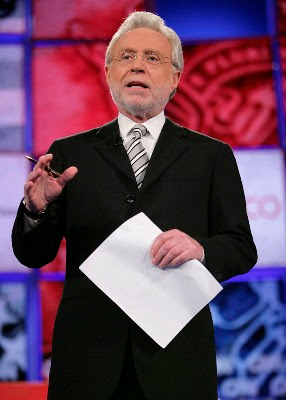 It wouldn't be an easy answer to find, ironically, if it weren't for St. Isidore and I don't mean because we can look the answer up on the internet (which we can!). It's because this information is rarely discussed. But because the Church was looking for a patron saint for the internet Wolf Blizter got to the bottom of the process. I'll let him tell you.

Take it away, Wolf.

And here is why St. Isidore was chosen (copied and pasted from some internet site. I've forgotten what it was or how I found it. The Google, to begin with most certainly.):

The Observation Service for the Internet, who drew it's mission from the Pontifical Council for Social Communications, researched the Internet and related technologies to select a patron saint that best reflects the concerns and ideals of computer designers, programmers and users. The saint chosen by the Observation Service for Internet was Saint Isidore. "The saint who wrote the well-known 'Etymologies' (a type of dictionary), gave his work a structure akin to that of the database. He began a system of thought known today as 'flashes;' it is very modern, notwithstanding the fact it was discovered in the sixth century. Saint Isidore accomplished his work with great coherence: it is complete and its features are complementary in themselves.

I'm wondering if this doesn't cover your job as a software engineer, too. But you tell me.
Posted by Sister Mary Martha at 12:30 PM

For a patron saint of computer programmers/software engineers and similar, I would suggest St. Anslem.

One day, Bertrand Russel was walking across Cambridge, thinking about St. Anselm's ontological proof of the existence of God, when it occurred to him that St. Anselm, according the rules of logic as they were then understood, was correct and had indeed logically proved God's existence. Russell, however, was a very devoted atheist and the idea that God's existence was proved bothered him rather badly; so badly, that he and his colleagues (Whitehead, Quine, Wittgenstein, Godel et al.) got together and by probing into the functional mechanisms behind the then current understanding of formal/deductive logic, discovered new modes of logic (e.g., modal logic) that enabled them not only to prove that counting works (that is, prove the existence of the number one and its progression by addition to two - this is actually much more complex than it sounds) but also to disprove St. Anselm's ontological proof.
All the new logical operations that they discovered enabled Turing to create the forerunner of the computer because it was now proved that counting existed as a necessary part of the world. Without such proof, one cannot have binary operations and without binary operations, no computers.

This is a rather odd reasoning for why St. Anselm should be considered but then the (informal) logic that decides who is the patron saint of what is often odd. St. Agatha and unmarried women, for example. Anyhow, since St. Anselm set off the chain of events in the intellectual world that led directly to the development of computers and computer codes (albeit by means of a bunch of rabid atheists), he seems to me to be worthy of consideration as the patron saint of software engineers.

Old Wolf's explanation was extremely helpful. All I need to do is persuade an Italian website to have another vote for Patron Saint of Software Engineers and Computer Programmers, and then rig it so that St. Thomas Aquinas wins. Hmmmm.

I like the story about Bertand Russell and St. Anselm; if I were looking for a patron, he'd be a good choice. As I've already adopted St. Thomas, I think I'll stick with him.

Life as a software engineer is all about carefully defining terms, distinguishing carefully between similar things, defining abstractions of no interest to non-software engineers (and often only of interest to those working on the same piece of software), and like that. It's a similar set of skills, I think, to that St. Thomas used in his work.

Anyway, thanks very much!

Any idea how to contact the Congregation for Divine Worship? They seem to be the ones who made the decision about St. Isidore, but the Vatican web site is short on contact information.

Snail mail address for the Congregation for Divine Worship:

St. Isidore of Seville who is the patron saint of the internet was a 6th century Bishop while St. Isidro (Isidore in English) was a 15th century peasant farmer who's feast day is May 15 in Spain or March 22 in America. He is the patron of farmers, gardeners, land deals,the National Catholic Rural Life Conference and with his sainted wife patrons of parents of deceased children. Guess you know which one I spend more time with.

Excuse me, I accidentally deleted a word in the address above. The third line should be:

There is also an email address that can be used for this sort of correspondence: benedictxvi@vatican.va

No need to worry that you might be bothering His Holiness (lol) - all email is read and routed to the appropriate recipient by the staff.

I still vote for St. Anselm! And I disagree that the Scholastics, particularly Aquinas, were really all that abstruse - please forgive me for this, it is the bachelor's degree in philosophy leaking out all over the place. It's meant to come across in the spirit of debate, not of picking on anyone but it is hard to get the tone right over a comment sometimes.

The Pope has an e-mail address...

I can dash off a few words and instantly send it to His Holiness via the internet...

Sister, thank you for recommending Saint Isidore as the patron saint of computer programmers.

I had been trying to solve a coding problem for 3 hours. Then I thought of how St. Anthony always aids me with his intercession when I lose something. So I went on the internet to search and found your blog. What a treasure!

And no sooner had I prayed for St. Isidore's intercession than the solution popped in my mind! Wow!

I've just subscribed to your blog.