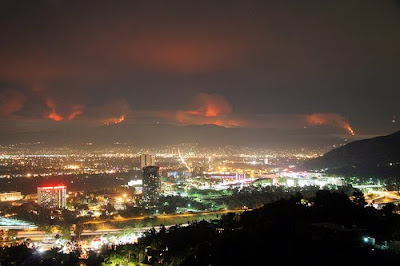 The fires are still raging, but they no longer seem to be bothering anyone. We do hope all the rabbits and squirrels have gotten ahead of the flames.

We're having a nice holiday and the beastly hot spell has finally broken. A good time to talk about Hell.

Why is it that God is happy to forgive our sins before we die, but we don't get a chance to repent after we die? Or, why aren't people who are currently in hell given a chance to repent their sins? What I'm trying to say is that it seems odd to me that an infinitely compassionate God refuse to forgive people after they die. Mind shedding a little light on this for me?

I understand you. It does seem harsh. I do believe I can shed some light, but I'm not sure my answer will satisfy.

To begin with, God does not put you in hell, you go there. God never turns away from you because you sin. Sin is when you turn away from God.

The easy answer would be to say, "You have had your whole life to repent your sins. If you haven't done it by now, what makes you think you're going to do it after you die?"

But, and here is where you and I are on the same page, eternity is a very long time. For example, let's just say for the sake of argument, that Hitler is in Hell. (The Catholic Church never says anyone is in Hell, not even Hitler, because at the last second he could have said to himself, "What was I thinking?!" and gotten himself a very, very long sentence in Purgatory. In another side note, my grade school nuns always told us that Pontius Pilate was in Purgatory until the end of time. Since we actually have no idea who is in or out of Purgatory, we can safely say that those nuns were just making that up.) And now that we have Hitler in Hell, let's give him a sentence of one million years for each individual he so much as made uncomfortable. We're making this up, so let's given him a billion years for every person that died because of him, which would also include all the war dead on both sides and causalities of the war and people who died of a broken heart thereafter.

That's millions and billions of years. Eternity is longer than that.

I will admit that it is hard for me to imagine that there is anything you could do on the earth, even if you were Hitler, that would merit that as punishment. On top of which, you are only human. You only have what brains you were given and what ever kind of paltry education or terrible parents or rotten neighborhood you have had to work with in your quest for God or lack thereof.

And the Church teaches that if you die with one mortal sin on your soul, you're right there with the same Hell sentence as Hitler.

At this point we have to chalk this one up to "It's a Sacred Mystery" (which is Catholic for "just let it go").

But here is where I think I can help, just a little. This, too is a made up story, but I think it at least sheds some light on how people do end up in Hell forever.

Late one night when I was up with Sister Mary Fiacre (she sometimes needs tending at all hours), I was listening to a very silly radio show. Silly enough to be fascinating. Anyone ever listen to Art Bell? He has a program where people come on and talk about ghosts and UFO's and the like. One night he was doing a program about how a giant spaceship was lurking behind a giant meteor and would arrive here soon, for example. (This isn't' the made up part. I really did hear this radio show.)

This particular evening his guest was one of those people who had been brought back from death. You've heard some of these stories, I'm sure. The person is dead and they are going into the light and Jesus or their grandmother beckons them but tells them they are not going to stay right now and then the person is back in the ER wishing they were dead because it's so nice up there.

This woman had died quite a number of times. She had some illness or chronic condition or whatever and she had died seven times or more and on more than one of these occasions she did not go visit Jesus or her grandmother but had gone to Hell. 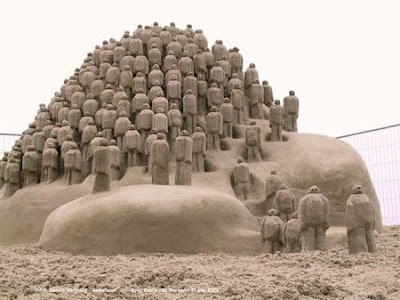 She said that she was on a 'cat walk' above a vast desert where people below, lots and lots of people, were endlessly digging in the sand, the hole they dug just refilling. She said that she was aware of two things: that she was merely being shown this and not be staying, and that these people could leave anytime they wanted to, but they just didn't.

And this is Hell.

Although I realize that this is not a true story, it struck me as a marvelous vision of why Hell would be eternal. Because even if you could leave, you wouldn't.

Think of the person you dislike the most, someone you despise, even. It doesn't have to be someone you shake hands with at Church (or refuse their hand). It could be the President or Hitler. Now imagine that, much to your surprise, if you make it to heaven, that person will be there. Still can't shake their hand? 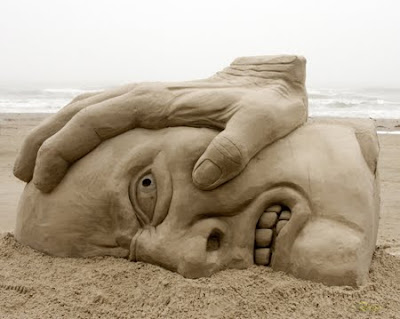 You are digging sand.

Sitting through Mass wincing at the hymn selection and the woman next to you who insists on saying the rosary through the whole thing?

You are digging sand.

What makes you think things will suddenly be different when you're dead?

Posted by Sister Mary Martha at 10:18 AM

I've heard it said that we are the ones that choose hell rather than God's mercy. I've also heard that part of the reason that there is no repentance after death because it is our "final answer". Once we're dead, we finally have all the facts, so we won't be changing our minds.

This lady's idea of hell reminds me of the vision that the Venerable Bede put in his History of England.

Essentially, a person saw on one side great flames and on the other, a field of snow. In between them were people running constantly from one side to another, either cooling from the flames or warming from the snow.

That is an interesting idea of hell.
I wonder if it is different for different people? I am thinking of the great chasms mentioned in the bible and the story of the rich man that Jesus tells. He indicated he wanted to go back and warn others...

It's like what C.S. Lewis wrote in The Last Battle. When the end of Narnia came, Aslan (aka Jesus) led everyone into heaven but some of the dwarves refused to believe it. Instead they were convinced that when they went through the door that they just entered a dark, dingy tent. So, while everyone else literally frolicked around them in paradise the dwarves just sat there blind to it all.

I love this post. I am going to keep it and share it with others. Love. it.

Digging sand....wow.. I like that. Something to think about. In fact, something to meditate on. That's deep.

I was thinking of C.S. Lewis, but Te Great Divorce. Hell is a tiny crack in the whole of creation, and those who dwell there can take a bus trip to heaven - actually a great plain on the way to heaven. And they can stay. But only one does.

great answer, but scary to think about us choosing to stay there digging the sand. i guess that is what sin is, a choice to not do the right thing, but this definitely illustrates it well.

You do not get to know in advance how long your lifetime is going to be.

If you have a lifetime habit of avoiding God, it's going to be very hard to break it at the very last moment.

Brava, sister, brava!! With your kind permission I will read this to my young adults.

OH course you have my permission...I've already posted it on the INTERNET.