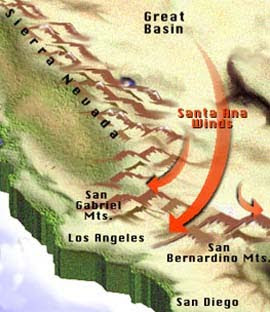 Every year at this time, the weather cools off for a little while and then at the end of September gets very hot again. Then we have our little 'fall'. Fall for you might mean 50 degree weather gradually dipping into 40 degree weather. Fall for us means it's not 102 any more and the daytime weather is in the 70's.

The reason it gets hot is because of St. Ann.

It's not really. The winds that are blowing hot air in from the east are called the "Santa Ana's". I never thought for one second about St. Ann. I took French in high school and the poor beleaguered French nun wasn't very good at her job of teaching. She was very good at French. She just didn't seem to know how to teach it to someone else. Poor thing.

So much is in Spanish here that you forget the words have meaning in another language. For example, yesterday we took a field trip to the famous La Brea Tar Pits. There is a museum there with the bones of literally millions of animals who have gotten themselves stuck in the tar for the last 25,ooo years or so. Mastodons and saber toothed cats and extinct wolves lived alongside human beings. Only one human being was ever found in the tar. A little cave woman who had her head bashed in.

And it isn't really tar, by the way. Tar is a man made product. It is thick gooey petroleum. It looks and smells just like tar.

And what does "La Brea" mean in Spanish? It means "the tar". So when you say "The La Brea Tar Pits" you are really saying "The The Tar Tar Pits".

No wonder I didn't actually think about St. Ann when this year's winds blew in again. Today, someone asked me who St. Ann was and why does she have these hot winds.

St. Ann is the patron saint of seamstresses and Grandmas. Are grandmas full of hot air?

I think the winds are called Santa Anas because that's the direction in which they blow, east from Santa Ana.

Alright...time for today's question, which I am not happy to answer:

Sister, I love the blog! I have a quick question for you. I work in religious education and youth ministry and I'm planning to incorporate the (excellent) Theology of the Body for Teens curriculum into my programs for my high school students, and I've been reviewing the topics. The end of the program, after building up a good foundation of authentic sexuality, contains a segment on vocations and how our sexuality honors God in different ways through marriage/religious life/priesthood. The marriage section is the easiest to explain, since that's the most common vocation kids see. I can easily explain priesthood as a "marriage" between a priest and the Church because he acts in persona christi, and can explain religious women's vows because they are brides of Christ. However, I'm a little stuck about how to explain religious brothers. True, we're all destined to be brides of Christ in heaven, but that's easier for girls to relate to than guys. Since brothers aren't acting as priests do and aren't "married" to the Church, how do I explain their vows and their importance to the Church? Thanks so much! Maggie

Here's how I would explain it, but I don't think it's going to be helpful in any way. 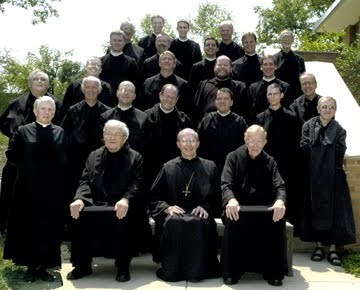 Religious brothers focus all their attention on God. It's really not rocket science. Everything doesn't have to be explained through the narrow prism of marriage, which is only one type of deep relationship.

Some of the deepest relationships you will ever have do not involve sex. The relationship of parent to child, the relationships between sisters and brothers, the relationship you have with your closest friend. I would venture a guess that many people will share certain secrets with their best friends that they do not share with their spouses. And that is perfectly healthy. I believe it is often helps a wife not swat her husband in the head with the skillet on any given morning and vice versa, because someone has been able to vent a little to a sympathetic ear.

They are called 'brothers' because the brotherly bond they share is helping each other to be closer to God. Sisters have that going on as well. They are a type of family.

Why are they important to the church? Didn't they invent beer? 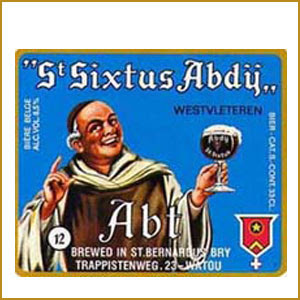 No, they didn't. I think the Egyptians did that, although I did hear a story that some brothers invented beer (maybe they didn't know the Egyptians had beaten them to it) and realized that it could make you a bit tipsy. So they asked the Holy Father if it was okay to to drink it and they sent him some. The Holy Father thought it tasted awful (there are people in the world who do not like beer...raises hand) and figured that no one would ever want very much of the terrible stuff and gave it the green light.

At least one would hope that would be the case.
Posted by Sister Mary Martha at 12:18 PM

Sister MM - this last post of yours is really going to cost me. Almost every day, one of my co-workers, students, or neighbors accuses me of being... YOU! We have way too much in common. (So for all the folks out there who think Sister Mary Martha can't possibly be a real Sister - guess again!)
I've lived in Southern Ca, my community's diocese is Peoria, I'm a huge basketball fan, our cat looks like your Teddy (RIP) except she's female (oh, the redundancy!) and I put down a cat last January, right around the time you announced Teddy's passing. My father was sick when your mother was sick. A sister was visiting us right around the time of your last stint with Sr. Nicholas. I am a teacher, and (honest to Pete) last week I attended an out-of-state conference with one of our sisters. While there, we met up with one of my 3rd order friends who happens to be a rocket scientist. One of our favorite expressions, of course, is "It's not rocket science!" You seem to use every other expression I am fond of using, and right around the same time someone overhears me using it!
To make a long story short, everyone in my neck of the woods thinks you are an actual Sister - except me. There's just no way there can be TWO of us!

Prayers to all,
The Real (or, at least, 'the other') Sister MM

The best beer is by the monks its called Chimay :) and they also make an awesome cheese.

Nah! Nektar (written in cyrillic it looks like Hekwap) is the best. It was made by Trappists in Banja Luka Bosnia, but unfortunately has been bought by another company

Saints Alive! Those last three comments are telling. Was the main point of your article BEER? Did we not learn about the "main idea" in grammar school? The poor heathens (shakes her head)- must be public school graduates. For what it's worth, I could have sworn you were writing about the various states of life: priesthood, religious life, marriage. Poor, misguided me. Old fool!

Once agin you have explained something that seems complex in a very down to earth fashion. I so appreciate reading your blog. I've learned a lot about our Catholic faith.

good beer is good in all vocational state

PS i was Jesuit educated

You said that sex wasn't everything, maybe some people think alcohol is BETTER hence three comments.

Names such as the La Brea Tar Pits are called pleonasms. The Sahara Desert, Lake Dal (India), Mount Fuji and the Ouse River are just a few of the many examples of pleonasms (just in case you want to wow the seventh-graders with your erudition). Torpenhow Hill in Cumbria, England is another - 'tor', 'pen', and 'how' all mean hill as, of course, does 'hill.'