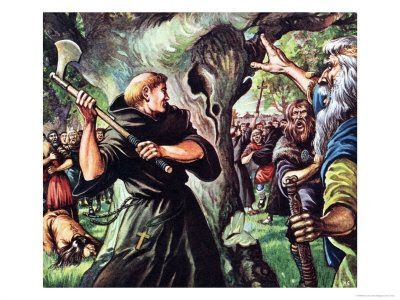 We've had quite the discussion in the comments section, over the workplace 'witch'.

Says Carlos:Well, if she says that she is a witch, then she is most likely a Wiccan, which is a pagan religion whose participants call themselves witches. I wouldn't insult her faith because that may get you in trouble at work yourself. I think "spells" are a form of prayer for that religion.

I think you should be charitable in how you deal with her, but make it clear that you're not interested (assuming you're not). You should pray for her as well.

I believe I also said we shouldn't be sarcastic and that we should pray for her. But the discussion continues:

I agree with Carlos. "Witch" is not just a fantasy creature like unicorns. Wiccans, and many Pagans in general, use the terms "witch" and "warlock" to describe their role in their faith. I can tell you from personal experience that calling her silly and telling her you'll pray for her is the number one way to guarantee she will never EVER listen to anything a Christian has to say ever again and will, in fact, make sure all of her friends know to hate Christians as well. Again, personal experience. I know a number of pagan people who decided to invest firmly in that faith because of the final straw when the Christians treated them with mocking and disrespect. 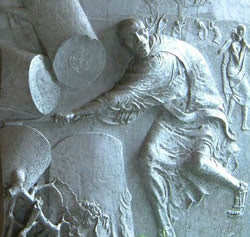 One main idea that many pagans (Wiccans especially) hold as a foundation is "An harm none". If you need to talk to this co-worker in her language, you could point out that doing something to you ("casting spells") against your will is harmful. Ignore the fact that we don't believe in spells... she obviously does. She needs a reason to stop that makes sense to *her*. The best way to get through to her may be you taking the time to figure out some of her faith language.

Wiccans brought me back to Christ after a traumatic absense. Most of them have a firmer and stronger faith than many Christians I know; it's just faith in the wrong thing. I really hate to see when a loving group of people such as these are attacked or demeaned by those who don't take the time to understand.

Carlos is correct: Wiccans consider themselves witches and telling them there is no such things as witches is insulting to them, and frankly, naive. It's too big and serious a thing to be brushed off so easily. http://en.wikipedia.org/wiki/Wicca Sorry, Sister, but I think you're way off on #1. However, I believe #2 and #3 are both excellent advice.

I beg to differ. Witches are indeed fantasy creatures. Perhaps not like a unicorn, though, and more on a par with vampires and werewolves.

I can call myself a vampire until my face turns blue. I can dress up and go to vampire nightclubs and rob blood banks and drink blood and go to a dentist and have my canine teeth filed to razor points.

I'm still not a vampire. I'm just a poor sad person who thought it was cool to have my teeth filed and run around looking scary. I will not live forever, be burned to ashes by exposure to the sun, turn other people into vampires by biting them, not be reflected in a mirror, have super strength or turn myself into a bat. 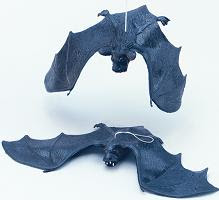 Although, a lot of people seem to think I can turn myself into a bat or that I already am one.

In any case, if you come up to me and tell me you're a vampire, I don't have to give you a big speech and say that I think you are a poor sad person who is trying to be hip or that you are looking for some sort of power in life that you are very sadly lacking and that you couldn't be barking louder up the most wrong of trees. But I think it's legitimate to mention to you that there really is no such thing as a vampire.

So even if I am part of a group that calls itself "Wiccans" and as a girl Wiccan I call myself a witch, the truth is, I am not a witch. I have no power over anyone. There is no such thing as a love potion or a love spell, so it really doesn't matter what I call myself when I 'cast' one.

Power comes from God. Not from a love of nature or dancing around in the forest or crystals or the roots of plants.

A person can certainly run around and do evil in the world. But said person will have no actual power over you except the powers of persuasion.

And a person can do evil in the world by running around worshipping nature instead of God, who made nature, by getting other people to follow along, thus taking those people away from their relationship with God.

I especially disagree that telling this poor girl she is silly is in any way a disservice to her. I expressly stated that there is no reason to be unkind or sarcastic. I didn't say, "Tell her to go find someone more gullible and cast her spell on that poor sap." But telling her that it is silly to believe that her love potion has any sort of power, that is the truth in its simplest form.

Where is St. Boniface when we need him? The Germans were worshipping a big tree, "The Tree of Thor". Boniface went a lot farther than telling them it was silly. He chopped the tree down. The Germans were quaking in their boots for a minute there, waiting for Thor to strike them all down. When Thor was no where to be found after the incident, St. Boniface had an instant Catholic parish.

We're not chopping her tree down here, as much as we would love to do that. We are just stating two facts: there are no people, except Catholic priests, with any kind of supernatural powers, and it is actually against the law to harass people at work with your 'religion', even if it turns out that your religion is the One True Church. As I said, you can't have a shrine to Our Lady of Guadalupe on her desk and she can't run around being a "witch" casting "spells". Not at work.

Posted by Sister Mary Martha at 11:26 AM

I have a few friends who are Wiccan/Pagan who I have been having trouble dealing with lately (although I have more of a problem with their lack of accurate historical knowledge than with their "magic"). I know they have no power, yet your advice about them having no real power sort of helped me put it in perspective. :)

On a side, but related, note, have you ever heard anyone say one of the following:
1) Catholic saints are based on Pagan goddesses (and gods)
2) St. Patrick killed hundreds of people in Ireland.

I'm fairly sure both are quite false (in that (1) saints are/were real people whereas gods/goddesses are based on... myth/natural phenomena I suppose and that (2) Ireland had almost no martyrs during conversion except Patrick's wagon driver, but that was for political reasons, I think). At first I thought these statements were just silly, but I've heard at least three different people (who I'm fairy sure have never met) say them at different times. All three, strangely, identifid themselves as Pagans.

I find that troubling. I do pray about it, but such misinformation seems, I guess, overwhelming to me. Do you have any advice, either for my own peace of mind or for what I can say to my friends about it?

Hello Sister!
Can we get back to something you said while teaching about the detente? You said the Church discourages us from asking for the intercessory prayers of dead friends and relatives.
However, the introduction of the Novena for the Relief of the Poor Souls in Purgatory states "charity for the Poor Souls is profitable to the living as well as to the dead." St Alphonsus stated "...They are unable to pray or merit anything for themselves, yet, when they pray for others they are heard by God."
There are other examples of saints who obtained many favors by the prayers of the Poor Souls. The link is here: http://www.breviary.net/allsoulsguild/novena/introduction.htm
I have an original paper copy with Imprimatur and Nihil obstat quominus septima vice edatur which I believe indicates the contents of the booklet have been reviewed and found to be free of any material contrary to Church teaching.

Great commentary Sister! I don't work with any Wiccans (that I know of) but I did once have a Hell's Angel co-worker tell me she had threatened to have another co-workers legs chopped off by the time he got home! All because she perceived he slighted her.

Dear sister,
I am behind you 100% on every bit of your post. Wicca is a simple-minded, silly, made up religion. (No, I do not advocate making fun of or belittling anyone in public.) They claim it to be ancient, however, there is no proof of ANY historic link between wicca and any form paganism in ancient Europe. Like you said, no matter how many times you wish something to be so, doesn't make it so.

*******
I just had to say something to Mary Rose:
Have you (or your friends) read any of the stories about the "gods and goddesses"? I have. Just compare those immoral tales of patricide, fratricide, rape, "heroic" suicides, adulteries, pointless wars, etc to martyrdoms, chasted lives, pious acts, miracles, etc. Really is there a comparison?

This falsehood goes hand in hand with the age-old false accusation that Catholics worship saints just as the pagans once worshipped the gods.

As St. Augustine said, "For all that, we Christians do not assign to the martyrs [saints] temples, priests, ceremonies and sacrifices. They are not gods for us; THEIR GOD IS OUR GOD. We certainly honour the memory of our martyrs, as holy men of God, who have contended for the truth as far as the death of their bodies, so that the true religion might be made known and fiction and falsehood convicted." ('City of God', Bk 8, ch. 27)

As for St. Patrick, that is the most ridiculous lie I've heard yet. I thought it outrageous when I found at least two non-Catholic homeschool art project and holiday sources tried to claim that St. Patrick was not Catholic. Supposedly because they cannot find in any of his writings where he mentions the Church. Why would he? In his time, Christian = Catholic. Additionally, the fact that St. Patrick was made a bishop of the Catholic Church before he went back to Ireland, seems to have escaped the notice of many who have not actually studied history. I have not see a SHRED of evidence that St. Patrick had anything to do with ANY killing. It is simply politically correct (to them) historical revisionist balderdash.

Thanks cathmom5! I'm glad to know I'm not the only one who was shocked by what my friends said :)

Thanks for all this information. It is highly informative.