I Am the Immaculate Conception 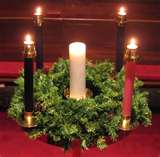 My face is as red as my Santa hat. I apologize for not visiting with you all during such an important time in the Catholic Calendar and I totally missed out on The Feast of the Immaculate Conception (which is a Holy Day of Obligation, which means your presence was mandatory at Mass) and Pink Sunday.

Rose Sunday. Pink candle on your advent wreath. Advent is flying by isn't it? A time of preparation and there is no time to prepare! Old nuns can't keep up.

Happily we have our readers to keep us in line:

Dear Sister Mary Martha,
I am a cradle Catholic now in my third year of college. My friends are very supportive of my beliefs, though very few are also Catholic. I get a lot of questions that I can't often answer to my satisfaction. Today was no exception.
How do I explain the Assumption of Mary and the Immaculate Conception to my non-Catholic friends? I feel like a poor example of the faith when I can't answer their questions.


It would help enormously if we knew what their question actually were.  Let's hope they were asking because they saw you headed for Mass on Dec. 8th.


I have had some knock down drag outs over the Immaculate Conception. I actually had a woman who teaches RCIA classes tell me that I was wrong in stating that the Immaculate Conception means that Mary was conceived without the stain of Original Sin on her soul. If it wasn't a sin, I would have clonked her on the head with the Catechism of the Catholic Church.  Although it wouldn't have done much good, since I only have the paper back version.


Then quite a few years go by. Mary lives at the temple, she learns to sew seamless garments, she leaves the temple and gets married.


Then and angel visits her to tell her that she is to be the mother of Jesus.  (We call this "The Annunciation.) She becomes pregnant in a way that no one ever has and gives birth to Jesus.

I find the time line clears things up for most people, misguided catechism teachers not withstanding.


If they want to know how we know this,  you're going to be knee deep in some thick theology. I suggest you order a pitcher right off the bat. They're going to want to know 'where in the Bible it says this', and of course, the words  "Immaculate Conception" are not in there.  The Catholic Church has always maintained that Mary was born free from Original Sin, because that makes sense since she was the Mother of Jesus. Jesus is also God, so He is not going to have Original Sin. But Original Sin is passed on to each person born of the human race.  So it makes perfect sense that Mary couldn't pass Original Sin onto Jesus, so she was born without it. 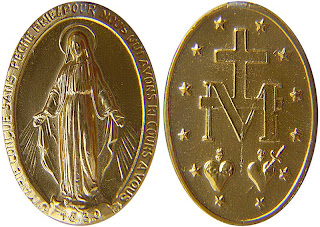 Mary also showed St. Catherine LaBoure a picture of a medal Mary wanted Catherine to make. The medal said, "Oh Mary, conceived without sin, pray for us who have recourse to thee."

So, straight from the horse's mouth on this one.


You'll need a keg for The Assumption.

God Bless your steps, your prayers, your readings and lectures and of course God Bless also all of us, Their children, starving for Salvation!

Stay in His Peace!!
You, Sister, and All Your Readers!!

I would actually suggest that the Assumption is easier than the Immaculate Conception, because at least there is scriptural precedent for people (Enoch and Elijah) being assumed into heaven...and they weren't parents to God.

The Gospel for the feast is confusing, but it's also the Biblical support for the doctrine of the Immaculate Conception. The angel called Mary "full of grace" which could only be true if she were actually full of grace.

May I also make the suggestion that if you're trying to field questions from non-Catholics, you might find it helpful to learn as much apologetics as you can, or at least learn where to point your question-askers. There are many, many good apologetics websites, and lots of good books. If you can't or don't care to learn it yourself, at least learn where to send people for answers. I would not have converted without the influence of Catholics who had gone to the trouble to learn these things.

I thought Mary got pregnant with Jesus before she married Joseph - no? At least, that's the way it was presented in the movie "The Nativity". If they had already married, wouldn't they have consummated their marriage?

Revelation 12 is the best evidence of the Assumption of Mary.
Sister, while the topic is on Mary, could you please explain the Greek name for Christmas, Synaxis of the Theotokos?

I have to say sister that you make me laugh - you make me smile and I love reading everything you write. Since I am not Catholic yet I am devoted to Mary (She showed up in a dream and told me to wear a miraculous medal and make rosaries so who am I to argue with that or Her?) I am learning an awful lot from you. So thank you for all you do!!

@Anon. Sister might clarify this better, but 1st-century Jewish marriage was quite different from our modern understanding. This is how I expect things would go:
Young Jewish Boy thinks to himself, "I'm ready to have a family. And wow, that girl is pretty and modest and from a good family. I should find out her name and if her dad is interested in marrying her off."
YJB and Dad sit down and work out a dowry plan.
Dad introduces (or reintroduces, if they live in a small community and already know each other) YJB to the pretty girl. They exchange "vows" that they will be chaste in their engagement and plan to marry in a little while.
But meanwhile, YJB has to prove that he can provide for the girl and their future kids. So off he goes to build a house, or a special section off his parents' house if he can't afford his own, and then, only then, when it's done and he can provide for his bride, can he bring home his betrothed, officially complete the vow ceremony (=marriage) and THEN they could consummate their marriage.
(because marriage = sex = babies, so it would be silly to consummate before he could prove he was an able provider)

So, as in the Scripture it says, "When his mother Mary was betrothed to Joseph, but before they lived together, she was found with child through the holy Spirit." (Matthew 1:18), it's referring to their state of matrimony pre-living together.

(though the doctrine of Mary's perpetual virginity- something infalliably held by we Catholics -- will inevitably be a smart Protestant's next shriek of protest, I will leave it to Sister to explain that one should the need arise)

Sister! Greetings from Bethlehem!!! Did you know we have only about 2% of the population that is Christian, and we used to be the majority? Please pray for us. Many Christians have left the Holy Land because of the hostility toward Christians.

I thought the "virgin birth" referred to the birth of Jesus, not his conception, otherwise, wouldn't it be the virginal conception? I thought St. Augustine taught that Jesus passed through the virgin's womb without opening it, just as the risen Christ escaped the tomb without breaking the seal. Since part of the punishment for Eve's part in the fall involved bearing children in pain, and Mary had no part in Original Sin, she gave birth without pain. Hence, the virginal birth event.

Thanks Maggie. That does clarify it a little, it just seems like in Sister's post it says they were married, as in said their final vows and everything. I thought they were betrothed but had NOT said their final vows to each other yet. And no need to hand off the virginity part to SMM - I am 10000% Catholic and have always been, and I believe it no question!! So I am included in your "we Catholics" part!! Just a little confused by the order in the post.

Hello Sister,
I converted to Catholicism a couple years ago. This was a hard concept for me. I was able to understand the Imacculate Conception better by looking at the connection between the Ark of the Covenant and Mary- the new Ark. The Ark had to be pure, perfect, without flaw and this is also true for Mary. This typology helped me immensely. I know that some things will always be mysteries, but I love this connection to why she had to be perfect.