Have you procured a keg for today's discussion?

Readers have weighed in with the notion that the Assumption of Mary is much more easily explained that the Immaculate Conception.  On the face of it that's certainly true. To begin with, you won't be up against years of misinformation and bad football related jokes about great catches of long passes. You won't have to talk about people who do not appear in the New Testament (Mary's parents) and you won't have to mention sex for any reason.  Bonus.

We like to begin our discussion with the question: How many chairs do they need in Heaven?  The answer is, two.  There are two people who went to Heaven body and soul, Jesus and Mary.  Yes, Elijah went to Heaven in a fiery chariot, but we think he burned up in the atmosphere on the way there.

The Assumption of Mary is rather simple. Mary was raised to Heaven, body and soul. That's the explanation and that's what it means and you're done.

People will be confused.  Mary went to Heaven like Jesus?

No. No, she didn't. Jesus ascended into Heaven. He used His own Power, lifted off and up He went, gone until the Second Coming (visionary sightings notwithstanding).  Mary was assumed into Heaven, not with her own power. She was raised into Heaven by the angels or Jesus or God the Father and Jesus or just God the Father or the Holy Spirit.  We don't know. No one was there to see it. 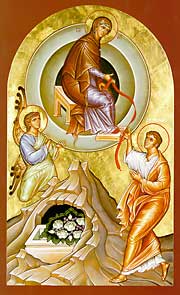 Or....St. Thomas saw it and as she went into Heaven she gave him her girdle which was not what we think of when we say "girdle", but her belt.  In the story, the belt is always referred to as a girdle.

"But wait," the thinkers among the group will ask, "if Mary didn't have Original Sin, why did she die? Death is the punishment for Original Sin." Let's hope at this point, there is still plenty left in the keg, because you are going to be here a while.

I think my friend makes an excellent point, but it's not dogma. That said, just about anything you read about the Assumption of Mary will begin with "after Mary's death". 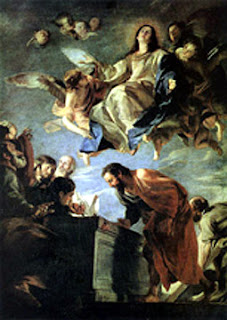 There are conflicting stories about the 'end' of Mary's life.  The stories agree that Mary lived to a ripe old age (the Franciscans say 84...or is it 86?  she was up there) and grew weak.  Sacred Tradition holds that the disciples gathered and gave her things to eat and drink, and with her loving family, the earliest Catholic Church, around her she.....I would have to say died, because these people placed her in a tomb and when they returned she was gone and they assumed she was taken to Heaven by being assumed there.

Then we have the more fanciful stories where, as she is being assumed, St. Thomas is there and he gets the girdle she drops to him. I love the idea that poor 'doubting Thomas' gets a nod as a very true believer.

The Assumption of Mary into Heaven was not officially made dogma in the Catholic Church until 1950, but is obviously a belief that has been held from day one.

Perhaps you shouldn't mention the chairs in Heaven unless you have a designated driver, since Heaven isn't a physical place, but there are two bodies and what's left of Elijah up there. There's a keg you don't want to open.
Posted by Sister Mary Martha at 12:04 PM

Douay-Rheims Bible
By faith Henoch was translated, that he should not see death; and he was not found, because God had translated him: for before his translation he had testimony that he pleased God.

I'm LDS, but the idea that Mary was assumed into heaven makes total sense to me. 1.) She was the best of all women. If anyone deserved it, she did. 2.) Jesus Christ can do anything he wants, especially this sort of thing.

What does Catholicism say about Enoch, though?

I love the way you explain these things with such a sense of humor, and I'm learning about the Catholic Church while I'm laughing.

Hmmm... and then there's the theological definition of "death" that you have to think about. If death is the separation of soul and body, then it wouldn't really make sense for Mary's soul to leave her body, go to Heaven, and then come back in a second to go back into her body so that she can get assumed, body and soul, into Heaven.

But who knows? I guess Jesus' soul left his body for a while, too... wait is that right??? Sister, did Jesus go into Sheol with his body with him, or was it just his soul down there?

Something I read which made a lot of sense. From the earliest days the people kept relics of everyone important. But no one has ever come forward claiming to have a relic of Mary.

Franciscans give Mary 72 years on earth. We say our 7 decade rosary and then tack on two extra Hail Marys at the end in honor of those 72 years. So, not quite as old as 86, but still very old for Bible times.

In Walsingham (and other shrines) they used to have vials of Mary's tears and milk. On special days they would liquify. I don't know what happened to those. Maybe Henry VIII got them.

As a former Protestant, the Assumption was difficult for me until I realized - of COURSE Jesus wanted his mother with him. My mother was my closest adult friend, and I miss her every day. He had the power to bring His mother home.

I was about to say 72 years for Our Lady, but Lynn beat me to it!

Hello from another secular Franciscan! MM

Hi SMM, Could you tell me why the candle is pink when the others are purple?