With Lent coming soon, I need something to post by my computer to remind me to "try to be good" to paraphrase the title of a Sanford Phippen book  from Maine.


I've been thinking about Lent, too.  It's just around the corner!  We have just about a week to get it together and figure out what we're going to give up. 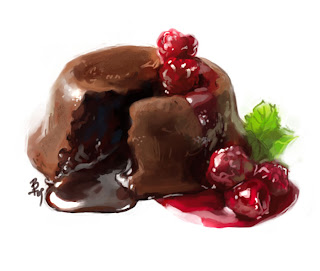 I'm really torn this year, as I would like to give up sweets.  It would be a huge sacrifice for me, as I have quite the sweet tooth, or, what's left of a sweet tooth after all that sugar.  If I don't want St. Apollonia as my new patron saint, I'll have to do something about my intake of corn syrup.


But... I don't believe in giving up something for Lent that you need to do anyhow.  Want to quit smoking and go on a diet?  Do it on your own time.  This season is about you and God, not about you and your waist size. At the end of Lent, you should be saying, "Wow, I have a much closer relationship with God now!"  Not, "Wow, look how great I look in these jeans!  Thank you, God!"


So, if I do give up sugar, I'll have to just do that and find something else to give up.  That will make it an extra difficult Lent.  Won't I be a joy to be around?  I'll have to be a joy to be around, anyhow.  It doesn't do any good to give something up and then go around acting like a bear being poked with a stick.  That's the whole trick to Lent.


So perhaps for your computer screen you should put on there, "Be joyful!"  This won't work unless you've done something that makes you suffer, though.  If you're one of the Kum By Yah Lenters,  you'll have to take another tactic. 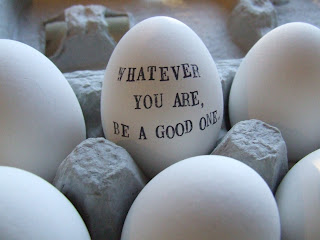 "Be Good" is a rather vague, if not impossible, statement.  Come on, Lent is all about digging deeper.  You're going to have to at least take a stab at determining what exactly would make you a better person.  Again, this isn't about your nail biting habit.  What's the one big change you could stand to make?


And then, what steps do you have to take to make that change?  Need to be more charitable? You don't have to become St. Francis of Assisi overnight. But you can examine how you can be more charitable each day.  Perhaps your computer screen could say, "Got Charity?"


Maybe you should make a list of things that could go on there and change them every few days or so:


Give Some Things Away


You get the idea.  You can tailor your list to your own shortcomings.  I'm sure our readers have some thoughts on the subject.


Again, I'm all for the old "give something up". Make it count.


Good Egg is from Paloma's Nest

Great post and jumping off points. I have never heard so many people talking about Lent in my life - I mean ordinary people I see all the time. I guess because it is so late this year we have all had time to come down off our Holiday High. The extra time to anticipate this upcoming season has been great - in our family we are actually feeling the need of it.
Love what you remind us about-to give up something--toward Jesus. Great post. THX.

Well, my version of him is 5'11", but really he's named after King David, not Saint David, anyway.

Oh, I was supposed to leave a comment....okay.

All those things are just like smoking and losing weight. I should be doing them, anyway.

Secondly, with all respect, my choice as to what I give up for lent should be just that, mine. It is between myself and my Lord. No offense, but this really isn't yours or anyone other person's decision, unless I specifically ask for advice on the matter.

However, since it was brought up...a person who gives up sweets, alcohol, drugs, tobacco, etc. for Lent, probably does not intend on giving it up permanently. It's not about waste size, or sobriety. They will more than likely pick it up when Lent is over. If they were serious about doing those things permanently, they would start any time of the year. In this context, then, the intent becomes about doing something difficult again, not accomplishing something permanent.

If your only qualification is that it be something difficult, that is getting in between you and the Lord, just maybe, giving up the Irish Whiskey for Lent, with the intent being coming closer to God, because it has come between you and God, passes the test. However, if the Irish Whiskey is so good that it gives you a religious experience, I'd think about picking something else. Odds are it's the former, not the latter, though.

I don't necessarily agree that you can't give up something that is inherently sinful for Lent, even though you should be giving it up anyway. Some sinful behaviors are very deeply ingrained, whether it be overeating, swearing, or lookint at porn. Of course, you should not be looking at it from the standpoint of, "I can go back to doing this at Easter," but if the Lenten season of penance gives you the context and motivation to get started on the tough work of breaking a sinful habit, I don't think there's anything wrong in making that your Lenten goal.

I generally drink a 1 liter bottle of diet coke a day. I am giving it up for lent. The way I see it, Christ was scorged, nailed on the cross, and died. The LEAST I can do is skip some soft drinks.

My guess for answer in feet would be 5. (St. Agnes of Bohemia is Saint of the Day on Mar. 2nd.)

In Lents past I have given up either chocolate or coke. I gave up neither of them for the purpose of losing weight. I am truly "addicted" to Coke (Coca-cola), so giving it up was truly difficult.

Chocolate is something I really love and very hard to resist. Giving up something that is such a treat to me makes sense--for me. My motivation has never been about dieting but about sacrifice.

Since I have been dieting for the last 5 weeks (lost 8 pounds so far), losing weight is not the motivator for giving up a treat like that. I think it is all in the intent. I have to think of a good sacrifice this year.