One of my companions is suffering from serious back problems. What patron should I pray with for him?
Is there anything worse?  I suppose there might be.  Keeping in mind that finding a patron saint for back pain involves finding a saint that had back problems, yes, boy and howdy, do we have a patron saint for you! And your friend.
St. Gemma Galgani was already holy and pious as a little child. She wanted nothing more than to head off and become a nun. The Visitation nuns were her ticket, she believed, because Gemma had a very special relationship to Jesus in His Passion and the Visitation nuns are the order that boasted (well, not boasted, nuns don't boast...we hope) St. Margaret Mary.  You may remember her. She had a vision of the Sacred Heart of Jesus that resulted in the entire Church embracing that devotion.
Now the story becomes truly fascinating, as saints, saints in waiting and saints in the making all form a daisy change of Heavenly help and intervention. 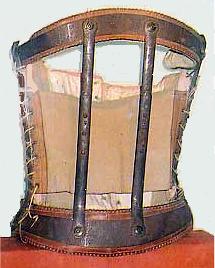 Here we have St. Gemma, now a young woman of 20 (1898),  living in poverty after the death of her parents, stricken with incurable meningitis of the spine and living with her Aunt. Gemma's back pain became so severe that she was bedridden and, before long, paralyzed, only able to move her head and arms and only able to move or change positions if someone did it for her. She had severe headaches, tumors all over her spine and her hair fell out.  Being a saint in the making, Gemma never complained and only smiled at those caring for her. In an effort to help her, doctors cauterized her spine in 12 places with no anesthetic. She never made a sound. She had to wear an iron back brace at all times. Now her back brace is a Second Class Relic. 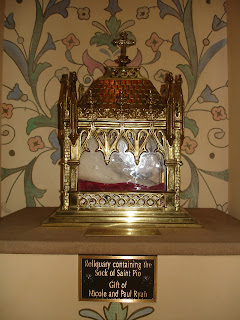 Like Padre Pio's sock.  Unless Padre Pio's sock has blood on it from his Stigmata wounds.  Then it would be a first class relice. But I digress.
Poor Gemma was torn. She wanted to die and go to Heaven and be with Jesus, but she didn't think she should pray to die. Her confessor asked her to make a novena to St. Margaret Mary and the Sacred Heart of Jesus for a cure.
St. Margaret Mary still needed her second miracle, the miracle that would hasten her canonization, so the Visitation nuns were excitedly waiting the outcome of the novena. Poor Gemma started her novena and then forgot about it.  Began again, forgot again and started again.
Sound familiar?  Considering the horrible condition that Gemma was is in, with nothing to do but lie in bed and pray or stare at the Cross (which is exactly what she had been doing) you'd think it wouldn't be too hard for her to remember she had started a novena.  Maybe now you won't feel so bad when you forget about your novena for your financial woes and your doctoral orals. 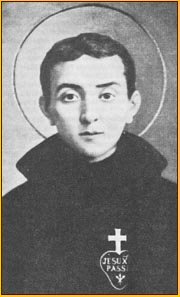 On day three of the non-novena, St. Gabriel Possenti appeared to Gemma and asked her if she wanted to be cured. Faced with a saint from Heaven, Gemma said yes. Gabriel said he'd come every day and help her pray her novena, which he did. Gabriel, a Passionist brother who died from tuberculosis  in 1862 was not a officially saint himself yet, although, obviously as he was dead and came from Heaven, he was a saint.  Beatified in 1908, he was canonized in 1920 (a delay caused by World War I). He was 24 years old at the time of his death.


The day after her novena ended, Gemma arose from her bed, fully cured. One would think that her life was all moonbeams and lollipops after that. She shot off to join the Visitation nuns. They were so tickled with her and her miraculous cure from her Sacred Heart Novena and the intervention of St. Margaret Mary, they treated her like royalty (unlike what happened to another visionary, St. Bernadette when she entered the convent).  They couldn't wait to get a Visitation habit on her and she couldn't wait to don one. To everyone's dismay, the Confessor for the convent would not accept her, claiming that her health was at issue.


In his defense, she had had meningitis (some thought spinal tuberculosis), and  he didn't want to have to press Heaven for a miracle cure package deal if the whole convent became infected.


Now Gemma was all at sixes and sevens as to what to do with her need to align herself with suffering of Jesus and leave the secular world behind.


And then one day, she was overwhelmed with sorrow for her sins and BAM, she ended up with the Stigmata.  She tried to hide it from everyone, but it really doesn't work to hide bleeding hands, feet and side or when you begin sweating blood because someone in the room (your brother) has blasphemed. She was vilified and mocked and accused of trying to get attention. Her stigmata appeared every Friday and lasted until the following Sunday. Even her confessor was slow to believe what was happening.


Like Gabriel, she died young of tuberculosis, after spectacular suffering from the disease. She was 25.  St. Margaret Mary died at age 24.  If they had lived at the same time in the same place, the three would have been pals, contemporaries.  Actually, they were anyhow.
Posted by Sister Mary Martha at 6:02 PM

The picture of St. Gemma's back brace is a real wake-up call for those of us who live in so much modern comfort. And I complain about wearing pantyhose!

Fewer diseases these days and advanced medical cures seem to have translated, perhaps into fewer saints?(Unless they are in Italy). An awful lot of them had physical ailments to overcome, didn't they!
Maybe we should be looking for saints in places like school tuckshops, and homes with five children under 10 at bathtime - saints in abundance there! Not to mention all the middle-aged daughters caring full time for frail parents AND busy teenagers at the same time. Or the young teenagers looking after mentally-ill mothers, which seems to be happening a lot more often for some reason.

Cometh the hour, cometh the saint.

Thank you for introducing me to her!

Lovely girl Gemma...The picture of her back brace makes me want to stop mentioning any aches and pains. Your presentation of Gemma's life is so much more readable and than others...thanks Sister!

She was a pretty lady. What I always have a hard time understanding about people like her, the living saints, is that they are "overcome with sorrow for their sins." Like she was before she got the stigmata. What sins? It's like Pope John Paul II going to confession every day, which I heard he did do.

Great post. The life of St. Gemma has always been so inspiring to my husband and I... we named our daughter after her. Lots of people think it's strange to name your child after a saint who suffered and died at a young age, but this was a woman of pure faith and heroic virtue... a worthy patron for sure!

I started the novena today. We'll see how many times I have to start over.

Dear Sister,
I love love love your blog=)I would like to know which Saint I should pray to for my father. He has spinal stinosis and to top it all off he has lost all the fat in the soles of his feet.He can hardly walk.His neck is fused, he has had bone removed from his lower spine and now his feet feel like he is walking on glass.But i must say he is a most amazing man.It is not very often you hear him complain.Thank you so very much.On a side note I want to say the Saint of the day is Saint Jerome only because that is my dad's name.

Saint Gemma and Saint Gabriel are two of my favorite people! It's not often that I hear other people talk about them, so it was great to find this post!

If this post has gotten anyone interested in learning more about St. Gemma, I highly suggest also reading up on St. Gabriel. They're good friends to each other and to me.

I am saying the Novena for my sister Lucy who was diagnosed with a degenerative back disorder that is paralyzing her.please pray for her St gemma

I pray for my brother and sister as well as my self..all under 40 with constant back pain..so glad i found this! God bless all children