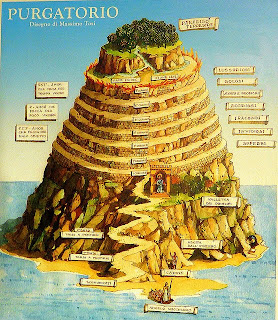 Everyone in Heaven is a saint. Does that mean everyone who goes to purgatory stays there till judgement day, or that they are all saints by the time they make it to Heaven? We pray for people in purgatory to make it to Heaven a little quicker so I presume they're not all necessarily there until judgement day, or are they?
Are you new to our little convent on the internet? Because this is one of those questions the old nuns would have answered with, "It's a Sacred Mystery."  That's Catholic Code for "Just let it go."
There actually is an answer to your question.  There is no actual time in Purgatory. Purgatory is outside of time.  It will end when time ends. So it's rather useless for us to sit around and count the days and hours a person is in Purgatory, although we do pray for them to get out sooner, rather than later and we hope our prayers are answered.

However, there are a number of saints who had souls from Purgatory visit them and talk about time. The conclusion: one hour of Purgatory feels like 60 years on earth. Time doesn't fly when you're not having fun.


I try not to think about it. Not Purgatory, since I am utterly certain I will be spending some time there, unless the world ends before I do, but the whole time factor.  For example, what does 60 years feel like exactly?  How many times have we older folks said, "What? That was last year?  I thought it was about ten years ago!"  Or, "What? that was ten years ago?  I thought it was last year!"  The idea that a soul could come back from Purgatory to tell about it and be able to pinpoint "60 years"....okay. 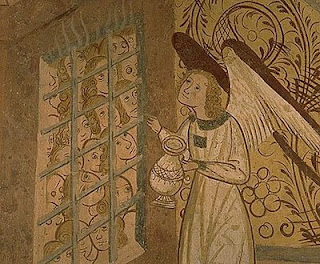 I see no point in talking about a place outside of time in terms of time.  What happens there will be between you and God (and Mary when she comes to give you a drink of water).


The one thing we do know for certain, is that people do not go there and stay there until Judgement Day.  Once you pay your dues and cleanse your soul completely, you're out and on your way.  We never say a person who is a saint went straight to Heaven (although they may have), even a canonized saint. That's not the criteria for sainthood or canonization.


The confusion seems to me to lie in the difference between a saint (anyone who is in Heaven) and a canonized saint (someone who the Church has declared is definitely in Heaven through proof of miracles).  Your dear Aunt Millie may indeed be a saint in Heaven. Let's hope so.  But we don't know that for sure, so she isn't canonized.


The only person I have ever heard of as being sentenced to Purgatory until Judgement Day was Pontius Pilate.  I was taught that by the old nuns in grade school.  But they made that up, poor things.  According to them, he went to Purgatory (as opposed to Hell) because he was sorry for his sin.


To which I would have to interject, "That sin."  He may have had a list the length of the
Amazon of other horrific sins for which he felt no remorse whatsoever and therefore went to Hell.  He certainly didn't believe Jesus was his Lord and Savior.


But I believed the "Pontius Pilate in Purgatory" story for quite some time.


The truth is the Church never says anyone is in Heaven, Hell or Purgatory for sure except for canonized saints.  We have a lot of thoughts on the matter of non matter.
Posted by Sister Mary Martha at 12:36 PM

Didn't Our Lady of Fatima reveal to Sr. Lucy in May 1917 that her friend Amaelia would be in Purgatory until the Judgement Day?

If one is inclined to believe and trust in Our Lady of Fatima (as I do)and her promises, then there is one soul we know of who will be in Purgatory until the end of time--the friend of the 3 children who spoke to Mary, whom they supposedly were praying for when she appeared. And, if I'm not mistaken, there was another little girl who, we are told by the Blessed Mother, is in Heaven. I'm not sure if the little girl has been declared a saint by Mother Church, but evidently she was declared such by the Mother of God. And the good news is that-eventually--even the girl who is in Purgatory until the end of time will become a saint!

If you go by Mary, St Theresa of Liseux's mother was comforted by a Mary who told her that one of her children was with her in heaven.

Also I thought the Bible makes it clear that Judas was very likely damned. Christ himself calls him "a devil".

A little girl in Purgatory until the end of time?? I doubt it.

Well, who knows for sure. If a little girl is in purgatory to the end of time, and she was an average little girl, then maybe not that many of us will even be making it to purgatory...

Unless "time" in purgatory feels different for everyone. Maybe she'll be there until Judgment day, but it will only seem like a week, while another person might experience it as almost a lifetime. You never know :3

You do not know whether Pontius Pilate believed Jesus is Lord. He may have come to believe by the power of the Cross and Ressurrection. You have no idea what he believed at the time of his death. He is no more culpable for the death of Jesus than you, I, and legions of others, individually and collectively.

Justice is done there. God can make a moment seem like a thousand years. Also good commentary on this and Catholic issues at http://www.catholicurrent.com/#/.

Please tell us the story of the little girl in Purgatory for all time....haven't heard that one!

Amelia wasn't a little girl. She was 17 or 18, if I'm not mistaken. The version of the story I heard (from a nun, so maybe she made it up) was that Amelia had gone to a dance and committed a serious sin of impurity, which she later confessed. She died before she had time to do enough penance, though. If the story is true (and I believe it is, but it is a matter of private revelation - therefore, one is not bound) it illustrates beautifully both the mercy of God and the justice of God. We deserve to lose heaven altogether when we commit serious sin, yet God chooses to forgive us if we but ask. No doubt, Amelia has inspired countless others to think twice before giving into temptation. Our Lady is probably bringing her many drinks of water! ;D