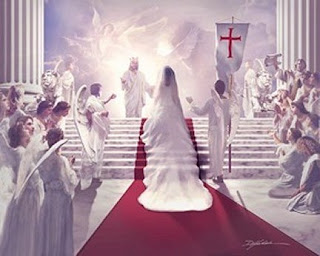 Sister, is there a patron saint for getting a boyfriend?

A saint?  Where have you been?

Let's start with St Agnes.  I'll give you a moment to peruse the material. Some people took exception with all the machinations involved in calling upon her.  They are the same people who refuse to bury St. Joseph in the front yard to sell their houses. To them I say the same thing you should say to the man that got away, "It's your loss."

I can understand how you may have missed this post way back in the archives. Perhaps while you were patiently waiting for me to answer, you read about St. Catherine of Alexandria and the increasing desperate prayers that may be said for her intercession as a Heavenly matchmaker. 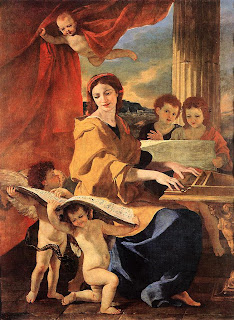 I would like to throw in St. Cecilia as a good pick. First of all, St. Cecilia, who is that patron saint of music and musicians, had absolutely not one thing to do with music or musicians. Her patronage of the melodically inclined comes from a line in a poem about her that mentions her singing in Heaven. Or playing the organ?  I'll have to look that up.  In any case, she is often depicted in art, in particularly on holy cards, seated at the organ with the angels as a chorus.

The reason I think she would be a good pick is twofold. Virgin martyrs are on the short list for saints to whom we pray for mates and St. Cecila was a virgin martyr.  But St. Cecilia, virgin that she was, had a boyfriend!  Many of the virgin martyrs ended up being martyrs because they had spurned some potential boyfriend who then had the poor girl arrested out of spite.  Things went south from there, as in the case of St. Lucy.  St. Cecilia, on the other hand, had a lovely young man to whom she was engaged. When she told him she wanted to become a Christian and remain chaste, even if they were married, he said, "Fine with me."

Now that is some excellent boyfriend material.  You and St. Cecilia!  A match made in Heaven!
Posted by Sister Mary Martha at 12:35 PM

I think St. Joseph would be a good patron for finding a good husband - he had to be the very best husband ever!

St. James is the saint of the day, but I don't know how to give the answer in feet!

St. Cecelia is my patron. She reportedly sang hymns on her deathbed, which seems to be the only reporting of any association with music. I love her story, and it touched me in so many ways. I think I read about it in great detail somewhere online... maybe in a Google book?

I wonder how souls that St Cecillia husband got out of purgatory with that one?

In Brazil, they ask Santo Antonio (St. Anthony) for help with finding a mate. His feast day is the day for lots of parties that just might be called "mixers," with plenty of elibible singles on the guest list.

An acquaintance of mine tells me that she was encouraged by the nuns at school to pray to St Joseph for a good husband. As this lady has led a very happy single life I am not sure that I can recommend it, although St Joseph might argue that he had protected her from marrying a bad one.

7/26 is the feast of Saints Anne and Joachim, the parents of Mary. Prior to a long and rather tedious novena to her the only prayer I ever heard addressed to her was "Good Saint Anne, send me a man." Mind you, I heard it from a great-aunt who died a virgin at age 99.