I hope I don't disappear on you again, but school actually starts at the end of the week. I'm hoping to power through questions and comments, so let me know if I accidentally skipped you. Some one wrote in the comments section "Andrew of Scot---where do I leave a question?"  I don't know if they meant to try and ask a question about St. Andrew the Scot or they were using his name in a sort of "Jumpin' Jehosaphat!" sort of way.  In any case, the comments section is the place to leave questions.

Meanwhile a comment from a reader about the "Superheroes".

Ahhh - but there is the anomaly of not letting one's Right hand know what the Left hand is doing.....drawing attention to one's good deeds by Dressing Up somehow diminishes the effect.
In my opinion.


While I can see your point, I can't really agree. Perhaps if I hadn't had to listen to so many comments about what nuns wear or do not wear over the years.... 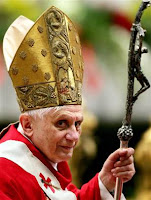 The whole habit /clergywear argument goes something like this:
"Nuns and priests should always be identifiable, like policeman and ....well, policemen."

Now, I can understand that sentiment.  So the same thing can be said of these do-gooders.  Their outlandish outfits identify them as people who are there to help. Like  policemen.  Or  nuns. The whole reason the Pope wears that tall hat is so that you can pick him out of a crowd.

My beef with the need of some folks to see habits and collars is that it seems like when they say they want to be able to spot the avowed spouses of the Church,  what they mean is that they don't want to be caught misbehaving, or swearing or being unkind and gossipy because they didn't realize the guy they were having a cocktail with was a priest or the lady they cut in front of to steal a parking space was a nun.

To them I say, "Behave yourself!"  That way you won't have a problem no matter what anyone around you is wearing.  This includes the beach. 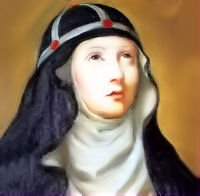 Is St. Catherine of Siena or St. Catherine of Sweden the patroness of preventing miscarriages? and why? I've seen both, and while it's possible they both are, the names make me think someone mixed it up somewhere.

No, it is both of them, but I don't know why St. Catherine of Sweden wound up in that category. I've actually been on the case trying to find out and I've come up empty.  That means the reason may well be that a prevention of a miscarriage has been attributed to each her, ala St. Gerard.

St. Gerard is the patron saint of childbirth because he forgot his hanky.  He left it at someone's house and then, later, while a young woman was having a very difficult and dangerous labor, somebody in the house remembered Gerard's hanky was there and gave it to the young woman to hold.  Mother and baby did fine, as they say. 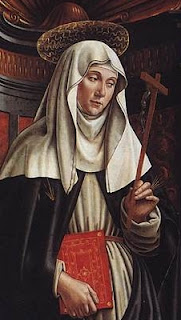 So, I'm thinking something along those lines must have gone of with Swedish Catherine.  Unless perhaps her own birth was difficult.  She was the middle child of eight, the daughter of St. Bridget of Sweden. Which brings us to Siena. Her patronage against miscarriage is a no-brainer.


St. Catherine of Siena's mother had had 22 children (half of them had died) when she gave birth to twins in while in her forties. Catherine's twin didn't live long, but Catherine became one of only three women "Doctors of the Church".
Posted by Sister Mary Martha at 12:04 PM

My comment - maybe I mis-read the post about Superheroes, I understood it to be referring to the fact that these people donned fancy dress costumes in order to do their Good Deeds.
That's what i thought was ostentatious and unnecessary.
But if I miscontrued, apologies!

Perhaps the person who said St. Androew of Scot was trying to give the saint of the day. Who today is St. Raymond Nonnatus, BTW. Don't know about the feet.