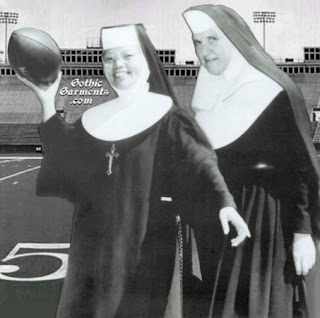 I was in a discussion recently with a Protestant friend who insists that the Catholic Church is just as fractured as the Protestant groups. I was sort of taken aback and had to dig deep to figure out what he was saying since the only real "fracture" I could think of was the Great Schism. Apparently he was referring to the differences in the Catholic orders, like the Franciscans, the Dominicans, the Jesuits, and so on. He has been taught that the different orders are like the fractured Protestant faiths, the Methodists, the Lutherans, the Baptists, and so on. How can I explain the difference to him? How can I show him that the Jesuits are just as Catholic as the Benedictines, that they have a different name but they're all part of the same team? Do you have a good analogy? I don't know what to say to him. Thank you for your help!

Well the poor thing.  There really is no end of misinformation available for the separated brethren.

Although, the Great Schism isn't the only "fracture" in our illustrious Church history.  Anti Popes spring to mind.  At one point in time, we had two Popes, one in Italy and one in France.  Since neither of them would step down, a third Pope stepped up and then he wouldn't leave either.  Don't worry, it all worked out.  As you can tell, there is only one Pope now. 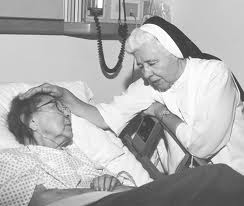 Some orders teach, some spend all their time praying for you, some nurse.  They all play for that one team and they all play the same game, but their job in that game differs.

I would call myself a running back. My job is to get the ball further down the field and, if possible, score a goal.  What is the goal? Getting my soul and yours to Heaven.

The people who populate different orders within the Catholic Church have one thing in common, they believe every single thing the Catholic Church teaches.  The Catholic Church will not give its blessing to groups who believe otherwise.  If a group believes something different, they will not be allowed to be an order.  And if the group somehow comes to some wacky conclusions after they have formed and been approved, they get the boot, orderwise.  It's really not possible to have an order that is not fully in harmony with the teachings of the Catholic Church.  If they are, they are no longer a Catholic order.

I hope this helps.  I don't watch football.
Posted by Sister Mary Martha at 2:04 PM

I've seen a similar argument against Catholic apologists. We (rightly) claim that the Catholic Church is not divided the way Protestantism is. There are over 30,000 different Protestant denominations, and 1 Catholic Church. The (silly) counter-argument is that all the Protestant churches basically boil down to only 5 or 6 divisions (Episcopalians/Anglicans, Presbyterians, Lutherans, Methodists, and Anabaptists is one possible breakdown), and the supposed unity of the Catholic Church is no such thing because we've got the women's ordination crowd, the anti-women's ordination crowd, the gay marriage crowd, the traditional marriage crowd, sedevecantists, etc.

It's a dumb argument, but sadly, it gets traction among anti-Catholics.

So now I'm really confused. If Jesuit's, Dominican's and Franciscan's all have the same basic believes of the Catholic Church, which is basically to lead us to a closer union with Jesus Christ. What is the difference of being Presbeterian, Lutheran, Methodist, or Catholic, in leading us to a closer union to Jesus Christ? Oh, I forgot about the Pope.

I have a question for you, Sister Mary Martha. How does regular water become holy water?

Muffy,
so far as I understand it (I'm a Catholic convert who denomination-hopped among a half dozen Protestant denoms growing up), all those different Protestant Christian groups (Presbyterians, Congregationalists, Evangelicals) all have a few key things in common (ie, believe in the Trinity, in Jesus' divinity & humanity, Christ's sacrifice for our salvation on the Cross, and the resurrection, etc) that all Christians hold, but have many, many, many other beliefs that differ.

For example, growing up Presbyterian, I was taught sola scriptura (bible alone), a doctrine that originates with Martin Luther (the idea that only the Bible has infallible teachings and it alone is enough for salvation). That's in huge conflict with what Catholics believe (also, just for what it's worth, sola scriptura isn't actually a biblically based doctrine. Ironic, eh?)

For example, my parents' denomination believes in infant baptism. When I was Evangelical, they don't believe baptism has any actual power- it's just a symbol you can do when you're old enough to "accept Christ" so they don't baptize babies. Pentecostals baptize in the name of Jesus, and other groups baptize in the name of the Trinity (like Jesus asked us too at the end of the Gospel of Matthew)

It's less obvious today, when most mainline Protestants seem to all believe generally the same basic stuff and teach the same basic stuff. (ie focusing on the things all Christians have in common but not making clear why a Methodist is different than a Congregationalist) But if you read their denominational statements of belief, they are very, very different. Even as recently as a few decades ago, denominational differences were a BIG deal. (a few denoms are exceptions, like the WELS Lutherans and the Southern Baptists, in that they are rather blunt about the things they believe that differ than other groups- for example, the WELS believe the Pope is the antichrist, which most mainline groups aren't willing to get on board with... etc).

The Franciscans, Jesuits, Dominicans, Benedictines, Carmelites, etc... that is a different issue all together. Like Sister's analogy of the football team, they all play for the same side (the Catholic Church , therefore Jesus) but have different roles. You can also think of it as different forms of spirituality/connecting to God, but all focused around the unity of the Catholic Church. For example, I have a "Dominican style spirituality." Like St Dominic and other famous Dominicans (St Thomas Aquinas, etc) I love to study and learn about God and can get on board with the Dominican charism "study as prayer." Many Dominican sisters are teachers (though not all).

Francisican spirituality is very focused on service to the poor and the suffering Christ on the cross. Even laity (non-consecrated people who aren't nuns, priests, or monks) can be Franciscan or Carmelites or whatever, just they don't take vows or wear habits/etc.

But the key thing to remember is:
All the different spirituality/religious orders are Catholic (universal) meaning they are rooted and connected to the Catholic Church, whose teachings are guided by the holy spirit and connect directly back to Jesus via apostolic succession. Someone might choose to be a Franciscan nun rather than a Dominican nun because she prefers serving God by helping in a soup kitchen, but the Franciscan who does that is no more or less Catholic (and no more or less accepting of all the Church's teachings) than a Dominican sister who teaches school or a cloistered Carmelite nun who prays for 10 hours per day or a Benedictine monk who works in the fields. Etc.

@Maggie - that was a pretty good answer for a convert! I will give you an A- because you have the basic "jist" of it. I just want to add that in addition to nuns, priests, and monks,there are also sisters and brothers. These two groups tend to get overlooked - brothers, because there are so few of them, and sisters, because most people call us nuns. Nuns are sisters and sisters are sisters, but sisters aren't nuns. You may have known a sister that taught school, but not a nun - because the nun would have stayed in her cloister (nuns, with the exception of externs, don't get out much. They are under what is called 'Papal enclosure.') It's confusing, sometimes even to sisters and nuns, because it used to be that nuns wore the official habit of the order, while sisters wore something closer to what the people of the day wore - except that they all wore the same one. It would be like you wanting to start a women's group to serve meals at funerals (that would be your "charism" or "gift" to the church.) Suppose there was a nifty looking skirt and blazer combo at the local Ross, available in every size, so you decided that would be your uniform. To distinguish yourselves from everyone else wearing the same garb, you add a large crucifix or medalion and a simple veil. The problem is that there are lots of orders of nuns who want to dress like sisters - or just like everyone else, instead of in the traditional garb of their order. There are about as many sisters that want to dress like nuns, and wear these antiquated get-ups that they have no business wearing. Now the lay people REALLY can't tell us apart! We also take the same vows (Poverty, Chastity, and Obedience) but ours are simple (i.e. you can be dispensed and leaver your order) but in the case of nuns, the vows are solemn (i.e., irrevokable. A nun, even if she leaves her convent, is NEVER free to marry.) Also, the term "ex nun" does not mean "former nun." It simply means "exclaustrated nun." In other words, a nun who is no longer living in her cloister, either by her choice, or at the decision of her community.

@Maggie - also, the Carmelites, holy though they be, are not praying 10 hours a day. There is no order approved by the church that devotes that much time to prayer. It would be a rare soul called to that intense of a prayer life. The norm is between 3.5 and 5 hours a day for all of us, with the active orders at the shorter end (adding it to the regular 8 hour work day) and the contemplative orders at the longer end. They still put in 4-6 hours of work each day. No one spends their entire day in prayer - there is much work to be done, both inside and outside the monastery!