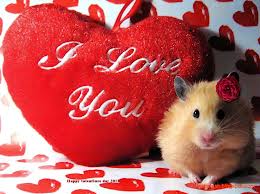 Actually what he said was, "the old crones would say 'Happy SAINT Valentine's Day'". But I knew to whom he was referring.

And while all of that is lovely, it has rather turned into a day that makes a lot of people sad, or disappointed, while a lot of other people are wallowing in their true love and chocolate.

We complain all the time about the "War on Christmas" (which starts, if WalMart and Target are any indication, the day after Halloween).  All we really mean by that is that Christmas has become too secular, that the birth of Jesus seems to be in the background, somewhere behind the inflatable Santa and the new flat screen TV.

But the same thing has happened to poor St. Valentine. He is lost under the pile of revealing lingerie, 4 foot teddy bears, boxes of chocolate, roses and massage gift certificates. No matter which St. Valentine we pick, we are actually looking at a man who helped people in need, bringing food and comfort to those in prison, for example.

I think we should take back St. Valentine's day, stop eating cake (it IS Lent, after all), and find something worthwhile to do in the name of love.  A random act of kindness, a donation to a charity, a helping hand, a voice of comfort. No one will be disappointed.

Happy Feast of Sts. Cyril and Methodius! We celebrate the traditional way: eating cereal and making up new alphabets! ;)

Hi Sister MM! Yes I realised that there were several St Valentines and none of these possible patrons deserve to be celebrated with a variety of pink fluffy bunnies, tacky lollipops and even tackier "St Valentine" undies! The random act of kindness idea is spot on.
@Wendy: lovely family imagery there!

Just wanted to say thanks for your blog! It is the only blog I can't stop reading. God has blessed you with a unique view of life, terrific communication skills, and a sharp wit. cmc

Happy Saint Valentine's Day- from an epileptic at that. I was just doing research on that, along with other research.

I've posted before--- got very busy, but enjoy your humor as I go along. Please say a few prayers for me- I've also called in the Valentines, Jude and Lawrence, along with my own prayers. I figure that if they all work together, I should be a desperate case all right, but with courage, grace and humor under fire! Am in the middle of a neurologist search, have however gotten answers on my epilepsy, and am trying to stay clear as I sometimes have issues communicating because of it- to find one that will help me and not over-medicate, and will treat me as human, rather than overmedicating (the medicines don't work for me, another doctor recommended surgery) and making me sicker. Through it all, I have God, I have the saints, and I have a hilarious nun to read, along with, above all else, God and my faith. Bless, and may you feel loved, Sister MM.

My Spanish teacher emphasized the saint in much the same way when someone asked her how to say Happy Valentine's Day in Spanish. She replied, "Feliz dia de SAN Valentin."

Hi Sister - in the spirit of St. Valentine's Day, I have a question about a saint for married men. Of course, St. Joseph immediately sprang to mind, but he seemed happily married! I wonder if there is a saint you could recommend for the following: My sisters and I would like to pray a novena to ask for protection for our father from his second wife. She is nominally a Catholic, but treats him in an unChristian way. He is in his 70s, and in good health, but she is 10 years younger and always calling him old man and talking about assisted living and how the old should not be taking care of the old. We fear for him. He can come live with any of us any time he wants, but as a truly devoted Catholic man (who had a very good marriage with our mother before she passed away), he holds marriage in high esteem and I cannot imagine him ever leaving. (There is much more to the story, but I am leaving the really ugly bits about the second wife out, in case she finds this blog & recognizes herself, as she would then take out her anger on him.)

Please help - maybe there is a married saint who somehow converted his horrid wife to greater kindness?