We have to take a break from the raging discussion in the comments section on my comments on evangelizing Mormons (and Mormons evangelizing) to wipe our tears of joy from our exciting day yesterday. 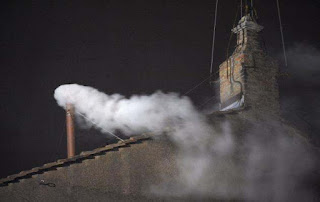 Welcome to our new Pope, Pope Francis I.  We happened to have the tube on when the chimney suddenly started pouring out white smoke. A handsome Italian correspondent had been blabbing to some lady on the news about how everyone was standing in the rain and what time it was in Rome, when there it was.  It was so very exciting to be a part of that moment and then wait holding our breath to see who had been chosen.

Do nuns always cry when a new Pope is elected? Not always. I didn't cry when Pope Benedict was elected. I figured he was a shoe in.  I wished I had had a bet in Vegas on that one.

But this was so thrilling and unexpected.

It was his name that did me in. Francis.  That is a message to the world.

We've talked about St. Francis of Assisi many times here in the cyber convent. He is everyone's favorite saint for his beautiful and thorough humility and love, his poetry and compassion.  He was the most faithful follower of Christ's teachings that I can bring to mind, and his simple philosophy caused the numbers in his order and other orders of priests and monks and nuns to balloon in his own lifetime.

I know there are some who think he choose Francis after St. Francis Xavier, who was also a Jesuit like the new Pope. But those in the know in the Vatican (if we are to believe the handsome Italian correspondent) say the new Pope was thinking of St. Francis of Assisi.

Of course, St. Francis Xavier was no slouch. He was one of the founders of the Jesuit order and he traveled to India, Japan and Borneo.  He converted more people around the globe than St. Paul and he was sharp as a tack, learning that languages of the people he sought to convert and changing his tactics to get their attention when whatever he was doing wasn't working. 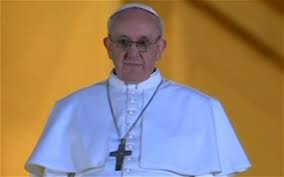 Our new Pope has such big shoes to fill.  When he first stepped onto the balcony, I was struck by how burdened he looked. So did the other people out there with him, shuffling around with the microphones and banners and flags.  Pope Francis' first remarks were comforting.  His job is overwhelming.

The world is overwhelming.

It's still Lent. A today, we know exactly where to offer our suffering.
Posted by Sister Mary Martha at 2:00 PM

Same thing happened to me! I was excited when I heard we had a new Pope, but the second I saw the name Francis, the tears started.

Very fitting for the new Vicar of Christ:)

The Holy spirit was truly working when we were given Pope Francis as our Holy Father.

Off the topic but hopefully perhaps the next topic: Sister Mary what is your favourite book or part of the bible?

I was counting up the Popes in my lifetime the other day - Pope Francis is the 7th! As a child I vividly remember meeting Pope Pius in Rome in company with no more than 10 other people - and I have always thought of him as "my" Pope!

Same here! I was watching the chimney cam when the smoke came billowing out,Yay!
Thankful prayers, watching the pomp and circumstance,the crowds swelling in square,all us around the world waiting,waiting.

The announcement of Pope Francis and to see this humble man who is beautiful simplicity step out tentatively,I had tears of joy and prayers pouring out! Friends and family were the same way,many tears of happiness between calls,texting and emailing,we are so happy for the gift of Pope Francis.

My mom(Greek Orthodox) likes this pope, because he reminds her a lot of her old priest from childhood. She told me a memory of when she was a teen, and was talking with a bunch of other teens about a certain bishop they thought was "cool". The priest that looks like the Pope then told them, "It is not for us to judge if the bishop is hot or cool." He was ESL and didn't realize the other meaning for "hot", lol.

Even my Mormon mother is excited about the new Pope! I am praying extra hard for him, because it must be hard to have that much humility and be thrust into the midst of such responsibility. I read that yesterday he just came out and greeted the throngs of faithful without any warning. I pray that he keeps safe from those who would harm him physically and spiritually, and that he continues to magnify Christ's love for even the "least" of us.

Sister, my brother has a a heartbreaking problem with his son who is 11 and losing his faith. My brother has divorced and remarried (there was an annulment), and now this kid spends half his time with his mother (who has since divorced & remarried twice), and the other half in my brother's new home. Very ugly circumstances--the "natural" mother has had little interest in raising her son, though she wants "her share" of custody.
He is in counseling, Catholic school, attends Mass and the sacraments, and in my brother's house practices the faith devoutly. But he is sinking under. Is there a saint whose intercession we could beg? Anything we could give him to read? How can we help this poor kid?