There's a APP For That

Long long ago, here on our little cyber convent, I posted a series of patron saint poems. Most of us are familiar with "Holy Tony, come on down, something's lost and must be found", used to invoke the intercession of St. Anthony when your glasses are right there on your head. That happened to me just this morning. My hand found them before St. Anthony did.

When we posted the prayer to St. Anthony, we got quite a few more poems in, including St. Boniface, who has nothing to do with cars, but who's name does rhyme with "parking space", and St. Ann, the husband finder. It prompted us to write a couple of our own.

And of course we do patron saint matching, some cases updating the patronages of saints, since the whole point of finding a patron saint for anything is that the saint would be sympathetic to the cause, because said saint had to suffer in a similar way as you. We dubbed St. Thomas More, for example, the patron saint of what we now call "blended families".  You know, like the Brady Bunch, when someone with children remarries someone who also has children from a prior marriage. That happened to St. Thomas More, and he was a great blended dad to his new family.

So it is with surprise and delight that some enterprising person named Craig took the ball and ran with it. He has made a patron saint PHONE APP. He claims to have been inspired by our endeavors here on the blog and over at the shop.

I can't have it. It's only available for IPhones. 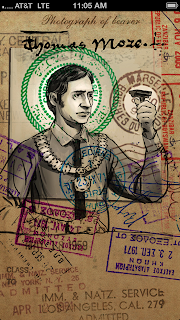 As you can guess, I do not have an IPhone.

Craig offered me a free app and he has five more free apps for you! First come first serve.

I gave mine to a person with an IPhone, who was nice enough to show me what Craig has been up to, which includes original saint artwork, the story of the saint, and a saint poem prayer for each saint.

His take on St. Thomas More, because St. Thomas is the patron saint of 'civil servants" and the person who invented the word "Utopia", depicts St. Thomas as a postal worker and the prayer is a prayer for patience while waiting in line at the post office.  So you don't go postal, so to speak.

And here is a link to the APP shop:
appstore.com/saintify

Craig would like you to know that he'd love your feedback and suggestions for saints.  Craig, St. Francis!  My IPhone friend tells me you missed a big one!

Your comment about not having an iphone made me chuckle. But it also made me wonder, will we get to a point in which it's ok for religious to own smart phones? Presumably you or your order own a computer, and even if you access at the library there are definitely orders and individual nuns who own computers. Surely at one point that would have seemed entirely inappropriate when computers were not so ubiquitous. I think smart phones are approaching that level of ubiquitousness!

We hope you all enjoy the app. We worked very hard to create quality, original content and look forward to hearing from you.

Each link is good for one download. If you click on a link and it says that it has been used, keep trying the following links. If you click on the link from your iDevice, it will download automatically from the App Store.

Agreed as to St Francis.

Sigh I don't have an iPhone, either. I really like the saint card, it reminds me of A.T.C's (artists trading cards) I used to make and swap with other artists - Nancy

The codes have all been used. :(

What about android believers? Is there an app for us?

We want to create an Android app, unfortunately, we had to put that on hold for now. Creating an Android app would require rebuilding Saintify from the ground up, technically. I paid for everything, the artwork, development, etc. out of my pocket. In the end, we had to select one platform for the app, and chose to focus on iOS.

Thank you for your understanding. I'm hoping that the app does well enough that we're able to build upon what we've created so far.

Thanks everyone for your support.

I was just wondering if there was a prayer or specific saint one can pray to in regards to school, work and just general self-doubt? I am currently struggling to get to medical school. I gave up everything to pursue this because I believe this is my calling. However, I am struggling and having doubts I can even survive. Is there a patron saint for this?

CM, the vocations director at a monastery near me has an iPhone.

C'mon, people. It's only 99 cents. Unfortunately, I don't have a wireless connection right now so I can't send feedback to Craig on my iPod...so Craig, if you see this, may I suggest St Maximillian Kolbe? Oh, and thanks for St Drogos. My morning coffee katch enjoyed it immensely.

Mahdji: Glad you enjoyed the app. Please spread the word, we'll be lucky if we make back our out of pocket expenses. Even if we don't we're glad to have made something that people hopefully find inspiring and humorous, of which we seem to get to little these days.

The artist really did do inspired work for us.