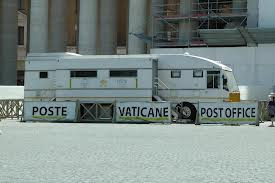 Dear SMM- Do you have any idea if the Vatican Office for Sin and Forgiveness (OK, the Sacred Apostolic Penitentiary) has its own letterhead or business cards? Just wondering. Slightly more seriously, is there a listing of the different offices of the Vatican anywhere on the Web? It would be interesting to see. Thank you for all the information you give us Sister.

I wonder if they have MOO cards.  These are the new rage.  You can have dozens of pictures in your box of cards.  They could have their own picture, the papal seal, a lovely shot of the Vatican, their favorite saint, a picture of them kissing the Pope's ring, what they had for dinner....the possibilities are endless.

In any case, it's easy to write to the Vatican and if you get a response, you'll have your collector's item. I'm not sure how you wangle a business card.  Since it's my job to make your connection to the Catholic Church easier and not more difficult, here is a list of all of the Offices of the Vatican.

So to write to anyone, or any office you can use this address:
Name of the Cardinal or Archbishop or Bishop or Priest in charge
Name of the Office
Piazza Pio XII 1000193 Rome, VATICAN CITY

And as long as you're at it, you might want to suggest Moo cards to them as the new rage, since the Pope is tweeting indulgences and whatnot.
Posted by Sister Mary Martha at 1:34 PM

you could also look here for info on the different offices
http://www.vatican.va/roman_curia/index.htm

Sister, I've discovered many new religious orders are springing up in the Church. It's so wonderful! I'm curious though, how is a religious order started?

Somewhere I have my grandmother's letter from Pope Pius XII. Although it may actually be from one of his aides. She did fancy drawn work and made him an amice. The priests do not use an amice any more as part of the vestments, but at that time she made one for every new priest she know when they were ordained as well as bishops she knew being consecrated. I don't know how my grandmother knew so many new priests and bishops.

Today I got back together with my boyfriend after a very brief split. We have and will continue to try to lead a Christ-centered relationship. He confessed to me that while we were apart he lost his virginity to another woman. He's very upset. What advice can I give him and what saint can I ask to intercede for him?

So, with the recent statements of the pope about homosexuality... I'm confused. He's careful to describe it as "disordered" but I don't think I know what that word means. What's the difference between "disordered" and "sinful?" What other things are disordered?

Whitney,
the logic goes that only sexual relations (that are open to giving new life) within the loving sacrament of marriage are "ordered". Anything outside of that, ie: sex using birth control and sex outside of marriage (that would mean homosexual acts too) are "disordered".
The use of the term seems offensive, (and it may be) but it comes from the belief that the natural, God given "order" of things is fulfilled through marriage and children.

Dear L., maybe St. Augustine- the rebel of the saintly pantheon. His early life had a few stumbles before grace was found.