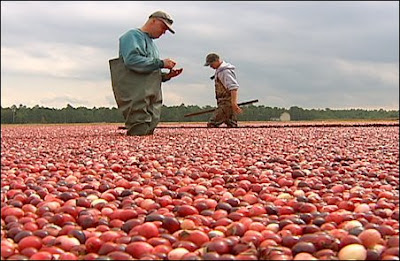 I am busier than a cranberry merchant. That's another phrase my mother uses. I say it all the time and people look at me like I have two heads. Someone actually asked what in the world I meant by that. I suppose that since the cranberries that person buys come already neatly bagged with a pretty blue wave on them, the image of someone trying to wrangle cranberries and sell them escaped her.

Don't think that doesn't happen. It happens a lot. I know everyone thinks that nuns are taught obedience and therefore just offer it up when living in close quarters with groups of women gets to be a bit much. That happens a lot, too. But sometimes, some people are moved, or asked to move, or asked to leave altogether because no one can get along with them. It happens. I'm not sure it's the case with Sister Nicholas. One could certainly make the case.

I don't mind her. But then, I always knew she was temporary, so perhaps I could always see the light at the end of the tunnel.

Sometimes when you see the light at the end of the tunnel, they build a new tunnel.

I've always found it quietly amusing, when people ask about vocations or wonder if they have a vocation, and they are wondering aloud with which order they should join, just what makes them think the order will have them? People are turned away in droves.

Well...not droves. Not these days. But only because droves don't show up in the first place. Ironically, you are more likely to get turned away these days than in the past.

Could you let me know who the patron saint is of Catholics whose faith is challenged and insulted constantly? I am a conservative Catholic who lives in the very secular San Francisco Bay area.

Thanks in advance, and God Bless you.

I have to go with the North American martyrs on this one. You may have heard of 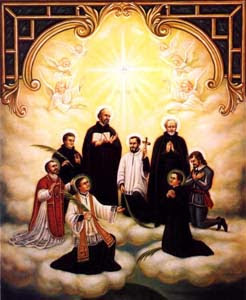 them. These were eight Jesuits who left France during the Renaissance and came to Canada. They had a plan to evangelize the 'savages', meaning, the Native Americans of Canada. They picked the Hurons to start in on, because the Algonquins were a nomadic tribe and the priests apparently thought it would be impossible to just follow them around everywhere trying to get them to listen about Jesus.

The Hurons stayed put. There were about thirty thousand of them to work on. So the priests went to work. It didn't go very well. During the thirteen years they toiled they did manage to baptize a number of people, but it was an uphill climb.

That has to ring a bell for you.

Things went from bad to worse when influenza and small pox wiped hundreds of people out. Although the priests did catch the disease, they all survived. Rather than take this as a sign that God was indeed helping them, the 'savages' became suspicious that perhaps all that Latin mumbo jumbo was some kind of "Blackrobe" sorcery.

Meanwhile, the Hurons were at war with the Iroquois. It was the Iroquois that eventually tortured and killed the eight priests.

Thoroughly gruesome, by the way. I'll let you look it up for yourself on the Google. Chewing off fingers, removing eyeballs from their sockets with hot pokers, hunking off chunks of flesh, running club gauntlets...the list goes on. The Pope had to give Father Isaac Jogues a special dispensation to say Mass with what was left of his hands. A couple of the lucky ones got shot with muskets and arrows in the head.

That should make you feel better about your life in San Francisco.
Posted by Sister Mary Martha at 7:04 PM

I read somewhere (not sure if it's true or not) that the English had told the Iroqouis that the Blackrobes were sorcerers, and that they needed their thumb and pointer finger to "work their magic" (i.e. celebrate the Mass). They chewed off the fingers of Fr. Jogues because of this.

and after 'hunking off chunks of flesh' the indians would eat it. Eeeew.

I live between two reservations and it is now 'politically incorrect' to mention the atrocities performed by the American Indian, tho I grew up a stone's throw from the Wiseman massacre sight. You can google it but the printed version has been watered down.

Hey Monica, It was no differant to them than a tasty bar-b-que is to us.

I live in Southern Ontario - where this whole thing took place. The little Huron camp where the Jesuits lived is (mostly) still standing, and has been turned into a lovely educational pavillion called Ste. Marie among the Hurons. I went there for a school trip once....along with every other kid in Ontario. Right across the street is Martyrs Shrine - a beautiful church dedicated to the North American Martyrs.

I lived in San Francisco for my 20's, before I became religious. I think being a conservative Catholic in SF would be very, very hard.

History is history. Being a jerk is being a jerk. Unkind is unkind - to use history to attack another race or gender of people is wrong. To use history to keep a person or persons in any sort of bondage (financial, or otherwise) is wrong. See where I'm going here?

Mema, I have never barbecued and eaten anything that was still alive, have you?

Journey of truth- I too believe history is facts. But where I live it is considered poor taste to discuss the wrongs of the minority - the American Indian, in this case. I don't know why. They are making changes to the history books that detail the Minnesota massacres too, making the crimes less brutal on paper.
My daughter was taught evolution in history class. She wrote her teacher a paper clearly telling him that theory was for science and to keep to the facts for history class.
Monica- there is the annual testicle festival in Lincoln NE.
Beef and pork testicles are considered a delicacy, it is one food that can be eaten with out killing the animal first.
God Bless, Cindy

As a high school history teacher (turned stay at home mom) I never watered down the atrocities of any group of people. Not even the Catholic Church. If we do not learn from history we are condemned to repeat it. If we do not face sin and shed light an it as sin, not just 'politically incorrect' or 'wrong' behavior we will not overcome it. And if anyone thinks that the acts committed by people a hundred years ago have nothing to do with what happens today, look at the Crucifixion. Our history shapes who we are as individuals and as groups, whether that group is a minority or not! I am also an orthodox Catholic (ortho-straight or correct) living in the S.F. Bay area. I think it is difficult to be so almost anywhere these days.

SSM, would it be "politically incorrect" for me to ask why people are turned down by orders when they'd like to become sisters or nuns? I wonder if you could shed some light on this. I have wondered whether I should become a sister.

Our order turns down applicants who are mentally unstable or unsuitable to live in community life (for one reason or another). Women who claim to have had visions or inner locutions also send up a red flag. If someone truly has had visions or inner locutions, then it will be the bishop bringing her to the convent.
Just my two cents.
-Sister Anonymous