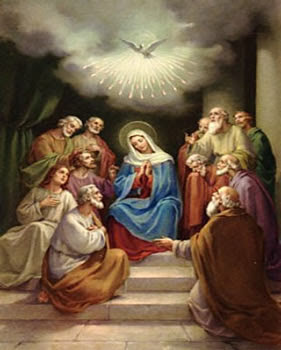 I am almost always a dollar short.

I apologize for being a day late and a dollar short in answering this question that was asked in plenty of time for me answer it. I could have answered it and then gone on vacation to Las Vegas or the Grand Canyon, gamble away my veil or ride a donkey down an enormous canyon, pack and unpack, and still have time to read the next set of questions.

I have no excuse. I also don't have a dollar.

Any suggestions on how to celebrate Pentecost Sunday?

Pentecost is the birthday of the Catholic Church. Happy Birthday, everyone! That means you, too, Church Suffering!* We haven't forgotten you!

So a birthday cake is in order. Maybe one of those birthday banners you pull out 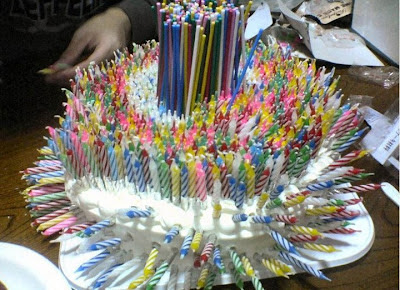 every year. That might be nice. However you go about celebrating a birthday, save the way a Jehovah's Witness does it, which is to say, not at all, will suffice.

But, I would add one more thing you could do, especially since I am so late in offering this advice and it will take you quite a lot of time to accomplish it anyhow.

You might recall that after the Holy Spirit, nee Holy Ghost (we used to always call Him the Holy Ghost, I don't know what happened there, maybe somebody got scared), descended upon the disciples, they all went out and preached and everyone who heard them could understand them no matter what language the listener actually spoke.

You really don't hear about that happening anymore. You hear about people 'speaking in tongues', but I think that is a misnomer. No one understands a word they are saying. There is no language involved. Also, if you were standing here beside me, I would whisper into your ear that I met a man who was part of a 'speaking in tongues' cult of some sort and he told me that someone whispered in his ear, at the beginning of the whole sheebang, to just start babbling out some gibberish and everything would be alright. So I don't put much stock in speaking 'in tongues'. "To whom?" I would ask.

The disciples, on the other hand, were speaking in their own language but they were being heard in many languages. Like at the UN. Only useful.

That's why I'm suggesting that, in honor of Pentecost, you get your hands on some Rosetta Stone software or some such thing and learn a language. Don't worry about the language being useful or popular. Today's obscure language is tomorrow's Arabic.

*The Church Suffering are the the Poor Souls in Purgatory.
Posted by Sister Mary Martha at 3:38 PM

Not only did Easter suprise me this year, Pentacost did too! Sister I was going to dress the darlings in red outfits and serve Red Velvet Cake. Happy Birthday Y'all.

One kiddo had the stomache flu, so I dragged the rest off to the abbey and I compromised and wore Orange.

Well, the learning another language is probably a little harder - especially with all the memories of Freshman year French. Something to offer up! But once again an act of charity if I ever manage to communicate with anyone in a language other than English. Thank you for the Suggestions!

What a good idea! Cool.

Hey! I am an early-aholic too! I don't know how to be late (like you, if left to my own devices).

Hey Sister, occassionally someone with serious head trauma- like from a car accident- comes to and speaks in a foreign language as a result of the injury! Maybe the Holy Spirit is involved there. Who knows? Clearly their guardian angel is or they'd be dead.

You can make a great Pentecost cake. Regular cake, fluffy frosting, seven candles (the seven gifts of the HS), 12 strawberries (12 fruits of the HS...get it?), light the candles (tonglues of fire), everybody blow them out (the mighty wind). Loads of fun and the kids will NEVER forget what Pentecost is all about!

Sister, if have to use a cough drop during mass, does that break the 1 hour fast before receiving communion? What if I just have to get a drink of water? Thanks from one who's still dripping Tiber-water.

Hi Sister,
My name is Michael Hichborn. I'm the media director for American Life League. I'm currently looking for pro-life bloggers who would like to receive action and item alerts from us regarding pro-life issues.

Could you let me know who the patron saint is of Catholics whose faith is challenged and insulted constantly? I am a conservative Catholic who lives in the very secular San Francisco Bay area.

Thanks in advance, and God Bless you.

Ok, here's a question for you. I don't know if this can actually be answered....but I was pondering the other day this thought: Did Jesus ever get sick? At first thought it would seem, yes, "He was like us in all ways except sin" right? BUT really think about it, would God have allowed his holy, sinless and pure body to be prey to say...shigella? E coli? typhoid? Would He not have been all knowing and avoided tainted food? For that matter, would He have been bitten by bugs? Would some disgusting mosquito or tick be allowed to drink and defile His holy blood??

Ok, strange questions, but I'm wondering what others think.

What about Michael the Archangel? He defends the Catholic Church.

I do believe that Mother Angelica, founder of EWTN, received the gift of tongues. She wasn't aiming for it and in fact did try to avoid the situation that led to it. After that, I think the event was repeated for her entire convent and they all received the gift of tongues. It's in Mother Angelica's biography (which I have yet to finish and am not sure where it is now).

My mother's siblings attempted to put 68 candles on my grandmother's cake about ten years yonder... all the frosting melted off before she could blow it out.

P.S.: LOVE the comments on "tongues."

If a family pet dies, what can you tell a child who wants to know if that pet went to Heaven?