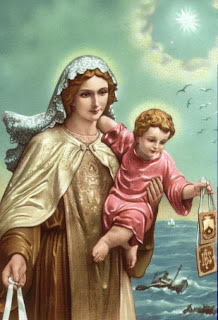 Several years ago my mother gave me a brown scapular with a brief explanation about it's significance, and a hint that I would be needing it. (She was Catholic, I am not. But that's another story.) She died shortly after under quite bizarre circumstances. The scapular sort of appeared at her funeral in a manner that nearly caused one of her Catholic friends to faint.

One of many questions I would like to ask you is do you find it odd that someone would "give" their scapular to another?

I don't find it the least bit odd. This sentence is why: "She was Catholic, I am not. But that's another story."

Not really. That's pretty much the whole story.

She wants you to join her in heaven and since you are not Catholic she was worried that you will be...left behind the door. 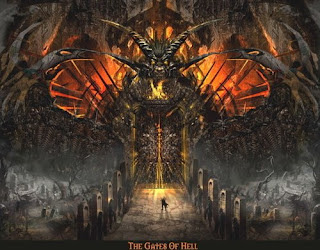 The one that's on fire.

I wrote all about why wearing the scapular can help you get to heaven. Go ahead and have a read. I'll wait.


So, you see, it's not rocket science why your mother would want to at least get that scapular around your neck. The rest is up to you, including joining the Confraternity of the Scapular. I'm surprised she didn't also thrust a green scapular at you. She probably had one under her pillow with your name on it.

Dear Sister,
When you respond to Miss Sandy's question, could you also answer whether the brown scapular needs to be given ceremonially at Church in order to be worn. I was told that it did, and since I am too old go getting special ceremonies to receive something most children get at their First Communion, I do not wear one. I would like to though, since I want all the help getting into heaven I can get!

Nothing so fancy. You seem to be picturing some sort of scapular parade and maybe a Maypole. You just have to take your scapular to the priest to be blessed. There is a special prayer he has to say when he does this. This enrolls you in the Confraternity of the Scapular.

I would think that if you need all the help you can get to get into heaven, you'd jump at the chance to dance around the Maypole in a flowered headdress if that's what it took. Lucky for you, you don't even have to take it to the priest yourself. You can have some youngster run it over to the rectory for you.

I think you want all the easy breezy lemony squeezy help you can get getting into heaven. The Church keeps doing whatever She can to make it ever more convenient for you.

For example, in order to get the full benefit of the Stations of the Cross it used to be necessary to actually go to the Holy Land and walk in the footsteps of Christ. This was no easy feat. You couldn't book a quick trip on Southwest, hop off and grab some falafel and get your indulgence. It would have taken you months to get there. You would have had to have some serious dough or be willing to starve and freeze and boil the whole way there and back. You may well have died before you got there or before you got home.

People complained. Only rich, healthy people could get the indulgence. Our good 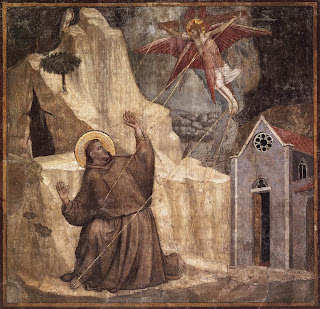 friend St. Francis of Assisi came up the Stations of the Cross as you know them today, so you don't have to drag yourself over to the Holy Land. You can just walk around in your own church.

At least they kept the rule that you actually have to walk around and not just sit in your pew and nod in the direction of "Jesus Falls the Third Time". You don't have to starve and boil and freeze.

And you don't have to dance around a Maypole.

I would be all for instating a Maypole dance or parade, were it up to me. Followed by cake in the school basement.
Posted by Sister Mary Martha at 10:33 PM

My scapular was blessed en masse by the Archbishop. Does this count as being enrolled in the Confraternity of the Scapular?
Thanks.

Sister, my question/comment is about my mother who is Catholic and has taught all of us kids the Catholic faith , but doesn't follow the Pope. It is hard for me, now as an adult, to understand why she still would not follow the Pope.

For many years we were told how 'evil' Pope John Paul II was. Even now when I talk with her she will inform me of more horrible things the Pope did. (and don't even get her started on our new Pope)

I am confused, is it a grave mortal sin to not follow (or I guess even like) The Spiritual Leader of The Catholic Church?

Thank you Sister for all your advice, this world needs you :)

Dear Sister,
May I be so bold as to ask what you think about World Youth Day? As an Australian and a Catholic of a not-so-conservative nature, I'm concerned about how 'we' (Catholics) can defend what seems a blatant waste of the world's resources, Church money and good people's time.
Also, how can it be a good thing to give young people such unreal (and I'd reckon unhealthy) expectations of what it is to be church?
I'd be interested in any advice you have to give those of us who, through no fault of our own, get caught up in it and have the unwelcome task of defending it's existence.
Thanks, Sarah

Wait a minute. When we have a stations of the cross service during Lent, only the priest does the 'walking around the church'. So he's the only one who gets the indulgence??

Sarah, how can you be Catholic and not be conservative? If you are not following the teachings of the church because you personally have decided that they are unrealistic and unhealthy, than you are not in communion with the church and shouldn't worry about defending anything other than your soul before God.

I don't want to sound defensive, because I have a firm policy of not defending anything to 'anonymous' but I thought I should clarify that I didn't say the teachings of the Church were unrealistic or unhealthy (luckily that's not the issue in question because I'd hate to start an argument on Sister Mary Martha's turf). What I said (or at very least what I meant) was I wondered if the expectations of what it is to BE Church that are demonstrated in events such as WYD are not unhealthy and unrealistic expectations.
Whatever goes down between me and God now, or for eternity, is a concern I take seriously although I don't know that this is the kind of stuff we'll be talking about on judgement day, I'd hope the bigger things like loving my neighbour would be on the agenda.

Dear Sister,
I am a recent convert and still learning the liturgy. I notice during Mass, some people choose to outstrech their arms/hands with the priest when saying the Our Father, sometimes even holding each others hands. Why do people do this? I prefer not to because I'm not a touchy-feely type person but will do it if it is something one ought to do and I understand why. Are these people just being touchy-feely hippie types or am I missing something? Thank you!

Always have a brown scapular on..
But I enjoy all these types of things and the more help I have, the better.

Is it all right if I ask a question here? I'm not sure where to send them in, though I looked for an email or contact button. Forgive me if I am just cluttering up your comments section.

I'm 99% (I'm leaving a little room for God to change my mind, since I'm only sixteen) sure I'm called to religious life, but I don't know where I should go. My question is, how do you decide which order you should join?

Anonymous@9:12pm, we don't have to like or love the Pope, though I do. Disliking him is no more sin than disliking anyone else. But when he speaks infallibly, we are expected to listen and obey. God is protecting him and us, after all.

Sarah: I like WYD. It brings some to the Faith, and strengthens others. How much is the value of a soul? How bad is it to lavish upon Our Lord great wealth, as the woman with the the alabaster flask of oil of Nard did? As for unrealistic expectations: what is impossible if God wills it and we cooperate?

anonymous@10:16am, praying the Our Father during mass either in the orans position or holding hands are innovations of the Seperated Brethren. You need not do so if you don't wish. I am not aware of anything in the General Instructions on the Roman Missal (GIRM) regarding the practice one way or another, so in dubiium, libertas would seem to apply.

anonymous@4:27pm: Seek and ye shall find, knock and it shall be opened to you, ask and ye shall recieve. I'd ask my pastor, DRE, spiritual director, and anyone else associated with my parish (and diocese, if I knew them) about your quest for vocation. See where asking and visiting leads you. And don't fret about whether it will lead you to the clergy (if you're a man), the consecrated life or the laity; all are good and vital vocations in the Church.