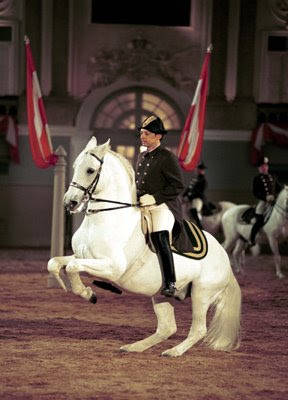 Yesterday was the feast day of Our Lady of the Snows. We took the opportunity to be reminded that we have had a very mild summer here and have not had to pour a bucket of water over Sister Mary Fiacre and sit her in front of a fan, even once. It leaves us free to do other things.

Sister, Do you believe that when it states in the book of Revelation, Chapter 19 verse 11, that the horse is metaphorical that Jesus is riding? Just wondering.

In the fourth century all the bishops of the Catholic Church met. There was a big heresy going around and lots and lots of various sacred texts and stories. Things were really getting out of hand. The meeting was called the Council of Nicaea. Everyone sat down and figured out what would and what would not be included in what we now know as The New Testament. They wrote up the Nicene Creed.

And here we are. Everyone is thoroughly confused by it, especially the...separated brethren, left to wander around in it on their own. 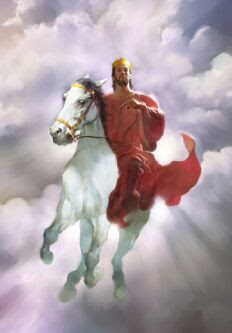 Do I think Jesus is coming back on a horse? Why would he need a horse? Is this supposed to be a horse from heaven? Has anyone ever heard about there being any horses in heaven? I certainly haven't; no miracles performed by the intercessory prayers of a horse. The world isn't completely over yet when Jesus returns, so he could conceivably grab a horse that is alive at the time. He would have to grab a wild horse so that he isn't a horse thief. According to this picture I found, not only is Jesus on a horse, he is on a flying horse. Can someone please explain to me why a flying horse has to gallop?

You see how really silly this whole line of thinking can become. Are the Four Horsemen of the Apocalypse actually four men on riding horses? Obviously not, since what they stand for is named; pestilence and whatnot. 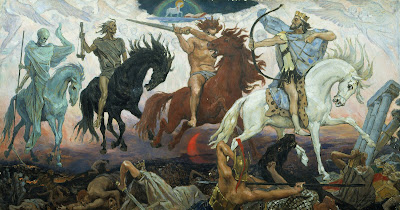 which we are living, no matter how dire they may seem, are certainly no more dire than the awful plague infested oppressive times when Moses walked the earth, or the Apostles, or the miserable state of affairs that so depressed Abe Lincoln or World War II and the actually only atomic blast ever in our history. If we are indeed living in THE END TIMES, there is nothing we can do about it but pray the rosary and wear our scapulars anyhow.

If you're worried about Jesus showing up on a horse any time soon, or in a Humvee, or just appearing in the sky, then for heaven's sake turn off your TV and get on your knees.

In fact, you should be doing that anyhow, unless, like us, you are just watching CNN first to see where to aim your prayers.
Posted by Sister Mary Martha at 2:46 PM

Thanks Sister Mary Martha, that makes me feel better. Yesterday a friend handed me a book about the end times and the Middle East. All very scary stuff. I don't think I'll read it.

I've been trying to tell my husband this for years. He keeps watching all these shows that say the Mayan calendar ends on on 12-12-12, and the world is going to end then. I finally told him a few things:
1. Did it ever occur to anyone that maybe the Mayans were just tired? Maybe they just got sick of figuring out the calendar. They had to stop at some point.
2. The Bible tells us that no one knows the day or the hour. Not even the Mayans.
3. What if they're right? What if the world does end 12-12-12? There's nothing we can do about it, so we may as well enjoy the time we have left.

Nice to know that at least one other person thinks like me.

The reading this morning from the Book of Daniel certainly didn't help THIS paranoid Mommy any...

So thank you for the posting. Perhaps I'll calm down a bit now.

Well, I have to agree with the no animals in heaven theory. Only humans are made in God's image and therefore have the ability to be in God's company in Heaven. As for the end times thing, the physical devastation is not what I'm concerned about, it's the spiritual devastation we are encountering. Forget about the bombs and plagues, how about the unprecedented pride of our times, the greed, abortion, lack of charity, cloning and animal/human hybrids etc. And don't forget the whole purpose of the end and the book of Revelation: we win! (at least if your on the right side!) I think it's an exciting time to be alive. Just think about evil being eradicated forever. And, a huge YES we should all be praying very hard. Whether it is the end or not!

Thanks Sister, I think that people get all kinds of messages and the one that plays in my head is the one that was drummed into me by my (former) church, "Take every word literally or it's unbelief."

Personally, I do believe that God uses imagery for his lessons that he has for me. I still don't know what's imagery or what's not, but I don't know that it matters.

Six days or six thousand years, who knows what He really meant. I also think that God has a great sense of humor, after all, he compared us to sheep, the dumbest animal on the face of the earth.

On a business trip, one of the reps from another district got a little tipsy and told me I was alright, and I wouldn't be "left behind". He was crying. He must worry terribly about people not getting caught up in the rapture, but I heard the whole rapture idea was made up by a guy in Ireland in the 1850s. I did't know what to say to him. Any ideas?

Question 3(sorry!)I said the Luminous Mysteries today and wonder what they mean by "Proclamation of the Kingdom". What do I meditate about during this mystery?

Thanks for your help Sister!

Last Anonymous (re meditation on the third Luminous Mystery): The Proclamation of the Kingdom is everything Our Lord did following His baptism by John, and before His Transfiguration.

Anonymous with the tipsy friend: What's an evangelical who believes in the Rapture doing drinking in a bar? Not that I think you have anything to worry about, but doesn't your friend worry that these little slips tend to call into doubt the accuracy of his prognostications about who will be saved and who will be left behind?

If you haven't read St. Faustina's diary, it's a good thing to get hold of. For those interested in The End Times, Our Lord revealed some more information to her.

love the blog sister, although I believe in the big bang myself I will keep reading ....

Don't forget to read The Rapture Trap. It has an answer to all the rapture arguements.

I think if God created the heavens and the earth and all the creatures in it then I don't see why he wouldn't want animals in heaven - it's supposed to be better than here after all. i don't think it would be just bricks and mortar. Sounds like there might even be horses up there; perhaps Jesus brings one of his own with him and the Four Horseman of the Apocalypse from his stables in heaven. There might even be a place up there for all those dinosaurs that went missing!

In your earlier post about the "Killer Baby Jesus," you say the following:

But...the thing is....a lot of the story of Mary comes from these same gospels that were thrown out. The Mary stories have become what we call Sacred Tradition. When the church uses the word tradition with a capital "T" it means they want you to pay attention.

So yes, to the story of Mary, no to killer baby Jesus.

I am interested in which stories of Mary these are. I've heard some pretty fanciful ones about Mary that were never "officially" included, but made people happy in the Middle Ages, like the cherry tree one, or the one I've heard on the History Channel about the midwife who was called to verify Mary's virginity after the birth... You know, I feel like I should head for Confession after repeating that one, but I didn't make it up or hear it from a naughty boy on the playground, I promise!

Actually Sister, we are indeed living in the "End Times" and have been doing so since Jesus ascended into Heaven. We know neither the time nor place of the His second coming. Of course I understand you are referring the "misinterpretations" of Revelations, which was really about the fall of Jerusalem in 70 a.d.

My 12 year old daughter is going to be sooo heartbroken to find there aren't horses in heaven.

Are you really sure?

rest assured that heaven will be so wonderful that nobody will even notice the absence of that wonderment of God's creation known to us as the horse.

Perhaps He will return riding the horse he stole. Jesus is a horse thief according to Luke 19:29-36, and his disciples are accomplices. He promises to return the stolen colt but nowhere is there a record in scripture that the colt was returned.