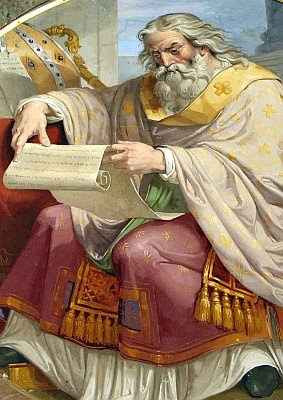 It has been two whole years since we had bees take over our worm farm while I was away in the Midwest.

And then, just as suddenly as they arrived, they left. I had wished I had noticed their departure, because if I had only noticed, I would have had quite a nice stash of fresh honey. As it happened, by the time I noticed they were gone, the honey comb had started to turn itself to compost.

But God has smiled on us today. Out of the blue, the bees have returned, as though they had some sort of time share in the compost bin. They are summering in our driveway. They are having cocktails by the ocean.

Isn't that surprising? Why did they skip a year? How did they find the same compost bin in the same driveway two years later? They have to be different bees. Bees don't live for two years. Are they the descendants of the other set of bees who passed the lore of the compost bin of the nuns onto to their future generations? 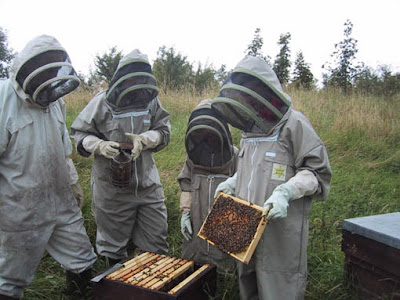 I don't know the first thing about bees, but I'm half tempted to borrow a bee keeper suit from someone and see what's what in there.

Meanwhile we are peacefully co-existing. No one has buzzed into the car, or chased anyone, or bumbled into the house so far. The worms are thriving along side.

Sister St. Aloysius is not entirely happy about the bees, as she was chased by them once. But I have to admit that I'm very pleased they came back. I felt a little insulted when they left as suddenly has they had come. Now I feel like the charming hostess of a popular bee bed and breakfast. 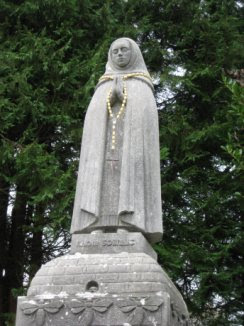 I could call it St. Gobnait's Inn. Maybe that's not a good name. Who can pronounce it? St. Gobnait is a 5th century Irish saint who is the patron saint of bees. St. Ambrose is also the patron saint of bees. Both of the patron saints of bees for dubious reasons. St. Ambrose was known as the honey tongued preacher. That's it for an Ambrose+bee connection. St. Gobnait had her named changed to Abigail and also Deborah. The Hebrew meaning of "Deborah" is "bee". In a which came first, the chicken or the egg, type dilemma, one of the miracles attributed to Saint ( meaing that she was dead at the time) Gobnait aka Abigail, aka Deborah, was that she protected a parish by unleashing a swarm of bees.

Maybe St. Gobnait has unleashed a swarm of bees into our compost bin and that's how they got here. It's as good an explanation as any.
Posted by Sister Mary Martha at 12:58 PM

When a new generation of bees produces a new queen, she will leave the hive and look for a location to set up a new one. Some other bees will follow her (there can't be more than one queen per hive). It's perfectly natural that a few years would go by without them returning. Each year, the old hive dies off, at least that's what I've been told in the past. I have friends who run an apiary and honey business.

The only thing I'm worried about is a hive in the compost bin, as compost is filled with bacteria, and that can't be good for the bees.

There are many varieties of bees, some are less aggressive than others.. but all will make chase if they feel the hive is threatened.

I'm not actually wanting to comment on this article, but nevermind my geeky aptitude, I can't find a "contact" you button.

I hope you weren't planning on using the compost any time soon.....They may think they have squatters rights.

Oh, so that's where the bees have gone...

So we should be praying to St. Gobnait and St. Ambrose to save the bees?

...please where can I buy a unicorn?