It Really Isn't Any Fuss

Happy Father's Day all you dads! I always think of Groucho Marx's song on Father's day. Here are the lyrics, sans the tune:

Amusing. None of those Marx brothers were particularly good role models, though.

The ultimate role model, of course, was St. Joseph, who also had to take someone's word for it where paternity was concerned. The fact that he did is in no small part the reason for his sainthood.

Some scientists recently came out with more information on what happens to us when we dream. The basic premise of their findings was that dreams allow us to strip the emotion out of our daily drudgery, encounters and problems.

This sounds like a bad thing, but it isn't. It's a very good thing. According to these scientists, the process actually makes us more compassionate towards others by getting rid of some of our own emotional baggage. It's why conventional wisdom has always been to "sleep on it". It's why you often see things more clearly in the morning. 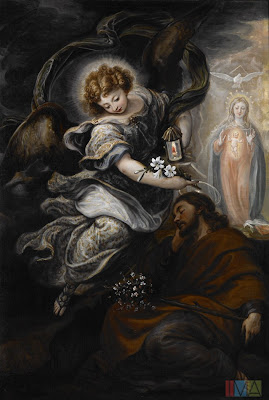 I have been saying this myself for years and years. Dreams are to the brain as de-fragmenting is to your computer at night.

Which brings us back to our Father's Day pal, St. Joseph, whose sainthood was brought to us by a couple of important and enlightening dreams. Let's not forget, however, that St. Joseph had the help of angels in his dreams.

But I can't help but think after a good night of REM sleep, how much easier it must have been for St. Joseph to get with the program. Sure the angel told him everything was okay with his situation with Mary, but hearing that and feeling good about it are two very different things. He still had to deal with the whispers of the nosy neighbors, no doubt. I'm sure he didn't really feel much like packing up the donkey and moving to Egypt in the middle of the night, either, but maybe his dreams helped him handle it all.

And of course, everything is harder to bear when you're tired. 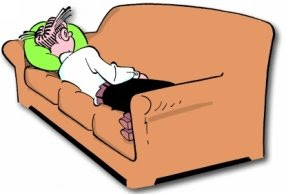 May I propose this idea for the perfect Father's Day gift? In honor of Dad and St. Joseph, let Dad sleep in. Take the kids to Mass without him and let him go to the late Mass. Or send him off to 5 o'clock Mass tomorrow.

Then do all Dad's chores while he snoozes on the couch like Dagwood Bumstead. Speaking of Dagwood, feed Dad a turkey sandwich for lunch. The tryptophan in there will have him out like a light.
Posted by Sister Mary Martha at 10:06 AM

"None of those Marx Brothers were particularly good role models."

Actually, Harpo Marx (in real life, anyway) wasn't a bad role model. Unlike his brothers, he was happily married and adopted four children. He was also a hard-worker, a dedicated musician who practiced for hours every day, and well-liked by almost everyone he worked with. His screen personas were probably not good role models, though.

Still, no one is as good a role model for fathers as St. Joseph!

We went to Church last night so this morning would be a little more relaxed.