Fish Out of Water

As a nun, I often find myself in uncomfortable situations. Everything from suggestive billboards to a backyard party where double entendre "jokes" are flying fast and loose. (Please forgive that double entendre joke.) I am, of course, a major wet blanket, just by standing there in my nun garb.

Which, by the way, has always been my main argument for those who insist nuns and clergy should always be in 'uniform'. Trust me, people behave much differently when we are in "uniform". They behave, in fact, the way they should behave all the time. The argument goes that we should always be 'identifiable', like a police officer, easily spotted and found.

And that's lovely. But it isn't the full reality. The real truth is, for the most part, the reason people want a nun or a priest in a nun or a priest costume is so they behave properly around the nun or the priest.
I digress. 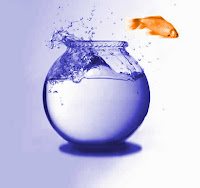 I often find myself in the middle of situations where I'm not entirely sure how I should behave. I am in uniform and I can't just fade into the background. On top of that, I've noticed that people are looking at me to see how I am reacting, when, in fact, I'm not actually reacting, but trying to figure out how to react.

Last week, I was invited to the baptism of man I have known for many years. For quite a number of those years he was a roaring drunk. He finally found Jesus, sobered up and this was his big day. He wasn't becoming a Catholic, unfortunately, but we're happy for him that he's found Jesus somewhere and that he's finally sober. 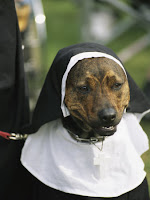 So Sister St. Aloysius and I went to the baptism. I have to wonder what kind of sinful thoughts we caused just arriving, as this was a Baptist church and in my experience with Baptists, I've found quite a few who think, "Catholic=Devil". And we're in habits to boot. If there were any among that congregation who equated Catholics with the devil, then two devils had just arrived in their devil uniforms full of ribbons and medals.

Everyone behaved themselves. As usual. 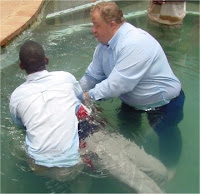 The whole ceremony was very pleasant. There were three people being baptised that day. These people had a sort of little swimming pool into which the baptisee had to wade to meet the awaiting preacher. There were three little steps going down into the pool. Then the preacher would put a hanky over their faces and dunk them backwards.

But when my friend stepped on the little stair, he slipped. The air was full of arms and legs and down he went with a sploosh. The crowd gasped. I'm sure we all thought for a second there that he had cracked his head on the steps. But he was fine. Wet, but fine.

He had just baptized himself, sort of. And...it was really comical. Really, really comical. The combination of being a fish out of water there myself, the outrageous pratfall into the drink, the gasp of the crowd proved, to be too much for me. I tried not to chuckle, smirk, smile, grin or grimace while trying not to grin. Out of the corner of my eye, I could see Sister St. Aloysius squeezing her face together so as not to laugh.

Laugh! Oh, please no! Don't laugh! Not here! Not now! Not two fully uniformed devils laughing at a Baptist baptism!

We are nuns, after all. If nothing else, we are disciplined. We both chuckled. As quietly as possible.

At the reception afterward my friend bounced over to me. "Sister!" he said. "Thanks for coming! I bet you laughed when I fell into that pool!"

Sister (and other commenters); this is off topic, but I have another question. It should be easy for you. The good news is, I finally got enough courage to take myself to Mass. The bad news is, it was a church 3 hrs from my home. I was travelling. The Question: What is a non-Catholic supposed to do at the Sign of Peace? They shook hands and said "may the Peace of Jesus be with you". Was I supposed to participate? (I did, and there was no lightning...) This was the first Mass I have attended. I remained kneeling for the Eucharist. I hope that was ok. An anonymous commenter told me about going up to receive a blessing but I wasn't ready to do that. 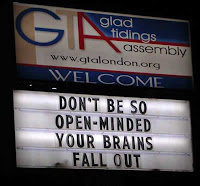 Well, whatever you do, don't laugh.
The rule of thumb, for both of us, is "when in Rome..." You only have to refrain from the sacraments and the only sacrament at the Mass is the Eucharist. You can sit, stand, kneel, pray, sing, shake hands, and go up for the blessing.

Or you can sit quietly through the whole thing and do nothing at all.

When my mother was a little girl, the nuns told her that she was not allowed to go the churches of other demoninations at all.
When I was a little girls the nuns told us that we could go to the churches and even the services of other denominations, but we were not allowed to pray in there because God "wasn't there". I was very confused by this, because they also taught us that God is everywhere. I had to imagine that God was indeed "there" but he was holding His Ears and humming in there.
We've all come a long way in a short time.

Posted by Sister Mary Martha at 10:52 AM

My goodness you describe the scene well!

I can imagine how uncomfortable you must have been trying to hold in laughter...

I remember when I first wanted to attend the service of a "Full Gospel" church, my mother told me to sit near the back so I could leave easily if I started to laugh at what I saw.

And my mother isn't even Catholic.

And I didn't find it amusing.

I think Jesus would have laughed. If He knew the slip-ee wasn't hurt, of course.

FWIW, nuns and priests are frequent guests in our home. They can be in uniform or in mufti—makes no difference to us (or, I hope, to our other guests). We invite them because we like them and find them interesting and generally good company—fun to be around.

Sister - I really like your blog. I was raised in the Baptist Church - in the church I grew up in all the Baptists would have been stuffing down the laughter too! When I was growing up my Catholic friends told me the thing about how they could not go to any other church so it wasn't just you. I live in one of the most conservative Catholic diocese in the US so I have felt like I have a big NOT A CATHOLIC sign on me when I go to a wedding or funeral. A teacher I work with who is a former nun told me that it depends on the parish as some are more "laid back" than others. She was my version of a live ask Sister Mary Martha!!

Speaking of water, I recently studied for a semester in Rome, and during my semester, I traveled to Lourdes. I brought back several vials of water from the spring, but I'm not sure what to do with my own vial of water (given to me by another friend who went there), or what to tell people who I give these bottles to when they ask me what to do with it. I know it's not holy water unless it's blessed by a priest, but just what does one do with water from Lourdes?

Sister, you are soooooo funny! When are you going to write a book? I would run out and buy it, if you did!

P.S. I am a Baptist who became a Catholic a year ago. . . I know the whole Baptism in the pool drill. . . ridiculousness!!!

"when in Rome..." A Hindu friend of mine, and his equally Hindu parents, visited the Vatican while on vacation. Mass was in progress, so they sat and watched. As others went up to receive the Eucharist he and his parents did too. He said no one said they couldn't and he didn't know that it was a 'Catholics only' thing. I told him that God probably didn't mind since it was an innocent mistake. : )

The blessed mother Elisabeth Hesselbladh used to attend various churches during her grow-up time in Falun. She searched but in vain... Later she found her home in the catholic church, founded a new branch of the Birgittines and is on a good way to become a saint.