To Hell in a Handcart 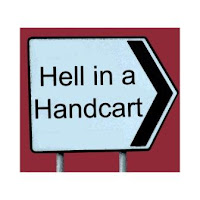 I try to stay current. I suppose one of these days I'll have to break down and read some Harry Potter books, just so I can keep up with the discussion. I don't really mind, I just have so much reading to catch up on that I hate to take the time reading something that doesn't interest me. Maybe after I actually start reading it, it will interest me.

I'm not holding my breath. I have never been able to read any of those books about the hobbits. I have tried.

But in order to address the concerns of those in my actual instructional care, I think I'm going to have to hold my nose and read that "Twilight" junk, just so I know exactly how to combat the madness. I mentioned "Twilight" other day, just in passing. I thought the youth should be steered away from that silliness because it is all about teenage sex. My readers have informed me otherwise with responses that went more or less like this:

A slight disagreement about Twilight, sister. While I agree Twilight is worth being avoided, it's not an issue with teenage sex--after all the main character and her vampire beau don't ever become intimate until after they've been married. The issue I think Christians should take with the novels is that the main character is so readily willing to risk her own soul to be with the vampire. (That said, the clearly fantastical part of this series is that Edward, the vampire beau, is so stubbornly unwilling to risk his girlfriend's soul by letting her become a vampire or by sleeping with her. Teenage boys are rarely that concerned with their girlfriends' souls. Usually they're concerned with other parts of their girlfriends.)

It's still about romance, isn't it? And isn't romance, in novels, all about sexual tension? And then on top of that the guy is a vampire, which is an evil thing that lives forever by drinking the blood of others. Unless he stays out too late and the sun turns him to dust.

At least he has a curfew.

At least he can't loll around on the beach.

There is just no "upside" to reading "Twilight" that I can see. It really isn't just a fun fantasy book, as I imagine Harry Potter to be. It's a creepy temptation. A teen tittlation.

And if that isn't enough for you, check this out.

Have you ever heard of such a stupid thing? No, you haven't. 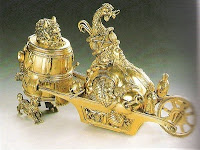 I am not one to run around with my hair on fire, crying out that the youth of today are going to hell in a handcart. They may be doing just that, but that is the nature of youth of every generation.
Each generation has it's own handcart, is all. We still have to get them out of it.

Biting each other to show affection. Indeed.

It's a tricky situation, though. The other hallmark of youth, besides finding a handcart in which to travel, is that if you tell them not to get in the handcart, it makes them really, really want to get in it.

That's why I think I'm going to have to read it. Ugh. Because the other thing they like to do, is be critical of whatever everyone else likes. They love nothing more than to think something is "stupid". I think I can light that fuse. Once you poke a hole in the story, they descend on it like vultures, tearing it apart. And once they think it's stupid, we've won.


Maybe I'll have them write an essay about what married life would actually be like with the vampire, once they never see each other because she has a day job.

For now, until the next handcart comes along.
Posted by Sister Mary Martha at 11:52 AM

Poor Sister! Those Twilight novels may have catchy plots for teenage girls, but they are painfully poor literature. All the overdone language in the movies is 10x worse in the books. My disclaimer is that I only know this because a 50 year old friend of mine was given 2 free tickets to the midnight premier of #3, and I went along purely for the cultural experience. At least they are a really fast read!

Sister, consider yourself fortunate. Stephanie Meyers had almost no knowledge of traditional or recent variations of vampire lore when she sat down to write, and she kept it that way.

It turns out the reason that HER vampires stay out of the light is that their flesh is rather like rose agate/quartz, and sparkles in the sun.

I have never read the Twilight series but my daughter, who hates the books, told me that she thought it was the wrong message to send to teen age girls. The vampire is controlling and Bella is all about doing what he wants.

It sounds like they need some mental health professional to write about this type of behavior and write that this is not the norm. A person can read the signs and symptoms of guys with control issues, it is a form of abuse.

Is it wrong that I have spent the past day or so trying to remember what "handcart" my generation was driving? I'm sure we did stupider things than showing our love through biting! Stirrup pants maybe. Those were pretty stupid.

Maybe I'm just lucky enough to have selective amnesia of my teenaged years.

I think most of us have selective amnesia about our teenage years.

On the plus side, the young (well, Edward isn't so young, but he LOOKS young) lovers maintain their virginity until they are married and Bella absolutely refuses to abort their child, even though, as a half-vampire, it apparently is eating her from the inside out (ewww). And, Edward's "family" are all "vegetarian" vampires, abstaining from human blood.

On the minus side Bella is a self-centered, spoiled brat. I don't think it's Edward who controls her; it's she who tries to control him and looks for ways to risk her life so she can "be" a vampire with him. She is even willing to compromise her salvation and her family and friend's safety because of her stupidity and selfishness. She is a miserable role model for young women.

Harry Potter is equally manipulative of its readers. "Magic" appears in a very appealing light in this series and although, as you've said Sister, "magic" is make believe, children who begin to play with it can easily be led to real danger through things like tarot cards and ouija boards.

It's such a shame that parents (and many teachers) are so delighted to see children/teens reading SOMEthing that they don't care what it is that's being read and let the children establish the standards.

Whoa, whoa, whoa! Harry Potter does have evil in it - I certainly won't deny that, but the underlying message in the series is that good always conquers evil -by the means of sacrificial love. If that's not Christian I don't know what it. I understand that fantasy may not be your choice in reading, but please understand that there is a purpose to the serious, it's not just for entertaining teenagers.

Many people, adults included, have difficulty telling reality from fiction.

I remember reading an article back in the early 1980s about a J.R. Ewing who lives in Dallas, Texas. He is a realtor, so taking his name out of the phone book is not an option. People would call information and get his phone number, call him at all hours of the day and night (sometimes collect) to tell him what a louse he was.

So, clarifying fiction and nonfiction is a bigger job than most may realize.

Wow. The two anonymous posts immediately following Kat demonstrate quite ably why fantasy in general and Harry Potter in particular are matters of prudential judgment, with the first seeing the hazards (which I won't deny) and the second finding the good and holding fast to it.

I read all of the Twilight books when my daughter started reading them. The biggest issue is that the vampires liken themselves to God, especially in the last book. The overall theme is that they have, of their own accord, taken their evil nature and made it good and then call themselves gods. Perhaps this theme comes from the author's upbringing. The rest of the story is no less dysfunctional than every other teen/romance/fiction on the market.

You should definitely read the books. It always helps to know what you're talking about.

Hey! We heard the story of Mary and Martha in the Gospel today! I feel the need to congratulate you. Do you mind giving us your reflections on why this passage from the Bible was so meaningful to you?

There's been a quote circulating on the internet lately that says, "Harry Potter is about confronting fears, finding inner strength, and doing what is right in the face of adversity, Twilight is about how important it is to have a boyfriend."

Nono, Edward isn't a teenage boy. He's an old guy who LOOKS like a teenage boy because being a vampire is great for the complexion. So you can add "pedophile" to his list of flaws. Also, "stalker."