Martha, Mary and Me

Hey! We heard the story of Mary and Martha in the Gospel today! I feel the need to congratulate you. Do you mind giving us your reflections on why this passage from the Bible was so meaningful to you?

Who says it was meaningful to me? Of course it is, but not moreso because of my name, if that's what you were thinking. I am actually quite partial to the Beatitudes and the "Consider the Lilies" speech if we wanted to put it to the "if you were alone on a desert island and could only have one or two Bible passages..." test. 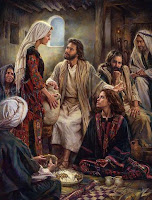 I have talked about Mary and Martha before, though. I am quite attracted to poor beleaguered Martha. I think anyone could understand that she must have thought she was doing exactly the right thing with a houseful of hungry dinner guests and her sister was doing exactly the wrong thing, lolling around listening to Jesus blab on.

I'm sure she was thinking things like, "Well, I'd like to loll around around and listen to Jesus, too, but these falafels aren't going to fry themselves!"
Turns out, when Jesus is around the falafels do fry themselves.
I do hope they all helped with the dishes.

The story doesn't end there, though, does it? No, it doesn't, because Martha is the first person to actually figure out just who Jesus really is. On top of that, when Martha announces that she believes Jesus to be the Messiah, the Son of God, she says she has always believed that. That means she knew she was waiting tables for the Messiah and she thought that it was important to give the Messiah a nice dinner.

So apparently, unlike her sister Mary, Martha could listen to Jesus and get dinner on the table and still had the wherewithall to ask Jesus to bring her brother back from the dead.
That's why I like Martha so much. She doesn't always get it right, but when she gets it, she really gets it. I hope I can follow in her footsteps.
And do dinner for 15 at a moments notice.
Posted by Sister Mary Martha at 3:22 PM

I wrote about Martha on my blog today too! I agree with you, it's not like the housework didn't need to get done!

Sister, your writing is hilarious as well as edifying! Thank you for your blog. I have a question for you.

I am currently starting the process of applying to colleges. There are several fabulous ones I have my eye on. I was wondering, is there a patron saint for getting into your top choice colleges? How about one for winning scholarships (which I sorely need)?

Here's a topic I would appreciate you discussing: papal infallibility. I am a Catholic convert, and for a long time, this was on my list of reasons I couldn't be Catholic. Then, eventually, I learned that papal infallibility had only really been invoked a couple of times, which made me feel better; it wasn't like the Pope was prone to ego-tripping statements of infallibility just to show he was the Boss.

Then I learned that the two times since Vatican I that papal infallibility had been invoked had to do with the Assumption and the Immaculate Conception. Hmm.

If believing that Mary was conceived without sin and assumed bodily into heaven help you grow closer to God, well, I'm not going to be one to debunk. And that was the attitude I brought into the Church when I converted.

Personally, I would think that if Mary was born without sin and was assumed into heaven, those sorts of details might have worked their way into the writings of the earliest Church. I have to say, I have trouble buying in to those two tenets of the Faith, and the fact that the Pope spoke infallibly in their favor doesn't so much elevate those doctrines in stature as it does lessen the papacy a little for me. It just seems to much like a father being questioned why something is so and replying "Because I said so," only because he knows he doesn't have a good answer. And the louder Dad says that, the more you know he's on weak ground.

But I'm sure I'm missing something here.

I'm the oldest of 5, and I've always felt like I was "Martha" of the family, And I've always wanted to SLAP Mary and let HER do the work while I lolled around!!

I really want to recommend "Hail Holy Queen" by Scott Hahn. Dr. Hahn is a convert to the Catholic Church, as well, but before he was Catholic, he was a very anti-Catholic Evangelical preacher (his conversion story is quite a good read, as well; it's called "Rome Sweet Home"). He knows his Bible backwards and forwards as well as the writings of the early Church fathers, and in "Hail Holy Queen" you'll find some very scripturally sound explanations of Mary's place in the Church. It's very readable and I think you will find it useful.

I second KimK's suggestion. Dr. Hahn is VERY readable and articulate. Also, Anonymous @5:45, those dogmas were pronounced more because of a "grassroots" kind of belief of the people than a "because I say so" attitude. The pronouncements only made a traditional devotion more official.

Yes, Martha gets an undeservedly bad rap. And if she hadn't made dinner, one guess who would have gotten the blame. Yup, poor old ignorable Martha! I've always liked Martha.

And I've always liked the older brother, too, so there LOL.

You have a lovely blog. God bless you for all your good work for the Lord.

When I was being received into the Church, Martha "found" me--she was a saint I could relate to, given that I could so easily see myself telling Jesus to make my sister get in the kitchen to help me. Over the past few years, I've learned so much about her and through her intercession--not the least of which is to keep focused on the importance of things in the middle of "things."

Sister Mary Martha you lighten my heart with laughter. Keep it up. You, my dear, are hilarious.

I'm adding you to my blogroll....so glad I found you.

Sister you always have a way of making a blog post very entertaining!

Dear Sister-
I love your blog and I find much useful information here. My question concerns Eucharistic services in our parish. Our priest is sick, so we have lay persons conducting the services daily. Is it ok for women and men to wear albs for the service? And is it ok for them to ask members of the congregation to preach on the gospel? I'm uncomfortable with this arrangement, and I hope our priest gets well soon.
-- Stephanie

St. Martha is the saint of the day! I am answering your question after the "Leave your comment."

I love your post! I have to say I am partial to Martha too. And I think faithful women are like both Martha and Mary - active and contemplative.

I have written about Martha and Mary in my book "Grace Cafe: Serving Up Recipes for Faithful Mothering" (Circle Press, 2008).