We have some sticky questions to answer, but today we're going easy on ourselves with a question about today's Gospel reading:

Me again with another question, I can almost here the sigh. Today's Gospel has a quote from Jesus "I tell you, among those born of women, no one is greater than John; yet the least in the kingdom of God is greater than he." So is Mary somehow excluded from this comment or is John the Baptist also in heaven?

I am sighing, but not because of your question. Just some general, 'Christmas is any second now, what have I forgotten' sighing.

You might want to read the whole passage from Luke here and get some context.  John the Baptist has sent his disciples over to see if Jesus is the One John has been telling everyone to about.  During all of this, the powers that be, or were, have been grumbling that John is too austere and that Jesus is having too much fun, eating out with the tax collectors. Jesus has kind of had it with everyone's attitude. 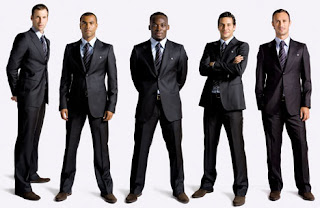 He says to everyone, "What did you think you were going to find when you found John? A guy in an Armani suit with gold teeth? No, you are going to find a man who is following his path to God in his own way,  a way that wouldn't hurt you to experience."

Jesus doesn't really say that exactly, but that's the sentiment, I think.  It's at this point that your quote comes in, which is to say, "John is a great saint, the greatest saint, but all saints are equal in Heaven." (I hope you realize that everyone in Heaven is a saint.)  Jesus is trying to tell everyone that God doesn't love one person over another and that there is more than one path to harmony with God. John went the sack cloth and ashes route. Jesus showed us a more gregarious path.

At this point in time, no one was in Heaven, including Elijah and Enoch and Moses and Abraham.  John and Mary still walked the earth and Heaven was closed. Heaven did not open for business until Jesus died on the cross. 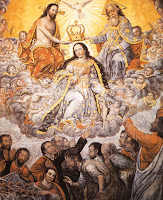 Mary is the Queen of Heaven. In her life on earth she was the person closest to Jesus.  She was His mother, she raised Him, they share DNA, she was with Him at His death. She said yes to God in all things. She is our greatest example of obedience and grace.

In this passage, Jesus is simply saying that of all the people on earth, John fully understood what was happening right then and there, making him the greatest man on earth and a great prophet, whatever the powers that be (were) thought about John's lifestyle.

What are we supposed to do with today's reading? Why do we have daily readings? So we can think it over. What does it mean that the greatest prophet is equal to the lowly? It seems to me that mankind has never gotten very far away from the thinking of the powers that were. We constantly place ourselves and those around us in some sort of pecking order due to status, money, fame, good deeds, failure...and we contiunally readjust the list. Jesus told us over and over again that God does not do that. He never turns from us, although we may turn from Him. There is no pecking order. There is only God and His Love.
Posted by Sister Mary Martha at 12:00 PM

thank you for this. from someone who has felt so low, it is nice to know that God can see my worth, even if i cannot.

Hey Sister Mary Martha, my name is Sandra. I read several blogs on religion and prayer and I've i feel like I've ended up here once before. I ran across this prayer exchange website and I haven't had the chance to ask my Church what their stance is on it.

I'm a bit confused, I think that there are some benefits to a site like this but some Christians might find it questionable.

If you're looking for a topic to blog about, I would be curious to hear your thoughts and know what your stance is on this type of prayer service.

I have your blog in my feed reader so i'll check back, God bless
Sandra J

A beautiful entry, Sister. May you have a wonderful Christmas season!

Thanks Sister,
To womanNshadows, your comment made me think immediately of a really great book I've only recently come accross in the condensed booklet version. If you haven't read "I am with you" by Father John Woolley, try and get a copy.

If heaven wasn't open until Jesus died where were all the souls who had already died. Were they suffering or just in waiting.

womanNshadows, remember that it is when we feel furthest from Jesus that he holds us closest.

Anon, if you recall, when Jesus died, he descended into Hell, to free the just who had gone before him. They waited and are now in heaven.