Angels in the Plains 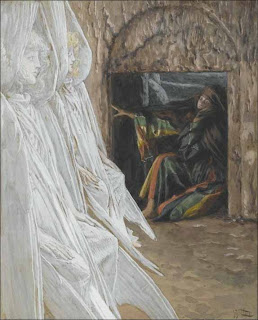 While we're on the topic of the separated brethren we have a couple of separate comments and questions about what goes on in the Not Catholic realm.


When I encounter an In-the-bible, Exactly-as-written Evangelical, I ask them, "What about the different Resurrection accounts?"


Did the women see an angel? Did they talk to the Risen Christ?
Did they run to the Disciples and tell them the Body was missing?


Each Apostle emphasized different aspects, may have forgotten or misremembered a detail or two. The important message is there. "He is Risen!"

It IS fun.  Are you sure you didn't talk to me first?  I've been using that one for years. Great minds and all that.  I never went into all that detail, I simply asked, "How many angels were at the tomb after Jesus left the tomb?"  And the answer from the Bible is. One.

If we take the average number of angels at the tomb the answer is one.  Right?  I'll ask Sister St. Aloysius. She's a math whiz.  She's busy pouring over pie recipes. I don't want to get in the way of that.

In any case, I have used that question numerous times and then....silence...no answer....

I particularly like that question because it's something we all agree happened.  We might disagree about what Jesus meant when He said, "Take this and eat, This is My Body..."  A lot of people think that direct order was symbolic.  But we all agree Jesus rose from the dead.  He was in the tomb and then He wasn't.  There may or may not have been angels.

And that right there rather closes the argument about how one should think about the Bible, does it not?  Unfortunately, we all know it doesn't.  It should.  But it doesn't. 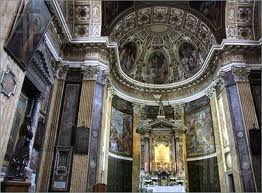 Thanks! Great for stocking stuffers!  What better Christmas gift than your own personal patron saint? 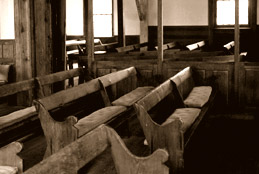 But about those churches.  The simple answer is that the separated brethren who are most like the Roman Catholic Church (like the Anglican, Episcopal and the Eastern Orthodox Churches) have ornate church buildings.  The simple churches come from the Protestant movement.  Note the word "protest" right in there.

The Protestant movement arose as a direct response to the Church's ornate wealth in the 15th and 16th centuries.  Martin Luther, the granddaddy of the movement was really angry at the Church's fund raising tactics and he wasn't wrong.  The Church responded by making necessary changes but that horse was out of the barn.

Of course, it's all way more complicated than that, but that's the deal in a nutshell.

The second part of your question is very intriguing to me. Frankly, I have asked people point blank what they believe, and past "Jesus Saves" I can't get a coherent answer.  Episcopals are okay with the saints and Mary (I think...), but the Anglicans and the Episcopals are... Catholic Lite.

And after that, other than "No Mary, No Saints",  I'm at a complete loss.  Transubstantiation?  Yes to some, no to many.  Original Sin?  No clue.  The Holy Trinity?  The Holy Spirit?  St. Paul?  A lot of what Luther believed was from St. Paul.  I think.  How does one eschew the saints and read the New Testament, when the authors are all saints?  Baffling. 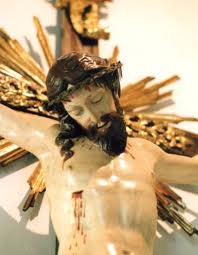 I had a book a while back that was one of those "For Dummies" books that traced the origins of the Christian faiths.  "Christianity for Dummies", I think it was.  It was interesting in that each new sect developed because they disagreed with a thing or two in the sect before.  But what they actually believe and don't believe really wasn't in there and left me with more questions than answers.

I have had no luck by asking individuals, either.


And finally, the Crucifix. Again, Catholics for Jesus on the Cross and Protestants go for plain.  That's because Catholics feel that we must realize the full measure of Jesus' sacrifice for our salvation.  Protestants want to emphasize the resurrection.  To which Catholics reply, "That's too easy."  It wasn't that easy.  It isn't that easy.
Posted by Sister Mary Martha at 9:23 PM

Of course it's more complicated than what I'm about to say but I thought I'd chime in. Some protestant churches have confessions or catechisms. The Reformed churches (Presbyeterian, Lutheran) have some historical confessions statements of faith--Westminster Confession for Presbys, Augsburg for Lutherans. There's a Lutheran and a Methodist Book of Worship that would give contemporary polity. Non-denominational churches will generally have a statement of faith on their website. And the Baptist churches are non-creedal, which means they reject any human formulated creed or statement. So good luck with that.

Many years ago (like 30!) our parish participated in an ecumenical series during Lent. Each week we met in a different local church. The pastor and the church members led a brief worship service (acceptable to all) and then a discussion of the beliefs of that church, with focus on two questions: What do we believe that all or most Christians believe? What is our unique understanding and practice? It was very enlightening to everyone. We had a book (I forget the title, but the author was Leo Rosten) that had a chapter on each religion.

The big difference with Anglicans/Episcopalians and Catholics is the Pope. It's not the Pope himself -- he's a great guy -- we just don't have the same sense of papal infallibility as Roman Catholics. More similar to Eastern Orthodox, we believe that the Holy Spirit isn't going to let the Church completely mess up under a Pope's guidance... but, Popes are human and might mess up like all humans do. :) There are groups of Anglicans called Anglo-Catholic who want to work together with the established Catholic church and be more united, even. :)

I'll chime in for my branch of the church as a frequent reader from the Anglo-Catholic branch of the "separated brethren". The Anglican Communion churches do tend to have formal statements of faith, but with more latitude than the Roman Catholic Church, as they do not accept Papal decrees as settling matters of faith. We use both the Nicene and Apostle's Creeds as a regular part of our Liturgy.

The Catechism formula used in The Episcopal Church (USA) can be read here: Book of Common Prayer Online

We believe in the saints in broad term; as all the members of the Church Triumphant, including the Virgin Mary, but we do not have a formal process of canonization. Many Episcopalians will also fold the Church Militant in to their understanding of saints. Some churches still make use of Liturgical Forms and prayers which are directed to Mary or other Saints (Indeed some among the Anglo-Catholic tradition pray the Rosary in classic 15 decade form), but most churches in the Anglican Communion direct prayers to the Father in the name of the Son and do not direct prayers to the saints in personal devotion.

The church does not hold that transubstantiation is a required part of the efficacy of the Eucharist, although God is of course free to do as he desires and may elect to alter the Host if he pleases. I would hazard that a majority of Episcopalians do not believe in regular transubstantiation of the Host.

Original Sin is a trickier bit that would require far too much defining of terms for a blog reply.

The Trinity and the power of the Holy Spirit are vital to our understanding of God and the Church.

Likewise the words of Paul are read very frequently in our lectionary.

Keep up the good work, I may not always agree with what you write, but I always enjoy reading it.

Beliefs.....isn't it a case of into which family one was born? Most of the time, anyway, Blessed John Newman and Chesterton notwithstanding - oh, and St Paul himself.
But for most of us, what we believe, or not, is what we were brought up with.
Strangely enough I have never had the slightest difficulty with rationalising the beliefs of my own mother and father - one was Jewish, the other Catholic, and that's just the way it was.
Early lesson in Live and Let Live - and I love BOTH traditions.

Thanks so much for what you write. always interesting and witty, and i very much enjoy reading it. With Lutherans (that's me!) it is a bit easier, as we have the Book of Concord, first published in 1580 in Germany to answer all the questions that were springing up. there is even a website for it. http://www.bookofconcord.org/

We (like the Anglicans) use both the Nicene and Apostle's Creeds as a regular part of our Liturgy. Unlike the Anglicans we have a strong sacramental interpretation of the Eucharist. We believe that the bread and wine do become the body and blood of Our Lord, but we use the term 'real presence' rather than 'transubstantiation'.

Our lectionary covers (broadly) the whole new Testament over each three-year course, and seems to mostly correspond with Catholic lectionary readings that i see on the web. So we preach from both the gospels and the letters.

If you want to know more about one Catholic's attitude toward the crucifix, you might want to read this short article: http://bustedhalo.com/features/contemplating-the-crucifix

An addendum to the cross/crucifix bit: many denominations of Protestants take very seriously the commandment against making idols (although the Catholic intent is good; i.e. recalling the crucifixion, it's still worshiping/revering/venerating an idol).