The Patience of a Saint

Sister, can you recommend a saint to help my 9 year old daughter to have some friends at school? Or to help her follow God's will, if He doesn't want her to have a "best friend" right now? 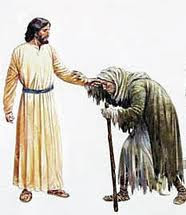 I can't imagine in my wildest imaginings that God wouldn't want a 9 year old girl to have friends at school.  Jesus, God's Son and the Second Person in the Holy Trinity, was all about having friends.  He was friends with people who no one on the planet wanted to visit.

Nine is a tough age.  The tricky thing is to somehow help her understand how to be a friend, to be open and loving and compassionate, and not to expect anything in return.  To let go of the hope of having a gaggle of friends or one or two close ones,  and to just let the cards fall way they may, happy in the knowledge that you've been the best person you can be.

And to not make her lack of friends her fault.

Here's a good thing to learn to do: Listen.

When people talk to her, tell her to listen carefully to what they are saying, and then, rather than comment on it, or try to offer advice, simply to say what they just said back to them in her own words.  Simply be compassionate to their feelings.  Lend an ear. Lend a hand.  The end.

People love a good listener.  When you repeat to them in your own words what they've just said, it lets them know they have actually been heard.  Who doesn't want that?

What she'll need is patience and a thick skin for all the times when she'll simply be ignored for all her good behavior.  I'm going with St. Rita.

This may seem like an odd choice, as St. Rita is the patron saint for not so hot marriages and infertility. But here's the deal, St. Rita always wanted to be a nun and the nuns just didn't want her.  At all.

But Rita never gave up and finally, angels came and flew her over the convent wall.  That got her in. You'd think that once angels flew you into the convent, the nuns there would snap to attention and welcome her into the fold.  They did not.

They gave her a task to demean her and to prove her mettle (!) and her obedience.  They stuck a stick in the ground and made her water it every day.  This went on for quite some time. And then one day the stick sprouted leaves and eventually grew into a tree. I think it's still there.  Maybe not. How long do trees live, anyhow?  I'll have to look that up. 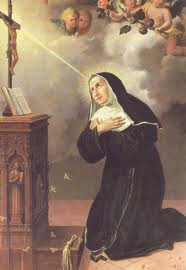 One would think that after angels flew you into a convent and a stick grew into a tree, that the nuns would finally want you as one of their own.  Nope.  Rita was never accepted into the community in a loving way, because she had been a wife and mother, and her husband and sons were all not nice people (as in, involved with Mafia types, not nice).  Back then, women who had been married and had children were not concerned nun material.

Finally, St. Rita received the stigmata, with a thorn in her forehead that festered and stank.  Finally, the nuns understood her holiness, but now, what with the stench and all, Rita had to spend the rest of her life in her cell by herself.  After she went to her Heavenly reward, her room began to smell of roses, and does to this day.

Patience and a thick skin.  St. Rita reached her goal.

I'm sure your daughter will not have to water any sticks or stink up her room.  But if she remains patient and compassionate, her loving nature will be rewarded.
Posted by Sister Mary Martha at 2:57 PM

Boy, I can really relate to this post. I am spiritually adopting this girl and will pray for her. I, too, had no friends when I was 9 - 10 - 11 - 12 - 13 - 14. Finally, when I was 15 I was able to make some friends. In fact, I became fairly popular. I thought I had licked the problem, whatever it was. I think the lack of friends made me act in a needy way whenever someone new came along, and the intensity scared them away. It's called "trying too hard." So 15, 16, and 17 were great years for me. When I left for college, I had to have FIVE going away parties because different circles of friends all wanted to say their good-byes. Then I went to college out of state. I could not make any friends. It was like being in 3rd grade all over again! What was it about me that people just didn't like? I don't know. I still don't know. I have had periods in my life when I've had a friend, but most of the time I do not. The last time I had a close friend was 1994. I moved to a different city for work, and have been unable to make any close friends here. I have several aquaintences. It really hit home when I had major heart surgery last year. I was out of work for three weeks. I work with over 50 people, and only TWO took the time to come see me in the hospital at a time in my life when I didn't know whether I would live or die. So basically, I just try to offer it up. I may not have many friends in this life, but I hope I am making several in the next by getting as many folks out of purgatory as I can. Another good saint would be Francis of Assisi. Part of his prayer mentions that it is better to love than to be loved. That really hits home. Just keep loving!
-Maggs

I am struggling with motivating myself - I need to finish writing a novel in a few weeks so I can graduate from school with my MFA. Any Saintly help???

SMM- can you give any info on milagros? And what does the church think of them? I was looking at the Heaven Help Us sidebar and was wondering about a patron saint of knees (mine are sore right now) and thought maybe a knee or leg milagro would be nice with a saint medal.

My friend is considering an abortion and I am desperately trying to stop her, but I need some help! What Saint would you recommend for abortion related prayers?

I have joined a rosary making group. Lately I have just made them solo, but I wanted to get involved at church. I am having problems with the name of the group. They call themselves, "Mary's Chain Gang" I am finding this very offensive to Our Lady....or is my skin too thin? There are not very many members and I believe this may be do to people not knowing what the group does....especially since the words rosary making isn't in the title. Before I moved to this city I was with a group called Joyful Rosary Makers and we were very active. Being new to the group I wonder if I should even tell them about my concerns. Also interesting enough this group makes cord mission rosaries and very few chain rosaries. Am I totally off base here?

I was also touched by this post because I can relate to it. I am 46 years old. I had no friends at school (my 9 years old daughter says she can't believe no one like it because I am perfect. Me too, can't find a good reason. I am not that bad). It is so strange it looks like a curse. Well, it still has effects on me. Just last night I had a bad dream about it. What I am trying to do is to convince myself that this must have been something given to me by God, so that I would not find it easy to "be in the world", and looked for him. But I also see that this for a long time made me mad at God. Only now am I trying to view things differently. I will pray all this turns her towards God and also that he gives her strength.

@ anonymous Christina,
you are in spiritual combat! Pray to St. Michael the Archangel. Jennifer Fulweiler recommends The War of Art by Simon Pressfield as a field guide to practical spiritual warfare, but I have not read it.

@Sylvie N,
You can't go wrong with Our Lady, in this case Our Lady of Sorrows. St. Raphael the Archangel has brought good news of unexpected pregnancy before.

Sister, thank you for your words about my daughter (the 9 year old). I'm sorry I wasn't able to comment before now. Your advice is very good, and much like what my mother used to tell me! (Is there some older lady advice blog you are all reading?) As I told my daughter, she does have friends, they're just not in her grade. Recently, she was sick, and missed school for a week. Her brother reported that many children asked when she was coming back, and a few of the girls wrote sweet notes to her! One thing is that the children in her grade are a bit of a challenge in terms of behavior, and a high percentage (within a small class) don't speak English at home. (Not that that need be a barrier. One of the girls who wrote her a letter is from Korea.) We will ask St. Rita's intercession. It's helpful to have a patron to affix the intention to.