I'm a bit behind on tackling questions.  I'll catch up. I always do! 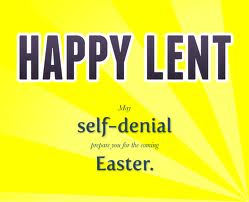 I don't think it is, but I always feel like saying that, I suppose because I love Lent.  It makes me feel good.  I feel like I'm making spiritual progress.

But I'm supposed to be suffering.

And I am suffering.

But then I feel good about it. Like running a marathon.  That must feel horrible.  But we know it feels great because of the accomplishment. And the endorphins.

I'll be interested in your answers.  No wonder saints went to such great lengths to beat themselves up. St. Rose of Lima made herself a spike hat.  She was a very crafty girl (as in Etsy, crafty, not sly and manipulative crafty).

Meanwhile, I can't resist this question, even though it's brand new and there are older questions to answer.

I have joined a rosary making group. Lately I have just made them solo, but I wanted to get involved at church. I am having problems with the name of the group. They call themselves, "Mary's Chain Gang" I am finding this very offensive to Our Lady....or is my skin too thin? There are not very many members and I believe this may be do to people not knowing what the group does....especially since the words rosary making isn't in the title. Before I moved to this city I was with a group called Joyful Rosary Makers and we were very active. Being new to the group I wonder if I should even tell them about my concerns. Also interesting enough this group makes cord mission rosaries and very few chain rosaries. Am I totally off base here?

A chain gang is a group of prisoners, chained together at the ankles, wearing striped prison garb, breaking rocks with sledge hammers and pick axes.  The purpose is twofold: to put the offender to hard labor, and to humiliate them while they serve their time.

One could argue that these people are criminals, but although chain gangs still exist, you really can't judge.  In the old days (which is where we get the term), the men on chain gangs might not have been guilty of anything more than being the wrong color in the wrong place.  Or stealing a loaf of bread because his family was starving.  Looking at the men on a chain gang, there would be no way to tell who was an innocent caught up in the system and who was a bank robber. 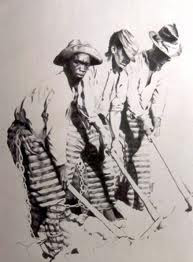 I don't think you'd find an actual psychopathic killer on a chain gang, because that guy would have just gotten hanged outright.

It's just a clever name.  Maybe it's just me. I'm chained to a bunch of people and I wear funny clothes, too.  Sometimes I feel like I'm breaking rocks with a sledge hammer.  Or pounding sand.

The one area where I might agree is that people don't know what the group is or does by the name.  They need a Facebook page or something.  If I were in a parish and I saw "Join Mary's Chain Gang!" in the church bulletin, I would be intrigued.  Maybe people just don't like making rosaries there.

I don't like working with beads myself.  I always drop them all over the floor at some point.

I should join a rosary making group during Lent!
Posted by Sister Mary Martha at 3:01 PM

St. Louis de Montfort suggested that people who made the Total Consecration to Jesus through Mary should wear "little chains" to remind themselves that they were "slaves" of Mary.

Do you suppose that plucking one's unibrow is generally considered an act of tidiness or vanity among nuns?

Hoping to become a Carmelite, even one with a unibrow

The entity with authority over a chain gang is an oppressor, whether legally in the right or not. Those on a chain gang tolerate the abuse because they have no choice (unless being physically abused to the point of death is a choice) Service for or to Mary is never oppressive. I know the rosary group is using a play on words which they consider clever, but I think they need to rethink it. Surely they can come up with another clever name which doesn't paint Mary as a violent unjust overseer.

The original rosary-making group (as far as I know) is the Rosary Army. They make the knotted rosaries with little metal crucifixes.

Sister go ahead and say Happy Lent! The church loves to speak in paradox, like oh happy sin of Adam. Give your life in order to save your life and so on. Further, when people say, what's so happy about it, you have a wonderful opportunity to share just why it is happy. Regarding your filet-o-fish conundrum: Why not have it on Sundays? The deal is for every day of the week. Why not treat someone to lunch of two filet-o-fish while you have a coffee and watch them, drooling, on a Friday, and them on Sunday eat some yourself, having a splendid little mini-Easter. Just not before receiving the Eucharist. So, Happy Lent, Sister!

I hate fish. (Okay, "Hate" is a little strong... so I strongly dislike fish!) I think I'll have me one of those sandwiches on Friday, though, to encourage McD to keep selling them. Otherwise, the next thing the government will be forcing us to do will be to eat meat on Fridays, and pay for our employees to eat hamburgers all through Lent - if you know what I'm sayin...

I agree with the questioner. I think the name is offensive and disrespectful.

Oddly, I don't like the sound of Mary's Chain Gang because of the disrespect it implies for the unrighteous suffering that happened in the past. I feel that I would be likening the terms served by the men in your picture to the joyful community I'm sharing with friends on a beloved task. I belong to a cultural group with a long history of oppressing others and then using admiration for "how well they bear up under it" as a way to lessen the need to stop the oppression. I don't think it's cute.