Sister, Who is the appropriate patron saint for teachers who are tiny and diminutive compared to their large high school students and are scared of mutiny? Thanks, and many blessings! 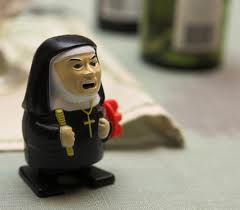 You don't need a patron saint. You need a habit. Everyone is afraid of a nun in a habit. Young and old, large and small. People are so afraid of nuns, either that one is going to crack them with a ruler or simply that they might say something inappropriate of offensive, that they just shut up.

That makes for an orderly classroom.

Anyone from the dog whisperer to those TV nannies will tell you that the key to discipline is follow through. No empty threats must pass your lips.  If you tell them they must be quiet and they are not, you have to kick them out or send them to the principle one by one and two by two until you are left with no one.

A student is talking to another student. "Bob!" you say to the talker in a calm voice.  "Go sit over there."

"I'm not going to discuss this with you. Go sit over there."

Bob moves.  After ten minutes, tell Bob he can go back to his usual seat.

Discipline is not about size. It is about discipline. Your own.

The teacher I most feared in grade school was about 4'2". Granted she was a nun and,  as if that wasn't enough, she had a face that could stop a train. Like an old witch, really, where the nose and chin look as though they are about to meet at some  point in not so distant the future. So she had all that going for her, too. We had over 50 children in our classroom. No one dared misbehave. Or  misspeel misspell anything.

We don't really want our students to fear us. Not really. We want to create an atmosphere of mutual respect.  That can't happen without discipline. 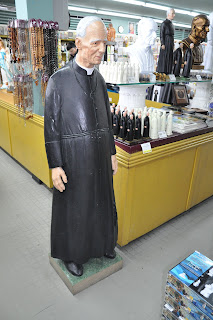 I'll get off the soapbox atop my high horse now and recommend the newly minted saint, St. Andre of Montreal.  He was teeny.  Under five feet.  His job was behind the reception desk there at the monastery.  It could be he had to face some scary types there behind the counter.  Or not.

He was a little nothing of a nobody little man.  But he thought there should be a giant Oratory built to honor St. Joseph and he put his little mind to that. The St. Joseph's Oratory in Montreal literally looks like you've reached the top of the beanstalk and found where the giant lives, magic harp and magic chicken and all. Brother Andre did that through the sheer power of his will and prayer.

Sister, I laughed out loud: You need a habit! Soooo funny, and true!

I do think effective teachers can make students fear and love them all at the same time. I don't have a habit, but I can play the "grandmother" card.

Today's saint is St. Nicholas of Tolentine. (Not sure which king was the "foot standard" in the mid-eleventh century, though, so my answer is not in feet...sorry)

Or better yet, another source lists St. Thomas of Villanova, who was apparently the archetype of the absent-minded professor. (That would be me! I rather like him...)

Sister....I am THRILLED to find your blog. I am the result of Dominicans and have been teaching since I was 20....and I am still going at 73. May I please add one thing to your list....using a fingernail file to scrape off any day student who was brazen enough to wear lipstick to school. Those of us boarders knew better; the alternative was into the chapel on our knees. Fortunately, there were far more loving and caring nuns there than the "mean" ones. Another good side of the coin is without my dear Sister Rose Brendan at Rosarian Academy I would not be the person I am today. In me instilled a work ethic and love of my fellow man that has carried me through the years. She is buried at the Mother House in Adrian, and it is my dream to go to her gravesite before I join her in Heaven....I hope. genie

Well, your teacher would be disappointed that you used the word principle when you meant to write principal! But the post was funny anyway - thank you.