Please and Thank You 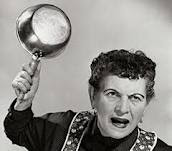 Dear Sister, I'm a little new to learning about the Saints, so I'm hoping you can direct me here...is there a patron saint for unappreciated homemakers? (I thought that sounded better than "Who should I pray to when I want to throttle my husband?") I'm trying SO hard to be a loving, gentle, *sigh* obedient wife and mother, but it sure isn't easy when I feel taken for granted all the time. Thanks for any guidance you can give me.

You don't need a patron saint. You need a cast iron skillet. Hide behind the door and clong him with it.

I'm joking.  Although everyone should have a cast iron skillet. It's great for both cooking and attractive biceps.

I have two recommendations. The first is St. Zita, who is the patron saint of homemakers. Little Zita was a maid (so right there, you should feel a kinship).  She was actually greatly appreciated as such, but her boss didn't care for her giving out bread to beggars at the back door and running off to Mass everyday. At one point he told her she couldn't go to Mass until her work was done. She went anyhow, with the bread unbaked and the kitchen uncleaned. When she returned everything was done. 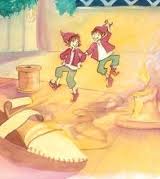 The angels did it. Kind of like the shoemaker and the elves.  Wouldn't that be the best thing in the world? To come back expecting your messy house and all that work to do to clean and tidy up and make dinner and find it all sparkling and clean and dinner in the oven?

Perhaps you should just pick up a copy of The Shoemaker and the Elves and sit around in front of your husband and cry every time you reach the end and all the shoes are made. Eventually he'll want to know why you're crying and you can explain.

There's a word for this type of behavior: passive aggressive.

Or you can man up, as they say, and sit that fellow down and have a frank talk with him.

I believe when people do this they tend to approach it the wrong way. They approach these things in an accusatory fashion, "You make me feel terrible and unappreciated all the time."  Have you ever noticed that when you accuse someone of something, even if they are actually 100% guilty, their first response is, "No...that's not what happened", or something to that effect? When people are accused they go on the defensive, even if a couple of moments later they realize you are correct. 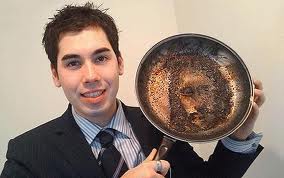 I propose that you take a tip from people who handle interventions. They actually don't talk about the other person, exactly. It's the first step in understanding that you are not responsible for their actions or reactions.  What they do is talk about how much they love the person, how valuable the person is to them in their lives. Then they talk about how the person's behavior--the behavior--is impacting them. There is a clear distinction between the behavior and the person. Jesus understood this very, very well.

That's my suggestion to you. Tell your husband how much you love and appreciate him. But explain to him that you aren't feeling that from him and it's making you feel bad and it's making your work as a homemaker into difficult drudgery.  Tell him you're willing to tell him thank you a lot more often. Ask him if he'll do the same for you.

The angels won't do it for you. But they will be there to help.
Posted by Sister Mary Martha at 1:04 PM

I just want to say that I love your use of the "clong." Very onomatopoetic. I think I will work it into my everyday vocabulary.

Do you know a patron saint I can invoke for strength and perseverance and against being discouraged? My house and most of my hometown were just flooded by a hurricane. On a less drastic note, I'm struggling to complete my master's thesis, and it feels like I'll never finish.

"The angels did it." Sister Mary Martha is on a roll, YES! And should you not know the proper etiquette on how to treat Angels here is a trusty scripture to start with. Psalm 103:20 "Bless the Lord, ye his angels, that excel in strength, that do his commandments, hearkening unto the voice of his word." Again I agree with our Sister that reading "The Shoemaker and the Elves" may very well help all involved, some times an example like this can be read by others. I have experienced the least of the choice "suffer cheerfully" and I suggest not, but then I am not judge. The Guardian Angels that secretly protected Saint Zita's loss of responsibility would NOT have helped her had she *chosen *the *same choice, and yes I get the small joke in this choice. Actually rather then "man up" which is to me less likely to serve as an example I would trust the Angels, but then I am a man and not a woman. Often times the Angels will help sooner then a person, the example of book reading is seen by both, an Angel will see you reading and get it's meaning sooner. It is an old lesson that between two close points, I am lately calling it "response time," an Angel's response time is shorter. So to speak, between your Guardian Angel and your Husband, what is the shortest way getting there :) Just make sure there are no children's toys on the floor between 'here and there' to stumble over :) Speed is no longer an issue as in a choice "suffer cheerfully" but at the same time any choice is no slower, no roller skates or marbles laying about 'on route' :) Sister, I will look in your eStore for a Saint Zita medal, I have some bad neighbors, hee hee. "He hath not dealt with us after our sins; nor rewarded us according to our iniquities. For as the heaven is high above the earth, so great is his mercy toward them that fear him. As far as the east is from the west, so far hath he removed our transgressions from us." ( Psalm 103:10-12 )

Anonymous, you may do well to look into the methods that FLYLady teaches (www.flylady.net)
It seems hooey to many that you need instruction on how to clean your house. Which this site is not that. To paraphrase what she says: "most of you know HOW to clean, it's just your perfectionism getting in the way of you doing it" In fact, it's more of coaching and guiding you to a different way of thinking, and dealing with others.

As for the patron saint...maybe St Anthony for the time being, because you feel like you have no hope of reclaiming your home, or completing that degree.

Thanks Sister! As always, your advice is spot on and I learn so much while I'm laughing out loud, too! Today's a new day and I'm feeling cheerful, I've got an angel on one side, St. Zita on the other, my copy of The Shoemaker and the Elves tucked under my arm, and a back-up skillet in the cupboard, just in case. Clong! Just kidding. :)

Sister, Who is the appropriate patron saint for teachers who are tiny and diminutive compared to their large high school students and are scared of mutiny?

Thanks, and many blessings!

Oh, and Alaska Mommy, should God decide that you deserve a beautiful Angel but an Angel without a name, the Catholics will refuse telling you this but it's choice to be named is yours. Give it a name without fear. While naming it think of it's beauty, what color are it's wings?

Anonymous, are you a new young teacher? I was, once, a long time ago.

Over time I've learned that no matter how much bigger the kids are than me (and all of them are!), I still know a lot more than they do, so they have to respect me. I use my "voice of authority" and they respond very well. (Or maybe it's because I taught their parents...or that I look like their grandmother...)

I've also found that respect is a two-way street. If I expect them to respect me, I need to respect and love them! Once they believe that you do, things get a lot easier.

I don't have a patron saint to suggest, but I will certainly pray for you! It gets easier the more experience you have.

So funny and so sensible!
It's kind of related, but I have to go stay with my cousin who is seriously ill. We've always been close - more like brother and sister. But the problem is with his wife. If I was charitable, I'd say she was "shy" (that's what my mother says. She is a good woman). I'm less charitable, I'd say she was unfriendly to her husband's family. She can't compromise on anything - it's all right or all wrong (mostly wrong!) and once she makes up her mind, that's it. However crazy, she sticks to her guns and won't budge. I am happy to help my cousin but I am really worried about coping with his wife while I'm there. And I am only staying with them so that she can keep going to work while he's ill and doesn't have to take unpaid leave. Any advice on being nice and keeping the peace, please?

I love your blog, and I need some advice. My best friend and I have been friends for 19 years now. Recently, I discovered that she betrayed me by sleeping with my boyfriend. I forgave them, but this is hurting me a lot. My question is, how do I get over this betrayal? Thank you!

I love this blog :D

I have a question as well--I work as a story person (writer & story artist) and I'm trying to pull together blogs that have the basic principles in their storywork of creation, learning, & teaching.

I'd like to draw an illustration for blog sidebars in a "Secret of Kells" style. Is there a patron saint you would recommend that's very story & creation-centric to draw? (I hope this question isn't dumb)

Jesus in the cast- iron skillet was the perfect find for this post!

"very story & creation-centric to draw?..."
Heather Dixon, that is not a stupid or dumb question but I suspect you all ready have your answer ...because... all Catholic Artists are hung up on playing with all various Catholic Icons in their picture looks. "Line upon line, precept upon precept, once you have grasped the truth of any topic you will find that explaining it can even become very child like in that it becomes silly. If you need proof, it may happen soon. Here is how, study the Canonizing for Saint Kateri Tekakwitha and watch how the pictures in the rack at the back of the Curch and in Christian stores racks change in even a short time, ha ha! An other example if you can find it, find an old picture of a Pagan Angel Rafael as it was originally depicted, now find the same Angel after it was accepted by Catholics. The earlier will remind you of child's scribble, yet it may be an exact picture, more accurate in every detail, the Catholic Artist will make the more recent Angel Rafael glorious, radiant, colorful, to the extent you want to eat the Icon card including the gold or silver around it. Yum yum!