Over the weekend, while Sister St. Aloysius finished up some Halloween costumes, I stumbled across an interesting take on St. Jude.

Sunday was the feast day of St. Jude and St. Simon, two of the apostles. We know almost nothing about either of them.

We don't worry too much about that in the Catholic church. We honor the saints and make up things about them based on what little we know. Don't get yourself worked into a lather because I said we make up things. We made up names for Mary's parents and for the Three Kings, for example. 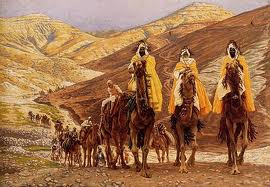 I never worry about it. It's okay with me that we honor St. Anne. And St. Joachim. Certainly Mary HAD parents. Joachim and Anne? Fine with me.

Sister St. Aloysius has a special affinity to St. Anne at this time of year. St. Anne is the patron saint of seamstresses. But then, we have no idea if St. Anne ever sewed much of anything. I imagine everyone who lived in those days had to be handy with a needle.  Anne couldn't run out to Macy's or Walmart for a new tunic.

But we don't even have "legends" about poor St. Jude. We believe his name was Judas Thaddeus and after Judas Iscariot went off the rails, Judas Thaddeus became Jude. Who can blame him? That's it. That's the extent of our knowledge.

So it has been my understanding that St. Jude became the patron saint of impossible causes because everyone figured that he was rather neglected, that very few people would think to pray for his intercession, and that would give him time to take on the really hard stuff.

Now, don't get your hair on fire about St. Jude having time in Heaven where there is no time. It's just the way people think. It doesn't make it deep theology. Or true. 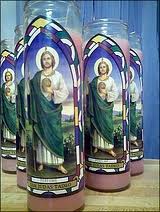 I enjoyed reading about how little we know about St. Jude.  Then this jumped out at me. A fresh take on why St. Jude is the patron saint of impossible causes!  Try this one on for size!

The non story about St. Jude shows us that the impossible can happen, when a completely obscure man can become so wildly famous. Even non-saint-savvy folks are familiar with St. Jude, even though technically, there is nothing with which to be familiar.

Works for me either way!

St. Simon doesn't seem to have been similarly blessed. But then he didn't have Danny Thomas.
Posted by Sister Mary Martha at 12:56 PM

I happen to call St. Jude my patron saint... impossible? We've dealt with that here! It's St. Lawrence--and goodness knows, I've been teased I could use both, particularly after celebrating Ash Wednesday by accidentally setting my kitchen ablaze one year. So I work with both! :)

Except that Catholics follow both Scripture and Tradition, knowing that not everything is in the Bible, so there's no reason not to believe the names attached to The Blessed Virgin Mary's parents or to the Three Wise men.

One of my confirmation students once asked if he could choose a woman as his saint. I replied, "Yes, it's OK if you do that, but it's unusual. Who are you thinking of choosing?"

Sister,
Is there a patron saint for eating disorders?