Down the Dark Alley 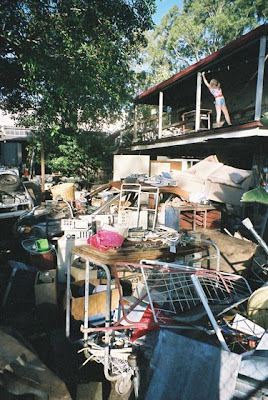 Sister St. Aloysius will have to look for new opportunities to suffer, as her arm is on the mend. A few days ago her doctor changed her big clunky all the way around the elbow cast to a streamlined light weight job that only goes from her hand to her elbow. What a shame, as that happened the day before Lent began and not being able to straighten her arm was driving her around the bend.

A shame for me as well, since I loved taking her on alley walks while she had that big clunker on.

To begin with you get to see the backside of everyone's life. The tidy garage, the hillbilly garage, the beautiful yard, the falling down back fence, the grill, the Big Wheels, the cars on blocks, all a snapshot of life as we know it.

Back there we get an insight into who is really persnickety, who is a big slob and who is just a person with not enough time to take care of every detail of a hunk of property back in the corners no one else sees.

No one but me and Sister St. Aloysius, the alley walkers.

But I am such a learned alley walker, I know where to walk in the alley so that I don't get run over. You walk in the middle of the alley in the middle of the alley and the far sides of the alley when you are on either end of it. That way when someone comes zooming into the alley they don't hit you, but in the middle there they can see you and slow down. I am actually a bit paranoid about being run over since my mother's amazing colossal accident a few years back. Did I ever tell you about that? She came out relatively unscathed, but the car was totaled. Remind me to tell you that story sometime. You should see me scooting around parking lots trying to avoid being behind anyone with their brake lights on. On lookers must wonder if someone is secretly giving me electric shocks from afar.

I have been cautioned numerous times, that it is dangerous for me to walk in the alley, as I also do it at night. "Pish posh," I say. It's not as though I'm out there at 3 AM.

The best part about the giant heavy cast was that I could just tell everyone not to worry about the alley walking, because if anything happened, Sister St. Aloysius could just clunk robbers in the head with it and we would run away.

So I've given up alleys (among other things) for Lent.

By the time Lent is over, and our backyards of the soul have been all straightened up, Sister St. Aloysius' arm will be all better and she will be able to do her kung -fu jujitzu on any potential attackers once more.
Posted by Sister Mary Martha at 10:41 AM

I had to send this along to fan the flames of the dogs in heaven debate. It's a Catholic church having a disagreement with a neighboring Presbyterian church via church signs.
Check it out.

I've seen that video before. STINKIN' HILARIOUS! I wonder how all that insurance paperwork looked. Hit and run? No, walk and run, with a bag.I learned from my father (the nice way) not to ire thy elders. I can only HOPE this guy learned the hard way, and it only took once. Otherwise we just have to wait for that adage "what goes around comes around" to bite him in the backside.

Will make a "Praying Sister Mary Martha" for you next Friday with the blob of dough for a head and everything! :)

Thanks for the link, Katy. I've been in stitches all afternoon. Glad y'all are having more hijinks, Sisters. I am envisioning Sister St. Aloysius in a 'Matrix' movie now. Happy Lent!

It's very funny!-reminds me of a similar bit of bantering in Sydney between a church and a pub on the other side of the road...... since we are now in Lent, could you explain "Ember Days"? I have mever heard of them!

What an interesting blog you have ! Thanks so much I am really looking forward to visiting again .

That's a funny video, but I do believe it's a put-on. The most glaring thing is that a knock on the bumper won't set off an airbag. Were that the case everybody in L.A. would be replacing their airbags just from parking knocks. Airbags are set off by a crash sensor, located often near the transmission, that goes off when there is a collision force equal to the car running into a brick wall at 10-15 mph. They literally explode, with a tremendous BANG. But the video was very well made--they should be film-makers... maybe they are!

That video is amazing, but I´m sorry to say that it´s made by the swedish comedians Måns Nilsson and Valdemar Westesson and payed for by Ikea.

If you can read swedish there´s an article here in a newspaper about her and that little movie.