Get Thee to a Cannery 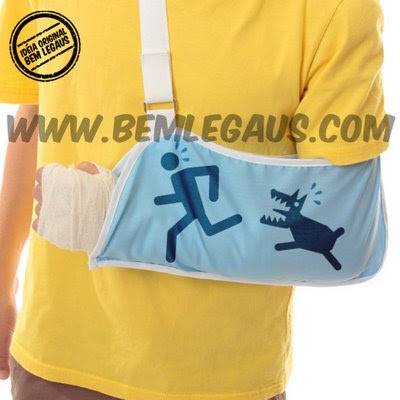 What can I do to convince Sister St. Aloysius that starting a 'write in' campaign is not the best project to begin when the arm you write with is broken in three places and held together with plates and pins? (Great sling, yes? Click the picture for more.)

She is undaunted. I have had to rewrite her letters for her, which means I have to decipher what she tried to scratch out with her devil arm.

Maybe our readers can help.

For reasons no one can fathom, the Oxford Junior Dictionary has taken out the words "nun", "saint", and "bishop". (There were a few others. Although, they also took out "nunnery" and I am happy to see that one go. I never cared for that word. It sounds too much like 'cannery' and it makes me feel like a sardine that got packaged and shipped.)

Sister St. Aloysius has decided to protest. I agree. It's not as though any of these words are remotely out of use, unless we've decided to change the names of some cities to "Paul" and "Charles" and "Louis". The Louis Arch. It just doesn't have the same ring to it.

I'm not sure how one will refer to that certain now nameless chess piece. I wonder if 'rook' is still in the Oxford Junior Dictionary. I hope so. I don't have any idea what a rook actually is and I'll need to look that up in a dictionary to find out.

They've added some words, like "MP3 player". I'm glad they did that because I can never remember what that is and I have to re-ask the same 6th grader over and over again. Now I can just look it up.

I'm all for this write in campaign. I'd rather just show up at the offices of the Oxford Junior Dictionary editorial board with as many ______s as I can gather and ask them what we're called, since they have taken away the word for us. I could bring some children to open and close their mouths as they try to identify us to further emphasize the problem they have created.

We could set up chess boards with games that can never be completed because of the missing pieces. We could do this under the Louis Arch.

But I don't have that kind of money to get myself over to England.

So please write to the Oxford Dictionary people on our behalf and tell your friends. Take pictures of your children attempting to play chess with no bishop under the Louis Arch. Write to Tony Shalloub. This has to bother him as well.

It's too late for this year, but like the Catholic Church, we are willing to forgive the penitent sinner. Is sinner still in there? I hope not. Not without a saint to help out.
Posted by Sister Mary Martha at 12:23 PM

The bad news: This dictionary "update" just might be the dumbest thing I ever heard. Kids already know what MP3 players are, but I doubt they could name their local bishop.

The good news: You are my hero for mentioning both my current home (Louis, MO) and one of my favorite tv shows. Keep up the great work!

Now isn't this a fine kettle of fish, i.e. sardines and/or nuns! I did not know such words would be edited out of a dictionary! The United Methodist Church has a Bishop for every division of the conference. Wonder what we'll call them now. When someone exclaims "Saints be praised" how can children check that meaning? Tisk, tisk, tisk!

A rook is a bird, true--kind of a relative to a crow or a raven. Though there must be some other meaning since the rook in any chess set I have ever seen looks more like a castle.

A rookery is where certain noisy seabirds or birds that live near the sea settle to drop bird poop along rocky cliffs--I think that puffins live in rookeries, or is it seagulls--no seagulls live out by the garbage dump along with the bald eagles--come to think of it, seals can live in rookeries, too. But, seals are mammals. When they lie out in the sun on slippery rocks in the sea, are they taking over the breeding places of seabirds?

Well, if that don't beat all. What is the Oxford rationale for removing those words from the lexicon? Does that begin the process to eliminate the saints, nuns, and bishops from society, by removing the word from the dictionary? Or, the concept of the word meanings too mature for a mere junior dictionary? Or, perhaps, because there are so many nuns, bishops as well as saints, in England--there is no need to define a word that everyone can identify. No, I'm sure that there are many silly other words that everyone knows in junior dictionary.

well London already has the highest concentration of CCTV cameras in the world and I see they have begun their newspeak campaign by removing words from the dictionary, starting with our budding junior spies no doubt. please tell oxford to remind me when new openings are available at the ministry of love.

I think the powers that be in the world are trying to eliminate any reference to Christian religion. Christianity is the only religion it is permisable to discrimiate against, or so it seems to me. Maybe a few others have noticed this new trend.

As always, you make me smile and giggle every time I go to your blog! Thank you Sister!

That is ridiculas. I agree the powers that be are trying to remove christianity. We must fight this.

"Get thee to a nunnery" continues to be used on occasion, either in reference to the actual quote, or merely as a joke...but still!

Are there perhaps some nuns in a nunnery in England that you can contact to protest in person on your behalf?

Instead of a sister city in England, maybe you could find some sister sisters!

Maybe the Oxford dictionary is having financial problems and had to limit the number of pages due to budget cuts!

As someone who used to work for the Modern Language Association, I'm sure they're appalled. Bet they'll even give this matter some face time in their scholarly publication.

Off to write the dictionary people!

Thanks for this blog, Sister! I am an American mom living in London, UK, unfortunately, the omissions in the dictionary are just a small sign of all the Catholic faithful omissions that are evident in England, very sad.

I've been reading about dictionary updates for a few years now, and this one takes the cake!
I looked it up and apparently they removed over 100 words, most of them referring to flora and fauna (I wonder if those two words are still in there?)
such as: beaver, gerbil, goldfish, melon, hazelnut, prune, apricot and ivy!!

Bishops are chess pieces, too, so you can remove those in your protest as well.

Do you have an address for us to send letters to?

From the online etymology dictionary

This is outrageous! I'm still shocked from my crazy morning, so I am re-reading to see if I've missed something... and yet... there it is... what next, take Jesus out of the Bible?
aye yi yi ...

When I go to Louis this summer I'll be sure to tell my high schoolers that the Louis arch was there.

Oh, my. When will the silliness cease?

Please mind the Christian arrogance - it's not all about us. "Nun" is a word used to describe a woman who belongs to a religious order or service (check with your local Buddhist temple...), it is also the 14th letter of the Hebrew alphabet.

If its true that these words have been removed from the dictionary, the omission of words like these that have been so strongly assimilated in to the English language is more of a poor decision in editing rather than an anti-Christian conspiracy.

I see from their example page on their website that they've included the word "Angel - a messenger sent by God" (notice that capital "G"?).

In our rush to condemn or complain, remember there are such things as poor choices. Perhaps the Oxford Junior Dictionary just isn't that good of a reference book.