The More Things Change the More They Change 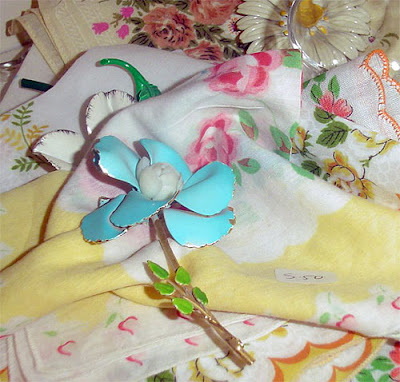 There is a smell. Not a bad smell.

But not a good one. It is oddly familiar. I couldn't quite put my finger on it. A kind of sickly sweet smell. At the same moment that I figured out from whence it was emanating, I also nailed down the sad familiarity. We bought some new garbage bags. They are scented.

And that smell...old lady perfume. Granny hankies dipped in what used to be called 'toilet water'. Seriously, why would anyone put that on? The name ought to be a big hint that the scent is not going to go over very well.

I'll be offering this one up for the Poor Souls in Purgatory for months to come. We are so good at recycling that we only use one garbage bag per week. The box holds sixty bags.

Meanwhile, I was happy to get this question after we discussed Father Juniper Serra the other day.

Was it always two miracles or was it three at one point?! I could be wrong- two miracles is quite something, considering, as you said, who is going to pray to someone for their intercession anyway if they are not already a saint! Very informative post- thanks!

You are one hundred per cent correct! And then...not really.

The third miracle rule was more like the 'and heir and a spare' mentality of a monarchy. 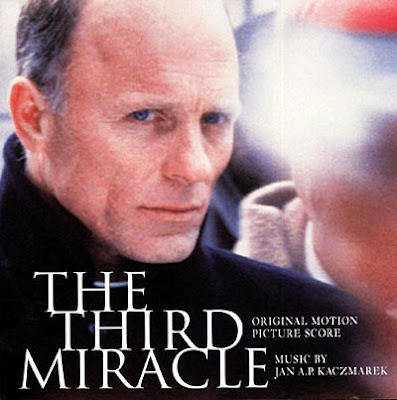 The Church was always happy with two miracles, but went for the third miracle to seal the deal. There is actually a movie called "The Third Miracle". It stars, Ed Harris, who reminds me so much of my brother, they could be brothers.

As movies go, it actually is a useful lesson in how the Church works at determining sainthood. Ed Harris, my pretend brother, is from the Congregation for the Causes of Saints. He comes to town to interview people who knew the saint candidate and to investigate the alleged third miracle.

I don't remember all the details. There were Nazi's in it. The third miracle was that the saint had caused bombs that were falling on a village not to drop. She wasn't dead and in heaven at the time. She was a little girl...I think. Ed Harris couldn't find anyone living who had witnessed the event. And the almost-a-saint needed that third miracle. There had since been two miraculous cures. Or maybe it was one miraculous cure and a bleeding statue. I don't quite remember.

But...and here is where the plot really thickened...there was one person living that had witnessed the event, but no one knew he had been there. It turned out that the priest assigned to be the Devil's Advocate on the case had been a young Nazi at the time and didn't want anyone to know his ugly past and so was blocking the whole sainthood thing to hide his own shame.

It's a movie, folks.

That was something else in that film that has been dumped by the wayside. Not only did the Church drop the third miracle requirement (it is only two now), the Church also dropped the "Devil's Advocate".

This was a move by Pope John Paul II, who canonized more saints than any Pope in history.

Of course he did! He dropped the Devil's Advocate and the third miracle!

The Devil's Advocate was a person assigned to argue against the cause for sainthood of the person in question. As the Devil's Advocate, it would be your job to refute any and all 'evidence', from deeds of heroic virtue to supposed miracles.

I have to say, I am still sorry to see the Devil's Advocate go. There should be vigorous debate. I assume there still is, but it just seems more efficient to me to have someone whose whole job is to defend the anti sainthood cause. After all, we have a whole "Congregation for Causes of Saints", we ought to have at least one "person against the Causes of Saints".

I'm sure the job was not a pleasant one. It's never any fun to be the wet blanket on everyone's saint party. Still, we must do what we must do. 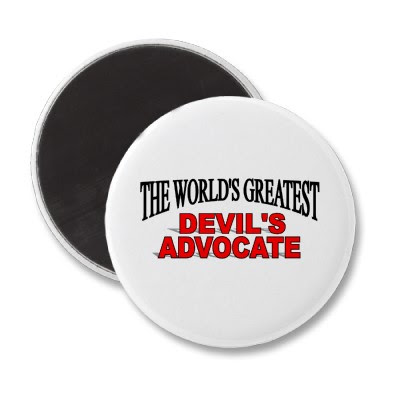 Anyhow, as remarkable as the" stopping bombs from falling" miracle was, I don't think it would actually count as the third miracle. I believe any miracles for the cause of sainthood had to occur after the person is dead. That's the whole point of having the miracles, to prove that the person is in heaven.

The devil is very tricky, but he doesn't go around doing good deeds. Miracles come from heaven. I have to be dead and in heaven to be a saint and the only way to prove that I'm in heaven (because proving I am dead will be a snap) is to have a miracle based on my intercession.

So I don't think that bomb falling would count, even though it actually was a miracle.

If you really want to get the inside scoop on saint makers, check out that book I've had sitting over there in my sidebar for months on end. "My Cousin the Saint" is a very good book anyhow, and a tutorial on the whole process.
Posted by Sister Mary Martha at 10:22 AM

Email ThisBlogThis!Share to TwitterShare to FacebookShare to Pinterest
Labels: My Cousin the Saint

I think if the smell is bothering you that badly you should donate the new box of bags to the thrift store. For that act of kindness you should get a few souls on their way out of purgatory. What bothers me are the little cards of perfume that are inserted in the local department store ads. I solved that problem by placing them in the bottom of my cat litter boxes. Wonder what Calvin Klein would think about that?

You will save everyone's nostrils at your abode. I can not use scented things because my nose will start running and sneezing.

Bless your Heart. I don't wear perfume but I clean a jewelry store and everyone who works there wears it liberally. I thought I offered up everything but this one slipped past. The smell is overpowering. I'll offer this one up, too. Thanks for the nudge:)

I have two words for you: Moth Balls. Chuck a couple in your garbage bags and I can promise you that you won't smell the old lady hanky smell anymore!
I spend rather a lot of tiime making lace to decorate these hankies - but I am too tired to take a pinch of umbrage, I have a sick husband to deal with.

I would have to second SMM suggestion of My Cousin The Saint. After seeing it on her site I purchased the book. It was a very interesting read, and helped me to better understand the whole saint process.

I think I caught a glimpse out of the corner of my eye a few weeks ago something about a saint for the Scatty. I have a VERY absent minded son who needs a special patron to help him get through school, and I think I saw this on your website but can't find it now. Would you mind repeating the information? I would be very grateful. Thanks, and have a great weekend!

You might try clipping rosemary from your garden to put in the bottom of the trash can. I hate those scented bags as well.

Sister, that's impressive and a good example to only use one garbage bag a week! But could I ask what size bag???

As always, love the information and the presentation, and the kindness underlying its expression.

If they ever decide to bring the DA gig back, I'm their girl. I would LOVE that job!

As long as everyone is giving advice on masking the smell, I'll give it a shot. Maybe you could by a can of that deodorizer that actually eliminates smells. It has some chemical in it that actually absorbs the odors and takes them away, so I imagine it would also take away the oder of the scented bags. Just sprinkle or spray a little into the bag when you replace it with a new one. Heck, it might even take away some the smell of the garbage. Double bonus!

Very interesting post on the miracles requirement. I was still under the impression that three were needed. I always wondered why some people were put on the "fast track" to sainthood (I think JPII and Mother Therese were/are on the fast track). That makes me sad for those on the slow track...doesn't seem fair. :-(

What do you think about the entire Catonsville, MD Episcopalian convent converting to RC? You are probably thrilled, but as an Anglican, I'm quite upset.

I thought two of them remained Anglican.
I'm sorry you are upset, but I think the sisters stated it quiet well when they said they could no longer support the liberal agenda in the Anglican church.

Their departure, which the sisters said they had been considering for years, comes weeks after voters at the Episcopal General Convention declared homosexuals eligible for any ordained ministry within the church and began writing prayers to bless gay unions.

"As we interpret Scripture, it does not give you license to be actively involved in a same-sex relationship," said Christie, who became a nun in 1966. "It is not the person we have a problem with. It is what that person is doing. And now that the Episcopal Church has given permission to bless these partnerships, it is way off the boat."