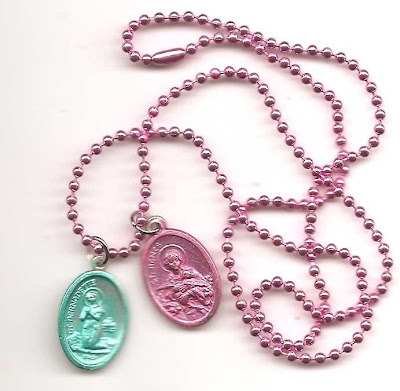 Not very long ago a fellow etsy shop owner contacted me about her daughter who had lost all her hair at age five due to an autoimmune disease. The doctors told her it would take years to grow back and she was looking for a patron saint matching to help the little girl cope with what was ahead for her.

I suggested St. Bernadette who got no heavenly help for herself, but was able to bring healing to others and St. Agnes, who had some miraculous hair growth of her own.

I was trumped by Heaven. Merry Christmas, everyone!

I wanted to touch base with you and give you a follow up on my daughter's situation. She's the one with hair loss due to Alopecia, for whom you made the necklace with St. Agnes and company.

On Nov.3 I was listening to Catholic radio while going about my household chores. NO less than 3 times I heard someone mention Sacrament of the Sick. I got the message (do not ask me why I hadn't thought of that wonderful sacrament earlier on, I do not have a good reason.) Anyhow, I called my church that afternoon and they told me it would be easiest just to grab one of the Priests at morning mass the next day.

I took my daughter to church and one of our wonderful Priests anointed her and provided the sacrament just before Mass. It was the feast day of St. Charles Borromeo and they talked a great deal about him during Mass---at which point I was moved to tears as they mentioned that one of his patronages is Skin Disorders---a category my daughter's illness also falls into.

Four days later, little white hairs sprouted all over her head. I called the doctor to confirm what I already suspected, it was re-growth. Not only did he confirm it, he was dumb-founded for an explanation (he had previously told us that with her "pattern" of illness it could take 2 years for re-growth to occur.) It has now been over six weeks and it is coming in at a tremendously quick rate, further stumping the doc!

This sweet girl of mine is now praying every night for God to help every one else in the world with Alopecia the way He helped her. (This was spontaneous on her end.)


I thought you might wonder what happens to some of the people you assist, and in this case, its a miracle. Merry Christmas, Amy

Merry Christmas, Sister! I hope you and yours will find the Christ Child entering into your hearts in an especially profound way this Christmas.

I love hearing about miracles. they happen more often tht we think. thank you for sharing Sister. I too am interested in the artist of the picture in your previous post. the Sister hugging a student perhaps. Merry Christmas.

Good Morning Sister
That is a wonderful story, really heartwarming and faith affirming. Thank you for posting it and thank you for a terrific blog. God bless you and a Happy Christmas to you, to Amy, and to the little girl.

Praise the Lord! What a beautiful story!


Praise be to God for new hair and deep faith.

Merry Christmas, Sister, on this second day of the twelve days of Christmas, which is also the Feast of St. Stephen. We do have a lot going on this time of year!

The story about the little girl with alopecia and her miracle made me so happy, and even happier to hear how she is praying for others with alopecia. I had a chat with St. Charles Borromeo myself a few minutes ago.

But I was also catching up on your other recent posts and agree with you that we must love Nan cy Grace, but it isn't easy to like what she says. Anyway, I went back to your 2007 post about Nancy Grace, which was written when you were about to have jury duty.

In the comments, a Muslim named Amjad asked several questions about our faith. Other commenters answered several but not this one:

2-you can see here in this verse :"24The Son of Man will go just as it is written about him. But woe to that man who betrays the Son of Man! It would be better for him if he had not been born."matthew 26:24

donot u think Jesus should had said "paradise or praise to the man who betrays the son of man instead of woe!"?

How would you answer this question about Judas? I think that Jesus said it would be better for Judas if he had never been born because He knew that Judas chose to betray Jesus of his free will, not because God preordained that he would. So, although Jesus knew that He would die for us, He also recognized Judas as His betrayer and knew Judas made that choice. I think that all that was predestined was that Jesus would die for our sins and that all those involved in His death did so of their own free will.

Am I right? I will try to find the answer myself but I thought it was an interesting question and I can't remember if I ever was told the answer. You know how it is when our minds are overly full due to our age, some of our knowledge falls out to let new things in.

I was a teacher, by the way, and don't you love it when a student asks you something you don't know the answer to, something you'd never thought to ask in school? I'd always get excited and tell them it was a really good question and I would try to find out the answer. "By your students you'll be taught" is so true.

Sister Mary Martha I found your blog by accident but I was looking for the answer to this question maybe you can enlighten me. I was wondering if praying a novena in the state of mortal sin works? Or is the novena prayer simply completely ignored?

That story brought tears to my eyes. God is so good. No problem is too big or too small that we can't bring it to Him.

Hi Sister. I was wondering what type of necklace she was talking about when she said "She's the one with hair loss due to Alopecia, for whom you made the necklace with St. Agnes and company." What type of necklace was it? I have hair loss and I have tried everything and am looking for desperate help. Please let me know. Thank you

you thought I might wonder what happens to some of the people I assist, and in this case, its a miracle. Merry Christmas, Amy

Your creative writing abilities has inspired me to start my own Blog Engine blog now.

This is a beautiful story. I will have to share this with the class.