It's a rosary day. We've added more rosaries to our schedule, since we had a lot of 'down time' sitting around at the hospital and life around here is quite a bit slower as well. Our readers are on the same page.
Dear Sister – I love your blog. I do have a question for you. A few posts back you mentioned that saying a rosary on blessed rosary beads earns you a partial indulgence. Seven years ago I suffered a spinal cord injury that left me with the use of only one hand. It is very difficult for me to manipulate a traditional rosary. I discovered a downloadable program called the Virtual Rosary that keeps track of your prayers on the computer. It is very convenient for someone with my physical condition. That being said, do I not receive a partial indulgence because I say it on the computer? Please help!
When a person prays the rosary, do they say "amen" after each prayer? For example in each decade of Hail Marys are there 10 amens or one at the end? I am not asking to be smart aleck. I have never heard anyone pray the rosary. I thought I would try it for a week and see what happened. I found the prayers online, but wasn't sure about the amen part. (And what has happened so far, is that Catholics are coming out of the woodwork. For being the Church Militant, there are a lot of you in the secret service, apparently! But all of a sudden I'm meeting a lot of you. )
Let's take the second question first, since that's an easy one. Yes, you say the "Amen" each time as each "Hail Mary" is a separate prayer. You say the "Amen" after each "Our Father", too. All the "Amens" are in there.
There is a bit more to saying a rosary than all those Hail Mary's and their Amens, though. The rosary is a meditative prayer. While you're saying all those Hail Mary's and their Amens, you are supposed to think about the life of Jesus as seen through the eyes of His mother. The very human, the very divine and the human/divine, all sitting around the breakfast table.
Actually, the breakfast table isn't in there.
When you look up the prayers online there, also look up the Mysteries of the Rosary. You can choose your own set, although the Catholic Church has made it even easier for you by setting up a chart of which Mysteries to contemplate on which days of the week. There are four sets. That should keep you very busy, rosary-wise.
We're delighted you'd like to try it. We'll be sitting around the campfire with our shields and armor, cheering you on.
The Rosary/Indulgence thing is a bit more complicated to explain. For one thing, there are several types of indulgences to be gained from saying the rosary. Let's start with why that would be the case.
To gain an indulgence, you're going to have to do a little something extra. The more extra work you do, the greater the indulgence. This is a situation that has evolved over time in the Church.
It's why St. Francis of Assisi invented the Stations of the Cross. 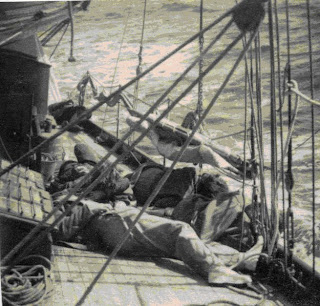 Back in the day, people who went on a pilgrimage to the Holy Land and walked in the path of Jesus on His way to Calvary got the elusive Plenary Indulgence. You have to consider that, back in the day, going to the Holy Land wasn't booking a seat on Priceline with William Shatner and finding a great hotel deal. It was an arduous trip from wherever you lived in Europe, since America hadn't been invented yet, by horse and/or on foot and by boat. You might not even survive the trip. You would be gone for months. It was crazy expensive.
Not everyone could even consider making such a trip. If you were sick or old or poor, forget it. Someone pointed out that this wasn't exactly fair, to grant people who were young and healthy and rich the opportunity for a plenary indulgence while the rest of us sit on our old poor arthritic hands. St. Francis of Assisi had the brainchild to set up a walkable 'Stations of the Cross' for the rest of us. 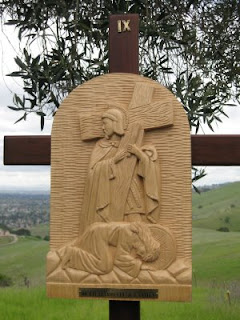 That's why you have to actually walk them, by the way, and not sit in your pew and crane your head around and think about them. You have to do a little something extra.
With that in mind, here is the Rosary list of indulgences.
"A PLENARY INDULGENCE is granted, if the Rosary is recited IN A CHURCH OR PUBLIC ORATORY OR IN A FAMILY GROUP, A RELIGIOUS COMMUNITY OR PIOUS ASSOCIATION; a partial indulgence is granted in other circumstances. "Now the Rosary is a certain formula of prayer, which is made up of fifteen decades of 'Hail Marys' with an 'Our Father' before each decade, and in which the recitation of each decade is accompanied by pious meditation on a particular mystery of our Redemption. "The name 'Rosary,' however, is commonly used in reference to only a third of the fifteen decades. "The gaining of the plenary indulgence is regulated by the following norms: "
I don't see one word here about using blessed beads! If you ask a priest, they will tell you that you have to use blessed beads, and even some of the virtual rosary sites bother to mention that you have to use blessed beads to gain the indulgence.

Some smart cookie changed the rules! St. Francis must be smiling!
For a complete list of everything for which you may be indulged, click here.
Posted by Sister Mary Martha at 11:20 AM

Sister, I think the confusion around blessed beads comes from # 35 of that long list. The indulgence around using a blessed Rosary is different then the indulgence for reciting the Rosary.

Here I am, your protestant fan, with a confession: I bought CD's a couple of years ago of Sister Angelica (EWTN) and the nuns saying the rosary, because it's so peaceful and makes me feel calm and serene. If I'm having trouble going to sleep, all I need to do is listen to the Rosary. Isn't that peculiar? My mother is turning over in her grave, I'm sure.

What a timely post! Just yesterday my 7-year-old came home with a rosary from her teacher (she attends a Catholic school.)

So last night we sat down with my 10-year-old and said the first decade of the rosary (I didn't want to overwhelm them.) I've been wanting to introduce them to the rosary for the last year but haven't done it. My plan was to start up this summer but I expected resistance.

To my great surprise they were very excited and interested. We all took turns leading the prayers and they're excited (as I am) to pray some more.

My question is this: How and when do we mention our intention for that recitation. My brother recently died and while I pray about (and to) him often I'd like to pray on his behalf when saying the rosary.

Is that something that must be stated at the end of the rosary or at the beginning? When praying with my kids do I have to state that intention out loud or can I say it silently to myself?

Can each of us have a different intention when praying? How does all of that work?

Also, is there anything strange about chatting with my brother now that he has died? I don't feel like I'm forsaking God and worshiping him rather I feel like I'm having a one-sided telephone call with him.

Most of the time I tell him things that I'm thinking about which usually start out, "Dude, you're *never* going to believe this."

I'm aware that no one knows for sure, but do you think he hears me? He was ill and bedridden with MS for a very long time and we'd talked about his death. I always told him I expected him to say hi after he died in a dream and that he had to prove it was really him and not just my subconscious mind dreaming about him.

He said he'd drop by and while I know it's probably not going to happen I'm still hopeful that he'll let me know in some concrete way.

I suppose the bottom line is that I'm not confident in my own spiritual views and I am always looking for someone in the clergy to tell me I'm getting all of this right.

Just wanted to say "Hi." Told ya so! Are you taking good care of the dog?

Hi,
I love reading your blog so I decided to award you the Sunshine Award!
http://faithfulcatholicgirl.blogspot.com/2010/05/sunshine-award.html

Sister, since your reader mentioned that she has less trouble using a computer than traditional beads, perhaps an online scriptural rosary would be of help.
http://www.scripturalrosary.org/
and
http://www.cptryon.org/prayer/child/rosary/site.html
A scriptural rosary takes a little more time, but it helps with focus and meditation.
There are also audio rosaries, including Mother Angelica (EWTN)
http://www.catholicdoors.com/misc/rosaryonmp3.htm
May your reader one day be able to use a traditonal rosary. There's nothing like having a favorite set of beads. I often say the rosary with one hand, since my rosary is usually hiding in a pocket while I'm out and about. All the more reason to buy clothes with pockets.

I didn't appreciate that Anonymous.