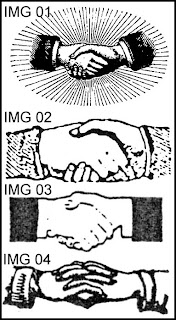 Apparently I misspoke when I said that the reason one shakes hands with one's right hand is so the left hand could be ready with a sword if the hand shake didn't work out so well.
A kind reader pointed out that it's the other way around. One shakes with one's right hand to show that there is, in fact, no sword coming, since the majority of people are right handed and would brandish their swords accordingly.
I'm not sure I buy it either way. I feel pretty confident that right handed hand shaking developed because of the deep cultural roots of the left being unclean and most people being right handed in the first place. There was a time when pretty much everybody used their left hand only for...their toilette. It makes sense that people would only extend the right hand, no matter if they were right or left handed, in friendship and solidarity, if we all knew where that left hand had been.
Ironically, it means that all the left handed people were probably quite a bit cleaner than everyone else, since they were using their 'good' hand, that is to say, the hand with more dexterity. 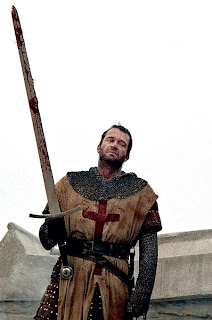 This all reminds me of a website I found once that explains a long list of traditions and practices, like carrying the bride over the threshold (which according to some sources, also involves the devil). The explanations all made perfect sense to me. I'm pretty sure the sword one was in there.
Several people told me later that it was all untrue.
How did they know? It all sounded very plausible.
The sword thing is the least plausible explanation I have heard for a tradition. It's not like every single person had a sword. A knife, maybe, but not a whole big sword. It doesn't make sense to me that a handful of people saying to each other, "See, I'm offering you the hand that would otherwise kill you, which means I won't be killing you just now, so we can all relax" would somehow translate into an across the boards demand for right handed handshakes.
Maybe it's just me.
Posted by Sister Mary Martha at 11:26 AM

It's my understanding (perhaps mistaken) that the original handshake actually involved grabbing the other guy's forearm, to make sure he didn't have a knife hidden in his sleeve.

Despite your dislike of it, the reason people shake their right hands is to show that they are not concealing a weapon. Every one carried knives, if only to cut their cheese and bread.

And, today's saint is Philip Neri.

There are always several explanations for how and why we do things. I think the answer would probably include a little bit of all.

Sister,
You said left first so I'm not sure what the implied mistake comment is about.

In provincial Philippines, a handshake means congratulations. This is one reason people there have a hard time adapting it for the "sign of peace" during Mass (people have wondered why they should be congratulating each other at Mass), so the preferred sign of peace there is simply a reverent bow of the head with your hands folded.

People kiss their hands after the sign of the cross because out there, the gesture for "Amen" is the folded hands. Now, if you're carrying a rosary or a prayerbook or a baby while making the sign of the cross and you can't fold your hands, you feel you still have to touch something with your free hand, and the most obvious place is your lips.

The Spanish sign of the cross, adapted by former Spanish colonies (including the Philippines) consists of using your thumb to make a series of small crosses - first on your forehead, then on your lips, then on your chest, and finally enclosing them all with the big standard sign using two fingers.

Here are the words to the Spanish sign of the cross:

Then switch to the standard sign, using two fingers, touching first the forehead, the abdomen, the left shoulder, and the right shoulder:

Then with folded hands (or touching the lips):
"Amen."

English translation of the Spanish sign of the cross:

"By the Sign of the Holy Cross, deliver us, Lord our God, from our enemies. In the name of the Father, of the Son, and of the Holy Spirit. Amen."

The saint of the day is St. Augustine of Canterbury.

Actually, there is SOME merit to the sword thing--that is shaking with the right hand to ensure that the hand was not on the weapon. When I was in the military, we learned that that is exactly where the salute came from. An opposing camp might send a diplomat over to talk terms. He would salute (hold up his hand and/or raise the visor on his helmet so you could also see his eyes) to ensure that he had no weapon in his hand. And as he would likely be on horseback, his other hand would be engaged in controlling his mount. The handshake may also have developed from there. I am not saying "a single person" would be carrying a sword, but military customs and traditions do get handed down to kids who admire their daddy. Then they become family and social customs especially in societies like the Spartans, whose whole lives revolved around their military.

Most folks do not "Shake" hands anymore, they SQUEEZE THEM! OFTEN CAUSING INJURY!

I am aware that when I was a young person attempting college, those in authority traing the younger generation, preparing them for job seeking... taught theirstudent/clients: FIRM HAND SHAKE!"

Look at old films of foreign dignitaries they do not squeeze each others hands, but gently hold the others moving their arms up and down... a true hand shake!

Satan has managed to twart what was a sign of peace, in many places even in CatholicChurches... a "HAND SQUEEZE" causing pain at a time with the CATHOLICS COME HOME CAMPAIGN in full force...

When one after the Lord's Prayer has their hand injured... Do they really feel they want to come back?