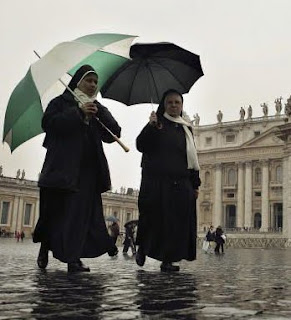 It's raining today, so we can't do what we thought we were going to do, which was work out in the garden. We need to pull some weeds and do some soil amending. We've planted some tomatoes, which we haven't done in a year or so.
We sort of gave up on them in recent times. In a garden where everything does pretty well, even when we rather neglect it, the tomatoes just weren't happening. After two years of terrible crops with almost no tomatoes to speak of, we threw in the towel. Now I see what's gone wrong. The soil is terrible. There is no soil. Just dirt.
So we're going to unplant the tomatoes, amend the soil and replant the tomatoes.
But not today.
Today we're back to square one, so to speak, with the Sign of the Cross. We've solved the 'which hand' problem, I hope. Now we have to talk about what we do with our hand. 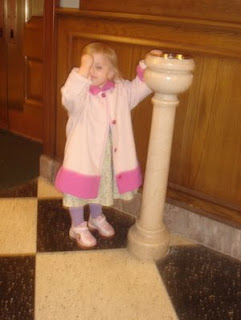 Sister,
I have a sign of the cross Q for you. Why do some folks touch their lips after they make the sign of the cross?
Why indeed?
They are not touching their lips. They are kissing their fingers.
And why are they doing that?
Here's another question for you? Which fingers are they kissing?
Everything we do in the Catholic Church is symbolic. Obviously the Sign of the Cross is a symbol of the Cross, but why touch your' head, your heart, your shoulders? Why not just make a Sign of the Cross out in front of you? 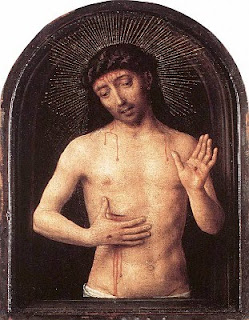 Let's start with the fingers. There is more than one tradition about how to hold your fingers. We do the flat hand method. Using all five fingers symbolizes the Five Wounds of Christ.
And you thought it was just your hand!
Some traditions use the three finger method, the thumb, and the first two fingers. Care to guess the symbolism there?
Holy Trinity.
Then for some people, touching the head represents the Father, the heart, the Son and the shoulders, the Holy Spirit. Which seems like a no-brainer, since that's exactly what you're saying at the time, although sometimes we make the Sign of the Cross without saying anything, like before a free throw. 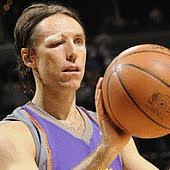 How about those Suns! Who saw that coming? Not me. I'd love to see a Suns/Celtics playoff!
But I digress.
But for some people the symbolism also digs a little deeper in that the head represents God the Father and His Wisdom, and touching the heart or stomach next represents the Incarnation, specifically. I've forgotten what these folks thinks about while touching their shoulders.
But then, I've forgotten more than a lot of people know in the first place, so I don't feel too bad about about forgetting some symbolic stretch.
So, since your hand is representing either the Five Wounds of Christ or the Trinity, that's what you're kissing when you kiss your hand at the end.
Of course, a lot of people just do it out of habit and aren't really thinking anything. And a lot of people are holding something that they are kissing, like a rosary, or the cross on the rosary.
And then....some people make a little Sign of the Cross with their thumbs on their foreheads and everywhere else while they are making the Sign of the Cross with their hands, thus making a Sign of the Cross Squared. Or would that be a Sign of the Cross to the second power?
I'm not good at math.
Or tomatoes.
Posted by Sister Mary Martha at 11:01 AM

You said the other day that rosaries didn't have to be blessed and I thought "What?"

So I looked it up in the CATHOLIC ENCYCLOPEDIA (Sorry, i wasn't shouting, I just accidentally hit the caps lock key. At least now you know my source!)

Here's what the CE has to say:

(a) In addition to the blessings already mentioned for articles destined for altar purposes, the Roman Ritual has formulæ for blessing crosses, images of Our Lord, of the Blessed Virgin and saints, church organs, processional banners, new bells for church uses and for other purposes, dress and cinctures worn in honour of Our Lady and of other saints, monstrances, reliquaries, vessels for Holy Oils, church ornaments, clerical habits, medals, pictures, and crosses for the Stations, rosaries of all the recognized kinds, water, candles, the Trisagion of the Holy Trinity, the different scapulars of Our Lady, of Our Lord, of the Blessed Trinity, of St. Joseph, St. Michael the Archangel, and other saints. Most of the objects just enumerated, as, for instance, rosaries and scapulars, receive what is called an indulgenced blessing, that is to say, by the pious employment and use of them persons are enabled to gain an indulgence."

It's my understanding that a rosary isn't a sacramental unless a priest has blessed it.

I kiss my thumb after I make the sign of the cross -- I was taught that the thumb and first finger make a little cross, so when you kiss your thumb you're "kissing the cross." I'm also in the habit of touching my heart after crossing myself when a priest blesses me, after I saw some Byzantine friends do it.

Kissing the thumb and first finger as a little cross after making the sign of the cross is pretty common in Hispanic communities.

Even Bing Crosby knew to Sing in the rain!

Regardless whatever befalls except and embrace it singing a New song from your heart... and out loud of your mouth...
And His Joy Shall Raise you Daily and you will never go crazy...
http://HisJoyRaisesMeDaily.blogspot.com
Rejoicing Always that HE never has and never will install voice mail... http://NoVoiceMail.blogspot.com/

and you'll never ever be blue... 'cause HE's Got YOU... and You got HIM and never again... will the blues come to you!
http://DoTheBluesGotYou.blogspot.com/
God Bless You and keep on letting His Joy Raise you up... leave the fussand simply TRUST HIM!

Thank you for all the information and entertainment...I was sorry to read about your soil problems. Here is a link that explains how to build up garden soil while limiting digging and weeding:

I hope that is helpful,

For accurate information and other matters of faith and morals, read the "Catechism of the Catholic Church, Second Edition" revised in accordance with the official Latin text promulgated by Pope John Paul II, first printed in the US in March 2000.

Every Catholic home should have one. It covers issues of today as well as the topics in the old Baltimore Catechism.

Its easy reading for anyone over age 16.

Hi Sister,
I have 2 beautiful girls a 17 month old and a 5 month I was put on thyriod medicine that can cause phyical deformitys like cleft lip and I was on another medicine that can cause heart defects (I'm no longer on that medicine)I wanted to go off all medicine but my doctor says with my levels I could lose my baby this pregnacy wasnt planned but its still my baby and I dont want anything to happen because of something I did. Do you know a patron saint for preventing heart defects and physical abnormalitys in babies also for faith in my doctors and you might want to give me one for patience if 1 more person comments on how close my girls are I'm going to scream

I see not a place to submit questions... so I am placing this question here in comment box because this is the only place I see to put it.

Though I am Catholic and have been since my birth, and I am almost a Half-Century! I know maybe a mere youth to you...

And since the purpose of your blog and all of mine are to bring Catholics to a deeper closeness to GOD and draw protestants and non-believers to The Lord and to Catholic Church... For HE is returning for a United Church without spot, blemish or wrinkle...

For the sake of non-believers and possibly jews, muslims, or protestants reading your blog.... non Catholics...

I think it would be nice in an age of TERRORISM that is real... satan trying to destroy us all...

Respectfully, I would appreciate you explaining what you mean by TERRORIZING CHILDREN on your profile page...

For those who are not Catholic, they maybe scared by that statement of yours and not pursue becoming Catholic.
http://HillsThrillsMonkeysAndMoleHills.blogspot.com

I would appreciate if you would put your smiling face under my FOLLOWERS on my blog... to encourage me as I continue what GOD has required of me as well!

I appreciate you Sister Martha!

EstherStephanada Can & you can too...DO All things in and Through and For HIM!!

We Can We Can for we are HIS CanyCan Can Girls and HIS Cany CanDo men!

For HEAVEN'S SAKE, Esther! "Terrorizing children" is a tongue-in-cheek reference to the bad rap we all got in the 40's and 50's when Catholic Schools were in their glory years. No one in their RIGHT mind takes it seriously, and I wouldn't worry too much about offending non-Catholics, and especially not Jews, Protestants, or Muslims. If that's all it takes to "scare anyone off" from becoming Catholic, they couldn't take Catholicism anyway. Sheesh! What would they think when we tell them we HAVE to confess our sins to a PRIEST!!!???? Here's what I would rather respectfully request: that people stop using CAPS and EXCLAMATION POINTS!!!!! as they are very distracting. CAPS means YELLING, and exclamation points are just plain distracting unless they are absolutely necessary!!!! (PUN INTENDED!!!!) I tried to read your blog, and I could not. The caps and exclamation points were TOO DISTRACTING!!!! "Sister" Mary Martha's blog is fine as it is. We "get it" and appreciate her, just as she is.(You think she's really a nun, don't you?)