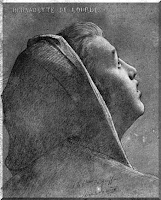 Hi Sister,Speaking of water, I recently studied for a semester in Rome, and during my semester, I traveled to Lourdes. I brought back several vials of water from the spring, but I'm not sure what to do with my own vial of water (given to me by another friend who went there), or what to tell people who I give these bottles to when they ask me what to do with it. I know it's not holy water unless it's blessed by a priest, but just what does one do with water from Lourdes?

I'll tell you one thing you can't do with it: take it on a plane. I'm not kidding. You can't take any kind of bottle of water through airport security since the 2007 terrorist attempt. It's been the bane of the pilgrims existence ever since, not being able to lug gallons of the stuff home.

But it seems you must have packed it in your luggage, as it arrived back home with you.

We have quite a few regular readers who are not among the Catholic faithful, otherwise known as the the Separated Brethen, nee "Lesser Faiths" and quite a few who are newly Catholic who still can't quite get themselves to fully embrace the "Mary Thing", Catholics have. If you are among this group, I urge you to catch up on St. Bernadette and what happened to her in the "pig-sty" grotto at Lourdes by going here. It's a lot to read, but really fascinating. Let me know when you get to the "I Am the Immaculate Conception" part and your thoughts on that, because we'll be discussing questions about Mary dogma in days to come.

In a nutshell, though, in 1858 Our Lady appeared to 14 year old Bernadette over and over again, told Bernadette to dig in the mud and a healing spring burbled up, eventually producing 40 liters of water per minute...or hour...I forget. It's a substantial amount of water, though, because people have been taking it home by the gallon since about 1861. The water is the source of many a miraculous healing.

Not poor little Berndette, however. Our Lady told her her goose was cooked, healthwise, and that the water would never help her, that Bernadette's reward would not be in this world. Berndette died around the age of 30, after a long agonizing illness.

Happily for us, 14 year old Bernadetter wasn't sitting around reading the 1858 version of "Twilight". She was saying rosaries and praying for the conversion of sinners. Important to the story of Bernadette and Our Lady, is the fact that Bernadette could barely read at all.

And that's how everybody found out that Bernadette was actually being visited by the Mother of God, because when the parish priest finally asked Bernadette to find out who this woman was, the woman responded with utter nonsense, as far as Bernadette was concerned. She had to repeat it over and over to herself, all the way back from the grotto to the door of the rectory because it was gibberish to her.

"What is your name?"

"I Am the Immaculate Conception."

The priest's jaw dropped. Jaws dropped at the Vatican.

And you have some Lourdes water. What do you do with that?

Personally, I would just hang on to it, the way you would a relic or a sacramental, just since it's in a nice bottle and you brought it all the way from Europe.

But....at Lourdes, people drink it or bath or wash in it for it's healing power. I wouldn't do this with it if I just caught cold or something. Not even for food poisoning, unless I was really about to buy the farm because of it. If I was actually going to use it, I'd sprinkle it like holy water if someone were really desparately ill or injured.

The rest of the time, I'd put it where I can see it often and let the story of Bernadette and the Lady take my breath away and pick my jaw up off the floor.
Posted by Sister Mary Martha at 5:52 PM

When my husband was in the hospital recovering from an esophagectomy (he had cancer of the esophagus) he wasn't allowed food or water for the first 6 or 7 days but he was allowed a tiny fragment of the Eucharist. Since I am a Eucharistic Minister I brought him communion everyday and gave him a single drop of Lourdes water with it. He recovered remarkably well.

well... that makes sense if ducks can splash in it... i'm sure you send it ahead and have it mailed home... /,") so i miss the lovely notes our nun's use to tune their voices when they taught us... peaceful sets the mood... much appreciation, thinking on your thoughts... the blessings.