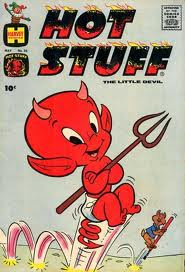 Hi Sister! This may seem odd, but do you have any words of wisdom concerning demonology? I'm just curious as to how you would describe how demons work in the world and what sort of natural phenomena may or may not be attributed to them. Thanks!
Yes, it does seem odd. I was completely thrown by anyone asking about demonology, which means exactly, "The study of demons". That's different than the second part of your question about how demons work in the world and what sort of natural phenomena could be attributed to them.
I think I need a nap already.
Before my eyes clank shut, we can get rid of the first part and the last part of your question. I think no one should study demonology. There is such a thing because the belief in, or fear of, demons has always been a part of human history. The idea that demons are ruining one's life is as prevalent in the life of a savage living on a remote island three feet wide as it is in the parlors of the tea sipping cultured and it always has been, even before the invention of tea sipping. As a result, there is a lot to know about what humans have thought about demons, from the ancient Assyrians, Greeks, Iranians, Persians, Chinese, Israelis and all the way up to Christian culture. The Assyrians and the Iranians, in particular, had elaborate demonologies.
But it's not something you really need to look into, unless you're some kind of theology/history major and you have a test coming up on Azazael and a paper due entitled "Who Is Liltith?"
The problem with the actual study of demons is that, for our intents, the information is full of theological errors. In other words, you will be up against heathen legend vs. Christian theology. It would be very difficult to sort it all out on your own. St. Albert the Great has some advice for you: "It is taught by the demons, it teaches about the demons, and it leads to the demons."
Demons do not control natural phenomenon, so you can let that go. One might argue that the devil might have some effect on what happens because of natural phenomenon, though. We'll come back to that. 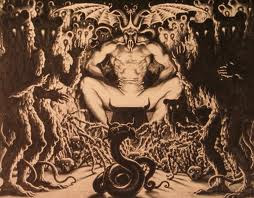 That leaves us in the middle. What's the deal with the devil?
The devil is a fallen angel. Fallen from where? Heaven. God's favorite angel, Lucifer, decided one day that he should be equal with God. This is a problem. Angels are pure spirits, all good and holy and very, very smart. But only God is God. So Lucifer's uprising backfired and all the angels that went bad with him went to Hell with him. 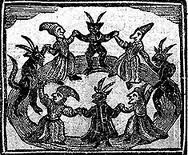 I have to stop here for a moment and reflect on the outlandish silliness that is "Satan worship". The whole reason that Satan is Satan is that he is not equal to God. So why are you worshipping him? Crazy. Just the other day at the grocery store I saw a lady dressed as some sort of vampire. It's August, so we know she wasn't trick or treating. This was a style choice.
Sad.
Anyhow...where was I? Generally speaking, when we say the "devil" we mean Satan (formerly known as Lucifer) and when we say "demon" we mean any of those other fallen angels. The Catholic Church teaches that Satan and his pals are alive and well and they are relentlessly trying to grab your soul. How do they work in the world? Against you, that's how.

This makes it very, very hard for us, because we really, really don't need Satan's help to sin. We are weak enough on our own. But here comes Satan and his demons to make it even harder. It's bad news. These aren't just some kind of crazy little monsters with pitch forks running around giving people flat tires so their days start off badly. These are fallen angels. They are very smart beings. Satan doesn't have to waste his time trying to get you to watch more television and not eat your vegetables. Satan can take a look at the evil in the world, that evil we perpetrate all on our own, and orchestrate it. That is his power.
So did Satan cause Hurricane Katrina? No. You'll have to ask a meteorologist what causes a hurricane. But did Satan help in the aftermath of stranded souls and carpetbagging? I'm quite certain he did.
Posted by Sister Mary Martha at 6:25 PM

On the topic of fallen angels, I was just wondering if it is true that we have all been assigned a fallen angel, much like we're assigned a guardian angel in that it always stays by your side, but instead of protecting you it is always tempting you?

Sister, I'm pretty sure that it's not okay to gossip about people on reality shows, but is it licit to gossip about fictional characters on television shows and in books?

Hi Sister,
I really enjoy your blog. after reading your entry on demons I wanted to ask you a question that has always bothered me: why didn't God destroy the fallen angels like he destroyed the evil in Sodom and Gomorrah? Just wondering if the Church teaches anything about this. Thanks for any help you can give.
Your faithful reader

The question above about God destroying Sodom and Gomorrah but not the fallen angels got me googling but it's getting a bit overwhelming so I'll take St. Albert's advice and wait for your answer to this one.

I guess I'll through in my 2 cents :) In answer about destroying the fallen angles vs. Sodom, it's important to remember that God loves all of creation. If God didn't love it, it wouldn't exist (see St/ Thomas Aquinas on this one, basically, God's love and our existence are directly related). So God loves even the fallen angels, which is why they exist in the first place. To utterly destroy them, He would have to hate them, and God can't exactly hate a part of creation (>< it's complicated).

Anyway, even though God demolished the cities of Sodom and Gomorrah, and a lot of people died, those people weren't "destroyed" as there soul continued on after death, like all souls do. Hope that helps. Sister Mary Martha can probably answer it more clearly than this, but that's the gist of it.