Mary All Over Town 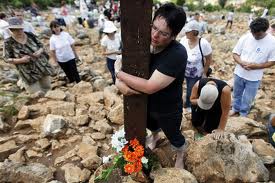 And you will continue to hear mixed things about it, mainly because people who go there are crazy for it. Perhaps I shouldn't put it that way.  "Deeply moved by the experience" would be another way to say that, wouldn't it?

On the face of it, Medjugorje is quite a phenomenon.  Six children receive regular visits from the Blessed Mother.  She brings messages of peace.  The town, in a war torn country, becomes a cradle of peace and prayer, an oasis of all things good. 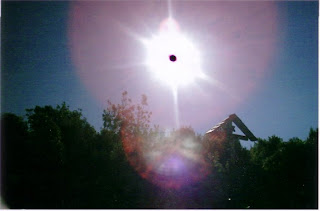 Meanwhile, virtually everyone who visits there is impressed by the experience.  Rosaries turn to gold,  a bleeding Host appears in the sun, statues drip with holy oil and visitors leave with a sense of peace that is profound. This has been going on, with no let up for over 20 years now.

The visionary children have grown up and gone away, and one by one, Mary stopped appearing to them, or appeared less frequently.  At least one of the girls still lives in Medjugorje and Mary appears to her once a month.

Of course, the Church was called upon to give the apparitions Her blessing, so the matter has been examined and studied, and while the official word from the committee is  "cannot be affirmed as supernatural".  Finally, in the early 90's, the local Bishop of Medjugorje wrote a letter stating that he was not a believer (which is putting it mildly). 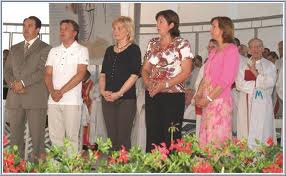 He had a lot to say about it, but he basically made this point: What is Mary's problem that she can't seem to get her point across to six people for over 20 years?

On top of that, the visionaries have been given 'secrets' about the future and whatnot and the reason that Mary is still appearing to some of them, or two of them or one of them or whatever it's boiled down to now, is that she hasn't given them all their secrets yet.

For me, the most compelling "agin it" argument comes from the commission itself.  These are the people who spent three years interviewing everyone, pouring over diaries and documents and writings and studying everything with a fine toothed comb.  Two of them thought the visions were real, one abstained from voting, two thought that the visions were real at first, but no longer are and eleven of them said the whole thing was not supernatural.

If I had a vote, I'd say no. I haven't been there to have my rosary turn to gold, but this passage from the Bishop's letter has stayed with me.  The visions were initially on a hill.  And then..."she came into houses, into forests, fields, vineyards and tobacco fields; she appeared in the church, on the altar, in the sacristy, in the choir loft, on the roof, on the church steeple, on the roads, on the way to Cerno, in a car, on busses, in classrooms, in several places in Mostar and Sarajevo, in monasteries in Zagreb, Varazdin, Switzerland and Italy, once again on the Podbrdo, atop Krizevac, in the parish, in the rectory, etc. It is certain that not even half of the places where the alleged apparitions have taken place have been mentioned, so much so that an earnest man—who venerates the Madonna—asked himself: "My Madonna, what are they doing to you?"

What are you supposed to think?  Whatever you like.  You don't have to believe that Fatima was a supernatural phenomena, either.  The Church says it was, but as it came through "personal revelation" (through the visionaries of Fatima), you can do with it what you will.

There is only one thing, as far as I can tell, that you are forbidden to do, and that is to organize a pilgrimage there based on the idea that the apparitions are real and have the blessing of the Church.  You can still have a pilgrimage there and come home with a gold rosary.

Paraphrasing St. Augustine:  In necessary things unity, in undecided things freedom,and in all things charity.
Posted by Sister Mary Martha at 11:53 AM

Thank you Sister for this clear concise explanation I have often wondered about the length of time this has gone on.

If you are worried about the length of time the Blessed Mother is with us here on earth, then what will be your reaction when you reach heaven and have the rest of eternity with her?

The kingdom of heaven? It’s here. It arrived with Jesus. And he teaches us that he is with us always.

Medjugorje? God’s merciful love. Tap into it. Receive it. Enjoy it. Live it. There’s more to come. That’s his promise.

I'm with you, Sister, and I don't give Medjugorje much thought because a) I can't spell it and b) there are many other completely approved apparitions that I can and do listen to. I don't care much for other people's secrets, and don't find them edifying. I do try to treat the whole thing with respect and feigned ignorance because I know many people who really were moved by their visit there. I have the rosary though, and the Divine Mercy chaplet, and the liturgy of the Hours, and the 7 sorrows devotions, so I feel pretty full up.

@Pilgrim, I am not worried, I know that Jesus and his mother are here on earth with us, we would be lost otherwise. I had simply wondered about it.
I have not been interested in making the journey to Medjugorje, as I have reserved judgement until such time as it receives official church approval. there are other approved sites here in the USA and around the world that I would like to visit.
I too have the Rosary, and the Chaplet of Mercy and let's not forget the Mass.

I wonder what makes you wonder? :) Curiosity, perhaps? People give a range of reasons for travelling there. All I know is that for whatever the reason, Our Lady ensures that they do not return home empty-handed.

I think most of us will be a long time dead and buried before the Church gives its approval to Medjugorje. The apparitions will supposedly continue until all the seers have died and it would be a great act of faith by the Church if it was to give a nod of approval before the apparitions have ended.

But the Holy See may give Medjugorje tacit approval in some way, perhaps with shrine status. It has already issued statements that the pilgrims must be pastorally supported and that is happening.

Then the so-called “secrets” may provide more than an indication that the apparitions are genuine. These 10 “secrets”, apparently, are to be announced by a priest during his lifetime. I think he is well into his 60’s already.

So if the “secrets” do come to pass after announcement, then the Holy See may not have to give any “approval”. The secrets will confirm the phenomenon.

Primarily, Medjugorje is Our Blessed Mother’s call to reconcile with God and each other – and, as Mother of the Church and spouse of the Holy Spirit, she gives instruction and encouragement in ways of achieving this.

Hi, Sister. My roommate is driving me crazy. (And vice versa.) Any saints for us?

God the Father has visited me for almost 20 years now. I have no proof to offer you. Twice I met him in Heaven and when I returned to my body I could not recall what He looked like, except that He is the most beautiful of everything. I am not a saint and I am not worthy of His visits. But God made us in His Image and He seeks out His own friends, special to Him without the permission of the Roman Catholic Church. He has told me many things that only pertain to my own life and despite that I have told Him that He is too important to bother with my small affairs, He continues to come. It is His choice and I respect it, although it is beyond my understanding as to why God finds interest in me. I hope that by sharing my story it gives hope to everyone that God and His Saints take interest in all of us. We just need to listen, including doubting Thomas'.

Hmmmm. Well, anyway, I think you answered the question swimmingly, SMM. Not only hasn't the Church approved it, but 2 Bishops in a row have denounced it, if I'm remembering correctly. Our good Mother Church takes her sweet time with matters such as these. I think the wisest path is to wait and see what She says. She's never led us astray before.

Meanwhile, as SMM said, there are other approved sites to visit (with indulgences- wooo hoo!).

Oh, and I should mention that I have dear family members who are simply devoted to the place, and have visited multiple times. I'm not against it... but neither am I FOR it.

Maybe you've answered this already. are the other Christian denominations in Purgatory when they die? If so, that means they have no one to pray for them, right? So we should make sure to pray for them especially. I have heard there are prayers for the days of the week and the lost souls, can you explain? Love the site and the work you do!

Dearest Sister, Far be it for me to correct a Bride of Christ, but I am sure that my comment, as "Anonymous," was edited by you. When God the Father first revealed himself to me, I saw beauty in Him that none in the universe could rival. He then revealed Himself as pure truth and then as pure justice. I am sure that God has many other qualities, but chose at the time to only show me three. As for the truth, it is a path that I now never stray from. I am sure that I commented in writing about God having spoken to me on my way to the horses. The place had no bearing on God's presence, it was what was on my mind. I was very sad over the biological father that I have been saddled with in this life. Suddenly I felt a peace that can only be granted by the Holy Trinity and I heard the Voice of God telling me that He had given me(a Priest, I shall not name) as my earthly Father. Truer words could not be spoken, since it was this Priest that converted me to Catholicism. This takes me back to the horses' stable and the Church's rigid requirement for location. Jesus was born in a stable. Enough said. My thoughts this time are for you only and I am only using your comment page to reach you. May God place a crown on your head for keeping up this blog and putting up with me.

No, Anonymous, I simply hit "publish". Sorry if something you were trying to say got cut off.

Love yourself first and everything else falls into line. You really have to love yourself to get anything done in this world. See the link below for more info.