Tread Thou in Them Boldly

Today is the day the Good King Wenceslaus looked out at the snow that was deep and crisp and even.  Actually, it's not today, it's tonight, because the moon was bright (although the frost was cruel).  The Good King spotted a poor man gathering wood for his fire.  He asked his page if the page knew where the poor man lived, and the page knew exactly where the poor man lived.  So Wenceslaus told the page to make up a box of groceries and stuff with a plan to bring it to the poor man so they could sit and watch him eat it all. 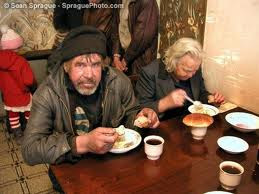 Nothing would have happened without the page, really.  The king wouldn't have known where to find the man and even if he could have figured it out, he would have had to get the groceries together himself.  I'll bet the page carried all the stuff once they went out, too, because otherwise, if you think about it, why did he have to go out there with the King?  It wasn't the page's idea he had already told Wenceslaus where to head.

We never hear anything about what happened once they reached the poor man's house. We are more interested in what happened on the way, when the poor page nearly froze to death but was saved by Wenceslaus' hot foot tracks.

Today is the second day of Christmastime, a time of hope and love. May your footsteps also leave a warm path in the world.
Posted by Sister Mary Martha at 11:21 AM

The author of the song was a protestant minister and wanted to high light acts of charity rather than, say, Eucharistic Adoration, so he changed the story around.

That's what I was told, and I'd love to know if it's the truth! I care very much because St. Wenceslaus is my name saint. Have you heard this before?