Who Ya Gonna Call?

Sister do you know anything about Chantal a monk that is honored in Mexico? I do not mean St. Jane Francis Chantal.
Thanks,
a loyal reader

Of course you don't, because St. Jane Frances Chantal would not have been a monk.

But no, I've never heard anything about any St. Chantal who is a monk honored in Mexico.  Another one of out readers guessed that perhaps you're thinking of St. Charbel, and I am sure that reader is correct.  St. Charbel is indeed well revered in Mexico.  Here he is standing atop a mountain of prayer requests at the Mexico City Metropolitan Cathedral.

St. Charbel is quite a character.  I am often asked if the Catholic Church believes in ghosts and the answer is yes, sort of.  St. Charbel could well be the patron saint of ghostbusters.  He was canonized because he made a rather ghostly appearance in a photograph.

I didn't mean that, exactly.  I should say, his appearance in a photograph led to his canonization.

In his life, he was a very hermity hermit, living 23 years in monastic silence and fasting continually. He always knelt in his cell from midnight until 9am, even though he had a hair mat on which to sleep.  No one ever saw his face.  He wore a hood, never made eye contact with anyone, and kept his head down. Nonetheless, he was well known in the nearby town as a very holy man and people sought his blessings.

And since this is Advent, the time just before Christmas season, let's also have a look at St. Charbel's death. On Dec. 16th, 1898, Charbel had a stroke and on Christmas eve he laid down on his mat face up with his eyes closed.  He wasn't asleep.

That night there was a huge snow storm and the other monks were afraid that they wouldn't be able to take his body from the monastery to bury it in the church over in town. They were also afraid that they wouldn't be able to tell anyone from the town. How would they get word out?  And even if they did, would that cause people to come out in the bitter raging cold to gather around the body?

And while they were there trying to decide all of that, they were amazed at how freezing cold it was in Charbel's cell of 23 years, the one in which he only knelt all night.  And while they were being amazed, somehow the townspeople got wind of Charbel's death and shoveled their way up to the monastery.

Now it was Christmas Day and the snow was even worse, with blowing, howling wind. But they set off with the saint's body. The wind and snow stopped and down they went. 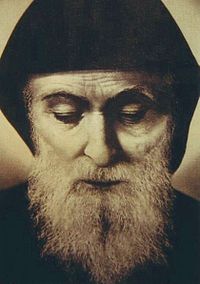 Now we fast forward to 1925, when Pope Pius XI thought about beatifying Charbel.  In death, Charbel's grave had glowed with light.  But these things take time, often centuries.  Then, in 1950, an American priest from Scranton, PA was visiting Charbel's monastery and took a photograph of his tour group.  When the picture was developed, there stood Charbel in their midst.

Who ya gonna call?

Things moved along a little faster after that, with many miracles occurring. Beatified in 1965, St. Charbel was admitted to the Heavenly Hall of Fame in 1977.  He has been spotted time and again in his hood, his eyes lowered as in life.
Posted by Sister Mary Martha at 8:40 AM

Thank you Sister, the mystery is solved. I will pray to St. Charbel to keep a eye in your direction and keep you safe. And thank you for the help for the Gluten free Saint. St. Alice has and will help many.
Thanks again,
long time reader and fan

That is an amazing story.