Please help. Maybe this is the wrong question for a nun, but maybe someone else on here can offer suggestions too. I'm a young single Catholic women called to marriage... where are all the (practicing) Catholic young men at? Oh, I know they still exist albeit few, but where? I have few friends outside of Catholic activities: volunteer work and the young adult group I attend. It seems that everyone there is already paired off, with respect to both relationships and friendship circles. I've been seeking a relationship and friendships for almost 3 years no avail. As far as love and marriage goes, I've been asking intersession from St. Raphael, Mary and Joseph. Thoughts? While my relationship with God has blossomed in this seclusion, I could really use someone to spend Friday nights with. 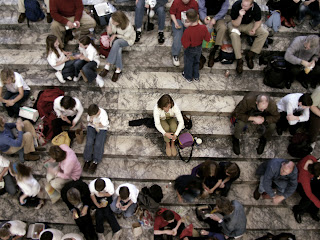 You are already taking all the advice everyone gives, which is to look no further than your church group, as though "Of Course that will work!"  Not if everyone is paired up it won't, unless you are one unethical girl.  Which would defeat the whole idea of finding someone in a church group.

It is disturbing that anyone would be "paired off" in a friendship circle. It seems to me that these are the people you want to infiltrate!  Surely they have other friends and relatives!

Let's take a tip from our "Elder brothers" (as the Pope says), the Jews.  The nice Jewish girls I know have pretty good look finding people at least to date (if not marry).  Why? Because they let their intentions be known.  They ask friends and relatives, "Got a fella for me?"  Dates ensue.

A few years ago, I would have told you to stay away from the internet.  And I'm old, so the whole idea of internet dating still gives me the willies.  Apparently, however, it's time for me to put on my big girl wimple and admit that out of the five happy couples I have recently met on their way to the altar, three of those couples sought each other on the internet.  No one is more surprised than me.

But when I think about it, the truth is there are many people finding many things on the internet. God, for one.  I can't tell you how many readers I've had who have said that reading blogs brought them to the Catholic Church, or back to Her.

Meanwhile, two things: offer it up.  There are worse things that not having a date on the weekend. Tsunami's for example.  Life on the Sahara.

Having no relationship with God, who apparently is very happy to be your date.

Anyhow, St. Agnes is as effective as the internet, as far as I know.

Meanwhile, my recent advice about finding friends applies to adults, too.
Posted by Sister Mary Martha at 5:08 PM

I don't know WHY I couldn't remember St. Agnes and Girl Scouts!!! Girl Scouts have taken a bad hit in recent years, some of it brought upon the group by national leadership, but some of it slander and libel. It got the the point where I, as a leader, contacted the Catholic scout chaplain in our diocese. I'll still carry his letter stating that yes indeed, it is OK to be Catholic and a Girl Scout, but now I'll also seek St. Agnes' intercession. Thanks, Sister!

Re meeting people via the internet ... my sister met her now-husband that way ... my BIL is a VERY devout Catholic and nice guy. They were in some Catholic singles online group, but I'm afraid I don't know details. I'd try that approach, only be very careful about it.

I've got plenty of Catholic girlfriends who married Protestants... that converted. But, I like the advice-- make your intentions known!

I found my husband on Catholicmatch.com I wouldn't recommend any secular dating sites, too big of an ocean to swim through. The best part about the site I used was that it asks questions about what you believe. Do you believe in the tenants of the faith? How often do you go to mass? etc etc. It helped me narrow down my search to people who were more serious about their faith. Plus, you can make friends there too, it doesn't have to all be about dating (or courting). Good luck!

Oh dear me. I still believe in fate. Am too busy working and being a single mom with a large, crazy dog does not give me time to date. Is is too much to ask God to send him my way? So tired of looking.

Maybe it's a little late, but there are lots of really friendly, really holy people on tumblr!