Get Thee to a Monastery!

After my last post, a reader asked if there was a patron saint of pickles. What a card! (as my mother would say).  There's an expression you don't hear any more.  It means "cut up".  You don't hear that, either.

Of course, there is a patron saint of pickles.  I do believe there is a patron saint for everything.  Saints were people and there are thousands and thousands of saints, which means they did everything and experienced everything that everyone else does, including pickles (St. Nicolas), knitting (St. Blaise), dog breeding (St. Hubert), car fixing (Mother Frances Cabrini) and crocheted Kleenex box covers (St. Rose of Lima).

Some saints, however, tried to get as far away from this earthly life as possible, or at least boil it all down to its most basic components.


When you are caught up can you spend some time discussing the different kind of monastics? I know that Benedictines are, but are there others? What do they do? Are they allowed to leave the monastery? Can women live in a monastery? Thank you.

People who give up worldly pursuits to live a life of pure spirituality are called monastics.  The practice goes way, way back to early Christian life, as many people found it was impossible to follow Christ completely and still live in the hedonistic world around them.  They tromped off into the desert to live alone in caves, but soon found it was also too difficult to keep that up without some camaraderie and encouragement.  They moved to caves a little closer to one another, and finally formed walled communities.

Within these communities, it was still difficult to stay true to the purely spiritual path.  In time, the rules were bent and broken and various monasteries had become cushy and complacent.  At some point, someone would enter, look around and say, "What's with you people?!  Get it together!  Here is a list of rules you need to follow!"  And when that happened a new group would often form.  Benedictines too soft for you? Try the Carthusians! 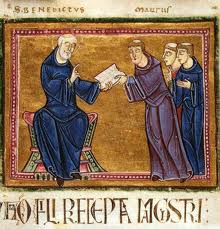 St. Benedict was not the first to draw a list of rules, but his rules are the most famous and still at the basis of all of the other lists of rules.  We also have a list from St. Augustine for the Augustinians.  By the 12th century we see the Franciscans, Dominicans, Carmelites and Servites.

We also see many orders who don't wall themselves up, but choose to live just outside the mainstream and come and go so they can serve the public, because that's what it means to them to serve Christ.  The Augustinians went that way, as did the Franciscans.

Now there are dozens of orders. Let's not forget the Trappists! The Salesians!

There are both men and women monastics, but women are called nuns or sisters and men are called monks or brothers.  Women can't live with men in a monastery or vice versa.  They live in separate communities, although they may be from the same order.

I imagine there are still some hermit monks out there somewhere.

It isn't prison, so you can leave whenever you like, vow to God notwithstanding. 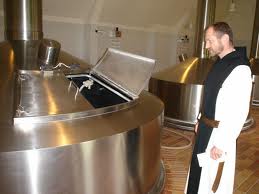 What to they do?  Many of them live a contemplative life of prayer.  But they have to eat, even if they do fast a lot.  So they also farm, and make bread and beer and fancy embroidery and all kinds of things like that.  Each order has a different mission statement, although they are not wildly different from each other.  The rules by which they live may differ greatly, from vows of silence to running a hospital.

To find out about each order, you'd have to read about each one.  It will take some time!  I'll leave that to you.

If you find out which order is famous for their pickles, I'd rather not know.
Posted by Sister Mary Martha at 12:16 PM

Of course there are still hermits. Some are even on the Web!

There may no longer be monasteries housing both monks and nuns, but both the Irish and the Anglo-Saxons had them. St. Brigid of Kildare was Abbess of the most famous joint house, if I remember correctly.

Monastics support themselves with various businesses ... my favorites are the Trappistine nuns who make killer caramel candy http://www.monasterycandy.com/Catalog_&_Store
and the Dominican nuns who make soaps and lotions http://summitdominicans.3dcartstores.com/
Yes, I'm trying to drum up support for these wonderful women who make such fabulous products that I love and they pray all day too! Oh, and don't forget the Camelite monks who make the amazing coffee http://www.mysticmonkcoffee.com/store/storefront.php

The Mystic Monk coffee is most excellent,I order from them frequently.

I bought my Christmas cake from the Benedictine Trappists in WV. They also make the most wonderful chocolates which I purchased in bulk and gave them as pressies....https://www.virginiatrappists.org/history/holy-cross-abbey/
In fact, if we compiled a list of all the abbeys/monasteries which sell things, we could then buy their goodies for birthdays and some such......

Yes, there were joint houses in the middle ages, but they did keep themselves separated for most things.
Beth

The reason they all make (or do) something is in order to support themselves. Many, many people (in my experience, this includes most of your average Catholics) think that the CHURCH supports all these groups. Au contraire, the church will not approve of the rule (i.e., "rubber stamp" the rule, thereby giving it canonical status) unless they can show that they are SELF-SUSTAINING. For those "out in the world," your typical teaching, nursing, and various other Catholic ministeries come with a pay check and health benefits (in the USA, at least). For those still walled up in the monastery, mail-order works well. Some sell candies, soaps, or air time on TV. Now that's a nice job, if you can get it!

@Arkanabar - Yes, there are still hermits, and there are (believe it or not) people who pretend to be hermits! We have a woman in our diocese calling herself a hermit (and she does have a website!) but when I called the pastoral center to verify her claim, I found out she is neither a hermit, nor does she have any canonical status. Apparently, she has gone from diocese to diocese, parish to parish, telling how mistreated she has been (at the previous parish) because "Father So-and-so just doesn't understand my calling." We are trying to get professional help for her. Long story short, don't belive everything you see on the web. I know you don't, but many people follow this blog.

Monastery Gifts is a good clearinghouse for the products. They do include some non Roman Catholic monastics, just so you know. I mean, Orthodox and Anglican Brethren. Did you know that the monks featured in Into Great Silence make chartreuse liquor? Anyone ever tried it? May I put in a plug for The Heralds of the Gospel, who publish a cool magazine?