What with our last two posts being such heavy lifting, let's have a easy breezy question for today. 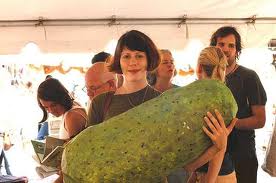 But before we get to that, I must share with you my latest opportunity for suffering.  Yo may recall my Lenten dilemma with the McDonald's fish sandwich and my subsequent food poisoning erasing the problem for a long time to come.  Like the lead character in "A Clockwork Orange", whose new aversion to violence came with an inadvertent aversion to the music of Beethoven, my new aversion to all things McDonald's  has sadly left me unable to enjoy another thing I like a lot: dill pickles.

My love of dill pickles goes a long way back, from always eating a giant dill pickle after a day of swimming with friends and cousins in the summer, to sloppy joes piled with pickles. If someone was putting pickles on my sandwich, they could not overdo it.

Some day I'll enjoy them again.  Meanwhile, the souls in purgatory are getting a reprieve whenever the condiments are passed out.

I won't enter that debate.  I have been to SeaWorld and I had a very, very good time.  I did not sit in the splash zone.

St. Brendan was an Irish monk who set sail with 60 (or 14) pilgrims and 3 non-believers looking for the Garden of Eden.  According to legend, he made 7 such journeys, earning him the moniker "Brendan the Voyager".  His exploits call to mind "Sinbad the Sailor" if Sinbad had been a follower of Jesus. 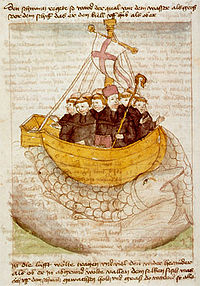 At any rate, on one of his voyages, he landed on an island, which turned out not to be an island at all but a whale.  Or a sea serpent, depending of which translation you're reading.  I believe this also happened to Sinbad, except that is St. Brendan's case, Easter Mass was celebrated on Whale Island.

As fanciful as all of this sounds, there really was a St. Brendan who did travel around quite a bit. He established monasteries in Ireland and Wales and traveled to Great Britain.

But as per his patronage of whale lovers, he returned to the Whale Island several times, so they must have gotten on like gangbusters.
Posted by Sister Mary Martha at 10:59 AM

So, he established monasteries on Wales, but just said Mass on whales. :)

When I was a kid the local movie theater sold whole dill pickles at the concession stand. They were ice-cold, sometimes actually frozen, and served in a little wax paper envelope that collected the pickle juice that dripped down. When we went to matinees without our parents, much joy was had by pouring the icy pickle juice down the backs of the teenage couples making out in the seats in front of us. I'm sure this was a sin, though I don't know which one. At any rate, dill pickles, especially whole ones, always take me back to childhood, like Proust's madeleines.

@Kathy 12:44 pm
Probably the sin of wasting food since you were doing your best as a child to keep the teenagers from committing a worse sin!
@Wendy
How I do love a good pun!

Is there a patron saint of pickles or pickle-makers? There should be.